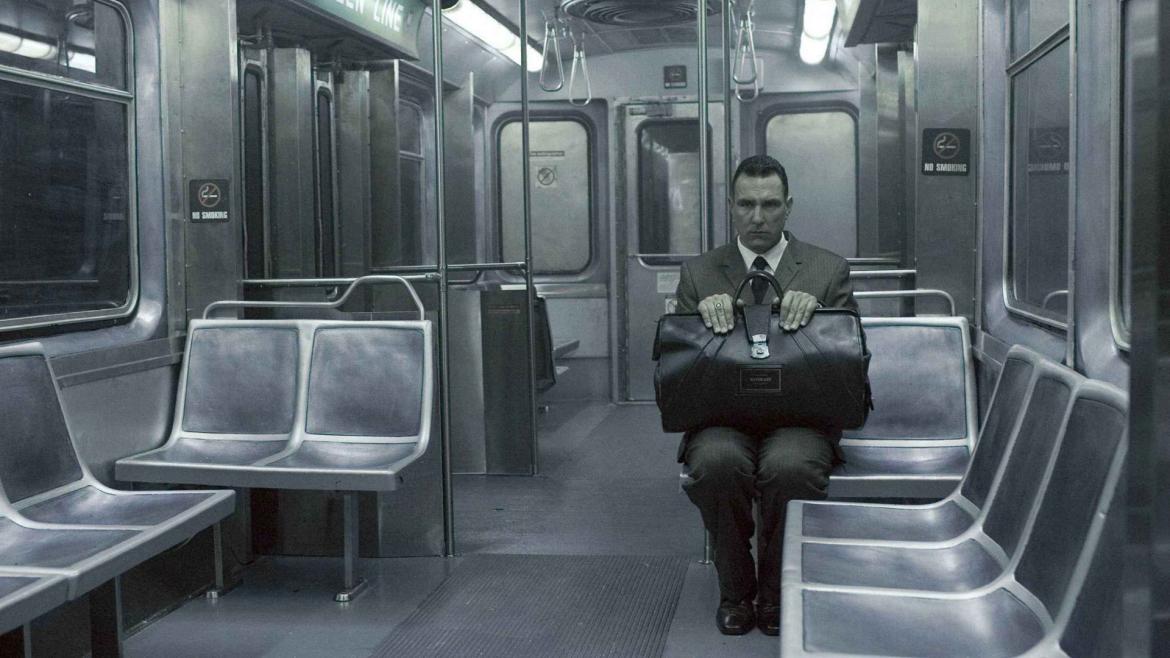 This past week, word spread fast about Ryuhei Kitamura's "The Midnight Meat Train," for all of the wrong reasons. As most genre fans know by now, this film is slated to be the one of the last horror films released by Lions Gate Studios, as evidenced by its very limited release of just over 100 dollar theaters across the country. Is "The Midnight Meat Train" passable enough that it warranted that treatment by Lions Gate?

Thankfully, the answer is no.

On the surface, "The Midnight Meat Train" plays out much like the trailers have suggested. Fledgling photographer Leon Kauffman, played by TV actor Bradley Cooper, witnesses a disappearance in his quest to find a perfect shot for a group show, and subsequently becomes stalk-fodder for Mahogany, the film's poorly-named killer. Despite the cliche, the character of Leon Kauffman is acted straight and well fleshed out from beginning to end. Seemingly menial details about his life, such as his dietary habits for example, seem out of place at first, but become an effective plot point later in the film to accentuate his decline into obsession. His girlfriend, Maya, played by TV actress Leslie Bibb, also plays the non-believer turned believer archetype on the dot. Her performance is strong and central without being too distracting, and when she becomes more involved in the story towards the end, you really feel for her, which is more than I can say for any character in most modern horror films.

Mahogany, despite his name, paints a very grim, lifeless, yet terrifyingly human antagonist. Like any great slasher, he's silent, unmerciful, and yields a signature weapon capable of expedient and convincing brutality. He's physically imposing enough to make you really buy into the stalk scenes yet human enough to make you want to get inside his head. The people behind this film needed to cast a cold, lifeless rock of a person to make Mahogany scary, and they appeared to have hit the mark with Vinnie Jones, despite his occasional Ivan Drago esque 'scowl of doom.'

"The Midnight Meat Train" in many ways is a mix of things both old and new from the genre. Visually, this film feels a lot like 90's classics like "Candyman" and "Hellraiser" with the interplay between tightly framed geometric shots and gritty urban landscapes. Certain scenes and visuals feel as if they were plucked from one or both of those films, but not in a way that ever approaches full on forgery. Also, you'll be hard pressed to not think about the "Texas Chainsaw Massacre" in some of the films 'meatier' moments, however intentional or unintentional the homage may be.

On the other hand, there are some moments where Kitamura's hand becomes a bit too evident in its modernity. His penchant for slo-mo action makes sense in the world of "Versus," but not so much within the unfeeling brutal world of "The Midnight Meat Train." I can imagine that when Clive Barker was penning the original story that this film was based on, he was not imagining some of the more grisly kills in bullet-time slow motion. Also, some of the film's "fight scenes," particularly the one with a throwaway Guardian Angel character, do a bit too much to humanize and weaken Mahogony, as well as take away from the overall aesthetic of the film.

Kitamura is in neither a copycat or completely inept, however. One of the more flattering things that can be said about his direction is that it serves as a reminder of a time when horror directors made deliberate framing and lighting choices that mattered, as opposed to resorting to constant jumps and flashes. For example, Kitamura's use of light in the Subway tunnel serves a harbinger for the oncoming savagery, and the inclusion of that visual, however abritrary it may seem, contributes to the anticipation greatly.

A story by Clive Barker can't be without its share of bleak outlook on humanity and political skepticism, and "The Midnight Meat Train" is no exception. From what I can tell, not having read the original story, I would go out on a limb and say the film seems to stay pretty true to Barker's original. This is because I can't imagine the warped direction this film takes at the end being a product of any mind but Barker's, and as far as I'm concerned, that's a good thing. The jury is still out (probably even at Lions Gate) as to whether or not the general public will buy the imaginative twist, but I breathed a horror fan's sigh of unsettling relief at the far off premise of it all.

The question remains, did "The Midnight Meat Train" deserve a wide release? As a genre fan, I would have to say yes. With enough of a marketing blitz behind it, I think that this film could have been moderately to greatly successful as a summer slasher. I'm not convinced that it's as mainstream friendly as "The Strangers," especially as it plays out in the end, but "Midnight Meat Train" deserves very much to see the light of day, and serves as a fitting opus for the dying horror brand at Lions Gate.