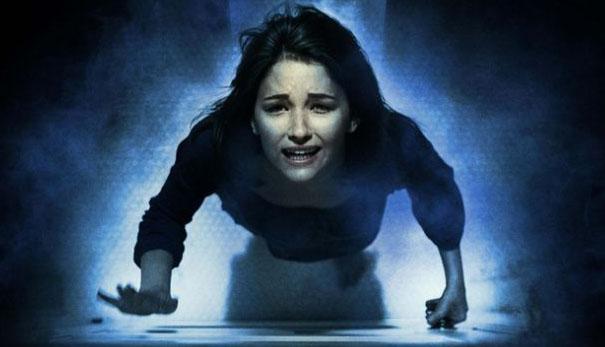 I thought I had adequately prepared myself for the experience of watching "The Haunting of Molly Hartley". I was wrong.

Long time listeners of our podcast may recall the episode we did last year, on the then new release "Prom Night". Out of what turned out to be a very contentious conversation on the film, a really interesting germ was produced courtesy of co-host Jon Schnaars. Jon's point, which I have tried to keep in mind with several different films since that time, is that "Prom Night" was in no way, shape, or form made for me. Therefore, it's a little disingenuous to act angry at the teenagers, or the dialog, or for that matter the PG-13 rating. Really, he makes a good point. It's easy for 20, 30 or even 40 something males to get upset at a film like "The Haunting of Molly Hartley". After all, when 99% of horror is marketed towards us, a film like this has the tendency to make us uneasy. Are we being edged out? Is the younger generation trying to take our horror away? These are fears that, although they make for interesting conversation, are more than likely unfounded.

The point of all that is this, I thought I was prepared for "Molly Hartley". I thought hey, even if this wasn't made for me, I can still watch it and try to appreciate it on a filmmaking level. Even "Prom Night", for all its faults, was actually a fairly well made slasher film from a basic mechanical standpoint. That, my friends, is where that film and this one are vastly different. "The Haunting of Molly Hartley", teen orientation not widthstanding, is a terrible, terrible movie.

We join Molly, played by 20 year old actress Haley Bennett, on the first day in her new private school. Things seem to go fairly stereotypically for her, as the typical "new girl" problems crop up right away. For starters, the only person that will befriend her is the school's Jesus freak. In her first class she manages to become the object of affection from the school hunk "Chase", and as a result, unwittingly becomes the object of scorn from his on-again off-again girlfriend Suzie, played by 90210 star AnnaLynne McCord. Are you enjoying this? Because I can feel my first period coming on as I type it. Anyways, back to the action.

The first half an hour or so is filled with some very benign ghost-movie type action. Molly has visions of her mother, distraught, saying to her "I know what you are!" These scenes are surely setting up a twist to come later in the film, but before we get to that we're subjected to inhuman amounts of high school drama, mixed in with Molly getting nosebleeds and being scared by everyday objects. By the time the film was over, Molly has had the shit scared out of her by a girl coming out of a bathroom stall, the mailman, a dog, and the grand daddy of them all, a CGI ghost in a mirror. Very harrowing stuff, indeed.

We also see that Molly has a pretty gnarly scar over her heart, which we find out about a half an hour in is from her mother attempting to kill her in the not-so-distant past. With her mother in an insane asylum, Molly is living with her dysfunctional single father and desperately trying to come to grips with the reasons for her mother attacking her. While this drama is unfolding, we're treated to more nosebleeds, high school drama, and several scenes with Molly descending into breath convulsions. Stop me if this is getting too exciting for you.

We get a red herring of sorts about 45 minutes into this 82 minute movie (82 minute run times, NEVER a good sign), when it's revealed that Molly has a tumor in her head that may be causing her "hallucinations". After a quick BRAIN SURGERY scene, Molly's back at school practically the next day (naturally), and thinks that everything's going to be hunky dory now. That lasts for all of about 5 minutes, when she has yet another hallucination. This time of her mother actually trying to kill her.

I can feel my own nosebleed coming on so let me try and blast through the rest of this. And here's where the spoilers start, for anyone thinking of subjecting themselves to this. There are two twists in this film. The first twist, which Molly finds out from her mother after she actually DOES escape from the mental hospital and tries to kill her, is that Molly is some sort of super powered devil child. Basically, Molly's mother miscarried her in a bathroom, when some mysterious woman showed up and offered to bring Molly back to life. The only catch was that when she turns 18, she then "belongs" to these people and must be a part of their group. In layman's terms, they sold Molly's soul to the devil in order to save her life. Who these people are, how they got these superpowers, or how exactly they knew she was miscarrying in the bathroom at that moment, are all things the screenwriters never bother to explain.

Presumably they never explain them because they were busy cooking up the next super twist. You ready? Practically everyone at Molly's new school is not only part of this group, but are conspiring against her. Even her love interest, Richy McSexy Hair, is some how in on this too. Her father seems to have not known, but at the same time seems to have not been very concerned about moving her back to the town where this group is apparently headquartered. It all goes down in a final scene reminiscent of something like "Happy Birthday To Me", only in the way that you get the sense at this point that the writers are playing some elaborate, unfunny practical joke on you. Just to top it all off, the film ends on a happy (?) note, with Molly accepting her destiny, becoming valedictorian, and giving a graduation speech set to an upbeat pop song. That part was kind of awesome actually, because it was literally the most ridiculous thing I've ever seen. It's not every day something like that happens to you.

As you can see, the writers of "The Haunting of Molly Hartley" clearly had no idea what the hell they were doing. And if they did, it's entirely possible they're actually evil super geniuses themselves, because I definitely didn't see that ending coming. Игровой клуб вулкан предлагает вам аппарат Book of ra который многие называют книжки, для игры на деньги или бесплатно без регистрации онлайн. Ontop of all that madness, stylistically the film feels like something that would air on the lifetime channel, complete with painfully generic stock music. The only, and I mean ONLY, bright spot in an otherwise atrocious film, is Haley Bennett's performance. There was an actual point in here somewhere when I remember thinking that it's too bad this is the kind of role she's being given, because she could possibly do a decent job with something better.

It's sad, but the only reason I can see why something like this would end up in theaters is cold, calculated, greed. They knew with the right marketing campaign that the teen audience would come out and spend their hard earned allowances on a Friday night. In all honesty though, I have to imagine that even a teenager looking for something to waste their money on while hanging out with friends would look at this and call bullshit. So I'm going to put it out there folks. The studio behind this should have done the same thing that Molly's mom should have... aborted this thing long before it had the chance to ruin my Saturday morning.