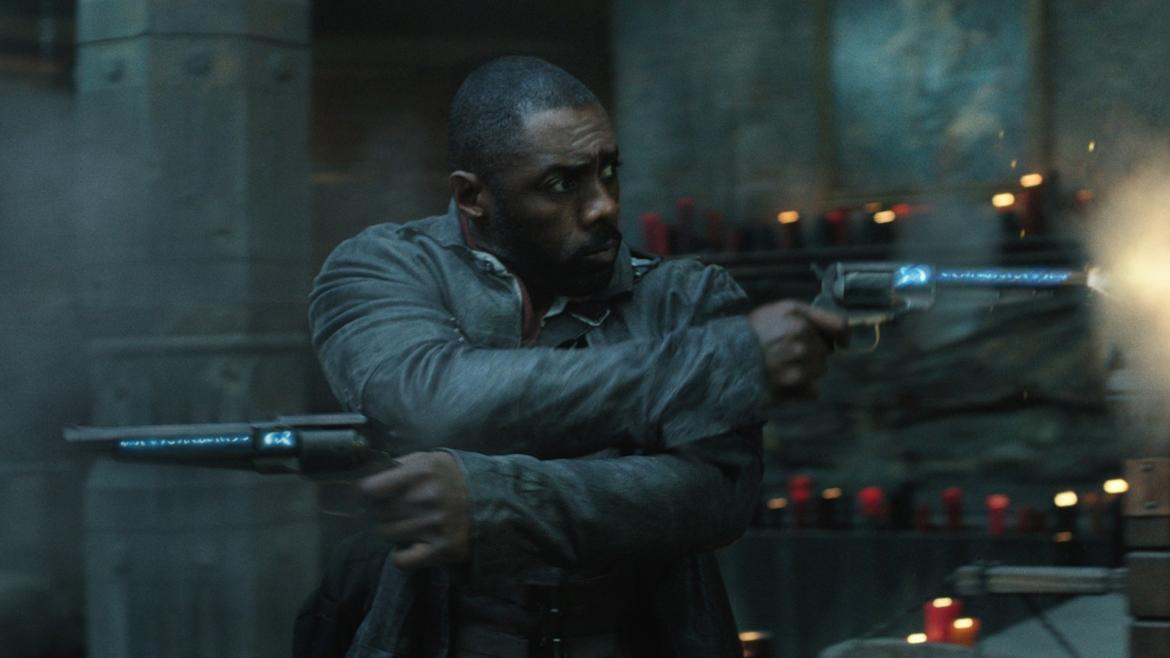 Like a rat-faced creature wearing a human mask, the cinematic adaptation of The Dark Tower is one thing masquerading as another. Its mask is that of a loving ode to Stephen King’s career-spanning, genre and mind-bending book series, one that can also serve as a safe entry for new fans. However, its true self is about as loving an adaptation as a Cliffs Notes pamphlet. Rather than welcoming them in, the hacked up narrative will make little sense to the uninitiated while alienating fans longing for a faithful (or even just coherent) take on King’s classic tale.

The Dark Tower follows Roland (Idris Elba), the last gunslinger – think Jedi with an NRA membership – as he attempts to stop a wizard known as the Man in Black (a joyless Matthew McConaughey) and his crew of humanoid animal helpers from destroying the universe. Eventually, this turns into Roland battling the Man in Black across two realities – ours and an alternate, desolate version of Earth – over Jake Chambers (Tom Taylor) a young boy with a great power the Man in Black seeks to exploit.

Newcomers to the mythology will likely wonder, among other things, why the Man in Black needs the kid at all when the villain is overpowered enough to kill with an utterly drama-free whisper. Fans of the books can attest that most of what’s going on at least made some sense when it was allowed to develop naturally over multiple, admittedly chaotic, novels. However, director Nikolaj Arcel and the film’s gaggle of writers have little regard for such context, cherry-picking elements from various points in the series, sparing little thought as to whether their changes make narrative sense.

The lone bright spot in The Dark Tower is Elba, who is perfectly cast as Roland. Elba brings a presence and a gravitas to the role while gamely handling the fish-out-of-water humor that arises when the extradimensional gunslinger tours modern day Ney York. It’s no fault of Elba’s the appeal of the literary Roland is lost to a by-the-numbers revenge story. It’s also not his fault the screenwriters repurposed Jake, a wide-eyed, downer of a preteen, as the main character, dousing the whole mess with an unfortunate YA stink.

The Dark Tower is the worst sort of adaptation, one doomed to wander the space between worlds, equally repelling those who love the source material and those who are unfamiliar with it. For those still holding out hope for a worthy Dark Tower adaptation, maybe there is an Exorcist: The Beginning/Dominion: A Prequel to the Exorcist situation in Elba’s future, one were everything changes about the movie except for him. Hopefully this time one version ends up good.

Underworld: Rise of the Lycans