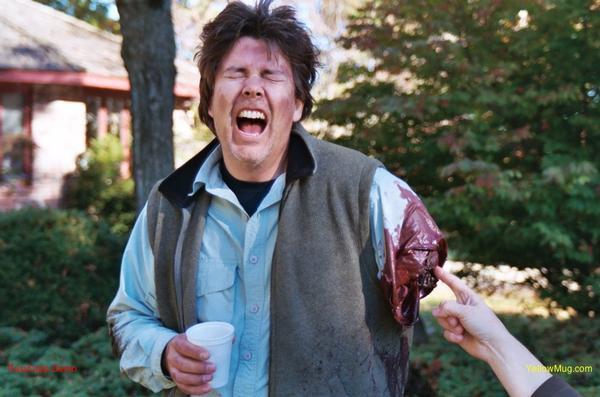 An all girl punk band is on tour. Traveling through the country side to their next gig, they stop for gas at a lonely little diner in the middle of nowhere. Gassed up, they hit the road once again with a new shortcut in mind to try. Once they hit the deep country they noticed they were swindled at the gas station and have run out of gas. What's an all girl punk band to do? Take a bath in the pond of course! Turns out though, there's more than just the band, their manager, and the bass player's jealous boyfriend out in the woods; Coach, the deranged middle aged man with a severe foot fetish happens to inhabit the land they've stalled in. Are the girls and their tootsies safe? Of course not, it's a horror movie!

"Stump The Band" is a common entry into the low budget indie horror genre; a crazy slasher out in the woods. Thankfully though, the dialog and action contained within helps to keep it above the mediocre mark a bit and to make for an unexpectedly fun watch. The characters making up the band are cliché yet fun, as are the manager and the jealous boyfriend. Most of these people haven't done a whole lot else as far as acting goes, but they do a competent job without falling all over themselves.

The biggest positive here is the killer and his two side kicks. For possibly the first time ever we're faced with a deep country crazy that's dressed in... a polo shirt and khakis! It was kind of nice to see a slasher that looks like you and me. Larry Wyatt who plays 'Coach' is a pretty creepy guy and handles the job pretty well. Dressed in an air of normalcy, it was up to him to convey the crazy side of a serial killer, and he does it rather well. The fact that the killer has a sever foot fetish is a nice touch too, if not out of nowhere. Some of the more humorous moments of the film come from Coach's monologue's with his victims feet. When's the last time you've seen a serial killer who likes to talk to women's feet?

Throughout most of the film the kills and gore are done well for a low budget flick. There's some innovative work going on between Coach's lackeys and the band and manages to be a step above other low budget fare. Unfortunately, they manage to throw in some CGI into the final scene of the movie that is so bad...it takes you out of the film entirely. They had done so well up until this point, they surely could have kept up what they had established and thrown together some fake blood and corn syrup to make it at least consistent with the rest of the film.

"Stump the Band" isn't going to rewrite the genre, but it will entertain. With original music by the girls' 'band' sprinkled throughout the flick, you'll get a good laugh at such songs as "These pissflaps keep flapping" and the like. There are some writing issues here such as when Coach takes a solid ten minutes to cut the main girls feet off, delayed because of his love of talking to himself. But for a low budget flick, there's far far worse out there.