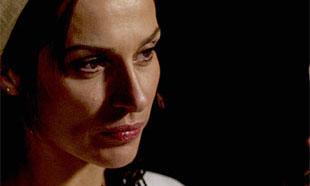 “Six Films to Keep You Awake,” is a collection of horror films by Spanish directors made for Spanish television. Redundant I know, but I find it's hard not to be overcome with jealousy that these films played on Spanish television uncut, while here in the States you have to shop for, or use Netflix to find this kind of material. While I remember hearing a buzz about these films last year when they first came out, I hadn’t gotten a chance to watch all six of them until now (thank you, Bloody Good Horror).

“Spectre” is one of the more traditional titles in the lot, some might even go so far as to say bland. It is a story of paranoia and guilt. Tomás (Jordi Dauder) an older man in mourning, returns to his hometown in Spain after his wife commits suicide. Upon arrival he reflects on his past as a teenager growing up with his friends and his religiously zealous mother. The boys are sitting outside his family's house when one of Tomás' friends begins to describe the new woman in town, Moira (Natalia Millán).

Moira is a braless, unmarried single woman in her thirties who has just moved into a house on the outskirts of town. Because of her seclusion and single status, the town's religious zealots, Tomás' mom in particular, start rumors that Moira is a witch and a whore. One of Tomás' friends decides it would be a good idea to sneak around the house and try to catch a glimpse of Moira. They trek up to the house and try to peek in the windows, but are startled. Tomás trips, hitting his head on a rock. His friends, frightened, leave him there. Moira comes out of her house and takes him in. He awakes in her bed and she wraps his ankle. She is dressed in all white and has a white cat, which is rumored to be the devil himself, who changes in the night to have sex with Moira.

After being in Moira's house, Tomás falls in love with the older Moira, picking fights with anyone who speaks ill of her. Tomás' obsession begins to threaten his relationships with friends and family as they believe Moira has bewitched him. “Spectre” was written and directed for television by Mateo Gil, co-writer of “Abre Los Ojos” (which was later remade into “Vanilla Sky”), and the best foreign film at the 2005 Academy Awards, “The Sea Inside.”

I would have never guessed this was a movie made for television. The production and set design do not feel like they came from a television budget. It doesn't have that made-for-TV gloss to the picture either. Gil really shows his skills as a director by creating a creepy atmosphere in two types of places, both in the city, as the older Tomás is haunted by his memories, and in the Spanish desert where Moira lives, smoothly moving back and forth through different times and spaces. Купить стероиды по самым низким ценам с доставкой по Казахстану

“Spectre” is a typical story of the witch who lives down the street, but the setting and flash forward make it fresh and interesting. It really turns the American standard of the spooky unkempt house on its head, instead having the suspected witch living in a pueblo in the desert with cactus' littering the front yard.

Overall, “Spectre” is a tasty little film. I wasn't blown away, but I also wasn't disappointed. The ending is fairly predictable, but Gil's eb and flow between past and future and the solid storyline keep you awake until the end.

"Spectre" definitely fits into the "slow-burn" Spanish horror category. Instead of over-utilizing the tried and true jump scare, Gil instead uses his visuals to startle in unpredictable ways. I'd recommend this to anyone who liked “The Orphanage,” and even if you don't find the slower supernatural dramas to be your cup of tea, I'd still give it a watch as you might find the 75 minute running time an appropriate pacing for this type of film.