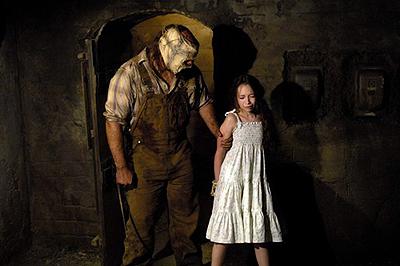 It’s 1979 and there’s a vicious serial killer on the loose named ‘Seed’. Seed has a penchant for locking his victims away in dark cells leaving them to die, videotaping them the entire time. Soon Seed is captured and sent to death row to await his execution. In the meantime, the state pen has some problems with their electric chair; it’s old and faulty and doesn’t do a very good job. This is cause for concern since Seed's execution is coming up and he's quite a hefty guy. Buried after his botched bolt barrage on old Sparky, Seed is back to pay vengeance on all who have interfered with his grisly hobby.

Uwe Boll; we all know him, most of his despise him. There’s little grey area between the camps of Boll’s critics. A champion of piss poor video game adaptations that leave their audiences cringing, the mention of a second Boll release in the same month is horror enough for some. “Seed” however is a change of pace for Boll; this one’s all original. Written and directed by Boll and not influenced by any means by a video game, “Seed” makes for a change of pace, and a change of quality from the mad man of Germany.

“Seed” doesn’t break the formula of supernatural revenge killers. In fact, it’s pretty run of the mill as far as this brand of slashers go. A hulking man rises from the grave, kills people that did him wrong. We’ve seen it so many times over the years; it’s barely scary these days. As a matter of fact, I would have been more shocked and awed if ‘Seed’ had shown up without a mask! Luckily though, he’s got his uniform in order. When a movie is as cliche as this, the highlights are brought out in the kills. While “Seed” fails to blow the viewer away in this area, it still manages to be entertaining.

In “Seed”, Boll actually tries to stretch his wings a bit and gives us some more drawn out death scenes. There are many that are quick and hard to see if you’re not paying attention; however some are filmed in loving detail to make you squirm in your chair a bit. The scene in which the killer tortures an old woman with a hatchet is drawn out for nearly five minutes and is all the better for it.

It shows the killer's love of the kill and his enjoyment of toying with his enemies. Boll actually shows an attempt to develop a character, and dare I say cultivate a killer for a franchise. The problem is that ‘Seed’ comes across as overly generic; most supernatural bad guys have a signature finishing move so to speak. Jason has his machete, Mike Meyers has his butcher knife. Seed has a random assortment of tools and props that fail to give him this signature and something to identify him with in the sea of similar masked mad men.

“Seed” shows admirable growth in Boll’s screenwriting abilities as well, but it also showcases his ability to become overwhelmed with details. We spend the first fifty minutes of the movie fleshing out the back story of Seed. This is well and good, character development is needed and expected. Where the problems arise are in the editing as it all becomes convoluted and jumps perspectives too many times to remain coherent. In this fifty minute time period we jump through four variations of the time line; the investigation of Seed's crimes, his arrest, his time on death row, and his execution. Laid out in this manner, all seems well and good. In actuality, they jump back and forth across the timeline leaving us with a confusing mish-mash of scenes which are interesting in a whole, but they’re hard to follow along with.

When we eventually make it through this error of editing we are taken to the revenge portion of the film which plays out in rote form. Bad guy wakes up, stalks his victims, gets his revenge. In many parts it is not as action packed as you would normally see in a slasher flick. There’s a little more exposition from our heroes than focus on the bad guy. Aside from the earlier described hatchet scene, most of Seed's deeds are handled swiftly and show not a lot of detail. The after effects of these deeds are done well however and make for some decent gore. Just show us more of the foreplay to go with the money shot!

The acting here is run of the mill and neither disappoints nor excites. Michal Pare stars as the detective who broke the case and the focus of Seed’s affections. Will Sanderson, another Boll stalwart having appeared in such classics as “Bloodrayne” and “Alone in the Dark” shows up as our hulking killer. There’s a nice surprise cameo from Stargate SG-1’s Don Davis as well. It’s a small part, but we get to hear some F-bombs so it makes for a good laugh at least.

“Seed” is not going to reinvent the slasher genre. It’s not going to renew everybody’s faith in Boll either. I do feel safe in saying that it’s Boll’s most cohesive movie to date, but as we've discussed, that’s not necessarily saying a lot. The haters will find plenty in this movie to rip apart, be forewarned. If you can keep an open mind, it’s not too bad of a horror flick coming from the man who shat out “House of the Dead”. If nothing else, the DVD comes with a free copy of "Advent Rising" for the PC. Why? No freaking clue!