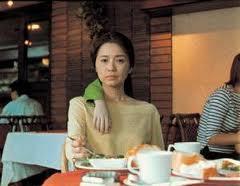 Junco is a Japanese housewife with a gift: she has psychic abilities that allow her to see the ghosts that stick around after tragedies. She wants to put her abilities to a better use than just contacting dead relatives for an hourly rate but she can't seem to find a willing outlet. The scientific world isn't quite ready to commit to studying such strange phenomena and all her attempts to establish herself as a psychic detective come crashing to a halt as she runs into the eternal problem which anyone who has tried to break into a new field has encountered: it's impossible to get hired with no experience. What's worse is that when she tries to work a regular job as a waitress at a diner, her gift proves to be more of a curse. It's not easy to focus on refilling the coffees of salarymen when you're seeing faceless ghosts sitting in the booth right next to them.

Her husband Sato, a sound effects artist at a television studio, tries to be supportive of Junco's futile attempts to capitalize on her abilities. He inadvertently brings an opportunity home with him one day after doing some recording deep in the woods. As he's capturing the sounds of nature, a little girl who has been abducted by a child molester escapes from her captor and runs blindly through the forest. Coming upon one of Sato's empty equipment trunks, she climbs inside to hide. Unaware of the girl's presence, Sato locks the trunk, loads it up and drives it home with him.

Back at the house when Sato finds the unconscious girl inside, Junco sees her opportunity at last. Instead of contacting the authorities and reuniting the girl with her family right away, they'll keep her hidden away long enough for Junco to use her psychic abilities to lead the police to her. A slam dunk triumph in such a high profile case will make her the most renowned psychic in Japan overnight. It seems like a foolproof plan as long as nothing goes wrong. Like, for example, the little girl dying which she is in their custody...

“Seance” has the makings of a top-rate supernatural thriller. It’s directed by Kiyoshi Kurosawa, who was instrumental in the J-horror boom with films like “Cure” and “Pulse” before gaining more mainstream success with the 2008 Cannes award-winner “Tokyo Sonata”. The story comes from Mark McShane’s novel “Séance on a Wet Afternoon” which was previously adapted in a 1968 British production that earned an Academy Award nomination for its lead actress and is considered a minor classic of the supernatural genre. Despite the compelling story and some stylish filmmaking, Kurosawa’s film never quite lives up to its pedigree.

The main problem with “Séance” is that it nails the moody atmosphere but never really delivers the scares, ending up somewhat flat and disappointing. Perhaps in a nod to Sato’s job, the sound design is spot on with unsettling background ambient noise setting the tone for a properly spooky story but when the ghosts show up, it’s the same creepy little ghost girls that seemed to pop up in every other Japanese movie in the early 2000s. Sato and Junco’s descent into evil fares better with its shades of Macbeth, but still never really does justice to the potential of the story.

The film also requires a pretty hefty suspension of disbelief on the part of the audience to work. It seems inconceivable that Sato would have an empty equipment box with him that he wouldn’t bother to put his gear back in when he finished recording and that he also wouldn’t notice had mysteriously gotten much heavier when he went to load it back up. The way the little girl falls into the clutches of the couple is a gaping plothole that doesn’t hold up to any kind of logical examination. It’s a conspicuous bit of narrative laziness in an otherwise carefully constructed film.

“Séance” was a made-for-tv production and it’s possible that most of its faults could be chalked up to that. It certainly feels like it was made quickly with limited resources and could have even been toned-down for a wider audience. If you can look past the overused J-horror tropes (which, to be fair, weren’t quite so overexposed in 2000 when the film was made) and the narrative contrivances that move the story along, there is a unique supernatural tragedy at its core. The disappointment of the film is that with such strong source material and such a talented director, “Séance” should have been much more.