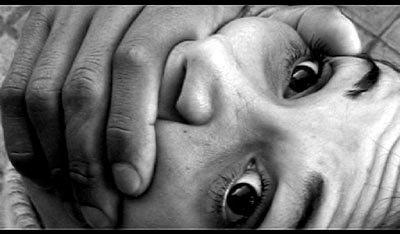 A couple of months back I decided on a whim (not to mention a creeping deadline) to give one of those Redbox DVD machines a try. I was surprised at the fairly decent representation of horror titles, many of which I’d never heard of. I nearly took a bullet for the team and rented “The Devil’s Tomb”, but even the almighty tag-team of Ray Winstone, Ron Perlman and Bill Mosely can’t get me to intentionally watch a Cuba Gooding Jr movie.

Instead, based largely on the novelty value of a prominently placed blurb from some other horror website, I chose a movie I’d never heard of, an Argentinian microbudget flick called “36 Pasos”. I was surprised to find that “36 Pasos” was not only the best zero budget horror movie I’d seen since Daniel Myrick and Eduardo Sanchez headed out into the woods of Maryland, but that it was one of the most exciting horror movies I’d seen in a long time and I couldn’t believe this film wasn’t being buzzed about like some of the other recent horror imports like “Martyrs” or “[REC]”. Director Adrian Garcia Bogliano managed to take the pure sleazy visual joy of 70s eurotrash exploitation and bring it straight into the 21st century.

I was so jazzed by that movie that I checked up on this Bogliano fellow and found out that he’s already got four movies under his belt before reaching his 30th birthday. His latest, “I’ll Never Die Alone” is currently making the festival rounds and the predecessor to “36 Pasos”, “Scream in the Night”, hasn’t been released outside of Argentina yet, but his debut film “Rooms for Tourists” is available on DVD. I tracked down a copy and found a film that solidifies my idea that Bogliano is a director to watch on the horror scene.

The film follows five girls who are all traveling to Trinidad for reasons that aren’t immediately apparent. They all find themselves stuck in a small town when they miss the train they are waiting on. At first the town seems abandoned, but they find the townspeople congregated at church where an exorcism is being performed. The townspeople appear to be very religious but ultimately harmless and when one man offers to rent them rooms in his house for the night they grudgingly accept. The house is big and spooky and the Norman Bates jokes the man makes about his dead mother and his strange brother don’t help and it’s not long after the girls turn in for bed that a masked man who looks like a killer luchadore starts hacking the girls up with a butcher knife.

In many ways, “Rooms for Tourists” feels like a dry run for “36 Pasos”. A lot of the same ground is covered. A large group of hot girls who are prone to taking their tops off before being brutally massacred? Check. A “Texas Chainsaw Massacre”-style family of killers led by a costumed maniac? Check. Balls-to-the-wall crazy editing, camerawork and music cues? Check. The two movies are thematically very similar and it’s easy to see the natural progression between the two which was bound to happen because Bogliano was apparently only 19 years old when he started making “Rooms for Tourists”.

What this movie really gets right is atmosphere. It is shot in black and white in what looks to be low-end digital but except for the occasional cruddy looking scene, it works really well to add a gothic tone to the movie.

The early scenes of the movie in particular where the girls are inspecting the creepy house they’ll be spending the night in bring to mind an old school haunted house vibe with a clear nod to “Psycho”. Once the chopping starts, though, the film is firmly in the modern age with some truly brutal gore and an unrelenting pace. Somewhat unexpectedly for a slasher film, there is a twist which gives the killer a clear motive for murdering the girls and in the process, adds a whole new layer to the film. Not to give too much away but if they ever made an American remake of this film, it would be incredibly relevant and timely in today’s political climate.

Bogliano's strong visual sense begs for comparisons with Dario Argento (he's almost guaranteed to be lumbered with the inevitable nickname of "the Argentinian Argento"). It's a comparison that's well deserved - this guy has done a better job of nailing what Argento did so well back in the 70s than any other director this decade, Dario himself included. The fact that his films work not just atmospherically but also on a storytelling plane make them even more intriguing. “Rooms for Tourists” is very much a rough, early work made for no money by a young director with all the flaws you might expect from such a movie, but in a larger context it someday might be remembered as the debut feature of a major horror talent.

Night of the Demons