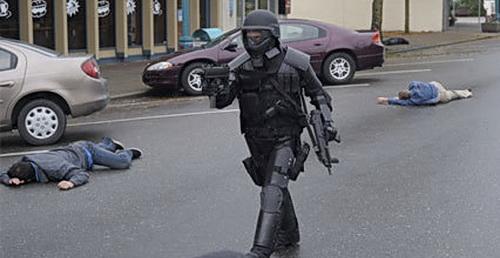 Generally speaking, Uwe Boll and quality cinema do not go hand-in-hand. The infamous German director -- who once challenged several internet film critics to a boxing match -- is probably best known for his wonky adaptation of the video games "House of the Dead" and "Alone in the Dark", two films that provide very little in the way of intentional entertainment. Bad movie aficionados, meanwhile, have lovingly embraced Boll's ineptitude for what it is: cheesy, self-serious malarkey that manages to get by on sheer audacity alone. Nobody expects great things from the likes of Boll, and, truthfully, that's kind of the way we like it. Thank the Gods for the Canadian Film Tax Credit.

The good doctor's latest creation, the strangely effective 2009 action/drama "Rampage", is very different from his previous accomplishments. Instead of relying on an established intellectual property, silly gimmicks, or endless explosions, Boll boldly injects a little intelligence into this raw, uncompromising critique of American culture. There were times when it almost reached the same level of biting social commentary found buried inside Paul Verhoeven's 1987 classic "Robocop". I hesitate to use the term "tour-de-force", but it seems to fit this picture remarkably well.

Brendan Fletcher stars as Bill, a disenfranchised twenty-something who still resides within the cluttered confines of his parents' basement. Mom and Dad aren't too thrilled about their son's inability to leave the nest, especially since their only offspring seems to have absolutely no direction or ambition whatsoever. Bill, meanwhile, is content to spend his days fixing cars, eating greasy fast food chicken with his anarchic best friend, and pumping iron while envisioning the reign of absolute terror he plans to shower upon the unsuspecting residents of his sleepy hometown.

Driven by bitterness, misdirected anger, and an unrelenting desire to wipe incurable stupidity off the face of our overpopulated planet, Bill dons a bulletproof suit of armor, grabs a few automatic weapons, and begins a savage killing spree that ultimately claims the lives of dozens upon dozens of innocent bystanders. What's astonishing about these blood-soaked sequences is that Boll treats the material with surprisingly maturity, which skillfully prevents the film from becoming a sensational, overwrought glamorization of a very serious and deeply unsettling subject matter. To be perfectly honest, I didn't know the man had it in him.

On the downside, there really isn't much of a plot to speak of, though, to be fair, "Rampage" is more of a hyper-violent character piece than a formulaic action extravaganza. Boll's penchant for the dreaded "shaky cam" often makes for a turbulent and frequently hard-to-watch viewing experience; anything beyond the intensity of "Law & Order" tends to work my nerves, especially when there are several events rapidly exploding across the screen at one time. Perhaps the most damning flaw in the entire picture is the ill-conceived epilogue, a completely pointless and unnecessary addition that seems both silly and a little contrived.

Say what you will about Uwe Boll, but "Rampage" is a damn fine movie. It sticks to the ribs in ways most socially-aware action flicks rarely do, and remains lodged somewhere in the back of your brain long after the carnage has come to a halt. Everything about the flick is top-notch, from Brendan Fletcher's outstanding performance to the frequently disturbing set pieces peppered throughout the picture. Boll's direction, as well as his abilities as a writer, are at the top of their game, and it actually makes me rather excited to see what he does next. Trust me -- I'm just as amazed and dumbfounded as you are.