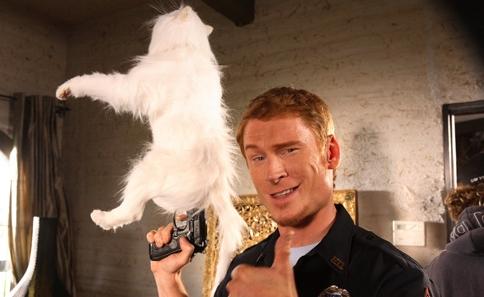 Uwe Boll is notorious for his questionable content and directing vision. There’s no doubt that any of you reading this review are familiar with him and know him by name. With that in mind, when “Postal” was first announced all I could do was utter a groan and a muttered “Oh god why”. As news reports started to flow from the set, especially those of Uwe inviting his critics to the set to participate in a boxing match, the movie just sounded more and more absurd.

Throw in the fact that distribution problems arose due to the slanderous nature of the movie and its message, and I had written this one off totally. Going into “Postal”, I didn’t expect much. I expected a horribly unfunny movie that was nothing but over the top jokes and bad political humor. What I got to see though was a movie that was on par with the normal satire flicks of today such as “Epic Movie” or “Scary Movie”. In the normal sense, this isn’t a good thing. In the sense that this is a Uwe Boll movie that I fully expected to be horrible, it was quite the surprise.

In this modern day and age, the story tie in is simple; make fun of George Bush and Osama Bin Laden and you can riff off of that for a good amount of time. Uwe attempted this here and mildly succeeded. Where I expected nothing but eye rolling bad humor, we are actually shown a bit of Boll’s sense of humor and it works, at least a little bit. My favorite bit being the portrayal of a mild mannered Jewish man putting on an act about his love of Oprah, which is actually pretty laugh worthy since it is so out of character. This combined with the Al Taliban plot to kidnap the uber-rare merchandise of a popular kids show leaves with a zany plot that does illicit some laughs.

Added to this mix of misguided terrorists is Dave Foley as the hippy cult leader Uncle Dave. Working his whole communal religion as a long con for riches and broads, they take a good stab at the culture with some comedic stereotypes thrown in. How they thought to combine this with a terrorist cell is beyond me, but it fits in with the theme of the movie. Foley is both funny and disturbing (I never really thought I’d ever see Dave Foley’s penis, I was wrong) as the leader of D.O.O.M. and segues back and forth between his holier than thou persona and his con man demeanor quite well. Zack Ward stars in this feature as our leading man, “The Postal Dude” and he handles it well also. Long deserving of a shot at a leading role (sorry, I liked the guy in “Titus” and “A Christmas Story”!) it’s sad that his first shot is attached to a Uwe Boll film.

While it may sound that I’m speaking glowingly of “Postal”, it’s not really the case. While I did get some good laughs and the plot flowed more cohesively that most satirical flicks of its ilk, the movie still has its fair share of problems. The jokes are often ham handed and forced leaving you groaning and rolling your eyes. It’s an Uwe Boll film after all! Despite this, I still managed to laugh more at this movie than any other satire. The message of a buffoon running things in the world is quite clear here, but the humor is still at a level you would expect. Ultimately, I still managed to enjoy myself more than I expected. For you die hard “Postal” fans out there, you’re going to find issues with the movie. It’s really only connected by name. Sure, we get some insane violence and shots of Postal Dude mowing down random citizens, but that’s only one scene. There is a crazy gun fight, but nowhere along the way does it tie into any semblance of a story line that may have been contained in the game.

A nice edition to the DVD release is the inclusion of the full PC game of “Postal 2”. If you’ve never played it or feel nostalgic, this is a great pack in for a change! The special features are there but are really nothing overly exciting. The storied boxing matches between Boll and his five critics are featured along with some random spots featuring Vern Troyer.

I can’t necessarily recommend “Postal” for a purchase, but it’s good for a rental for sure. With humor being such a subjective thing as well as political views being polarizing, most watchers will view this as a love/hate situation. Granted, ‘love’ is a bit too strong, but it flows a lot better than a ‘kinda like/hate’ relationship. “Postal” is a good flick for a drunken movie night with your buddies and honestly, it never aspires to be anything more than just that.