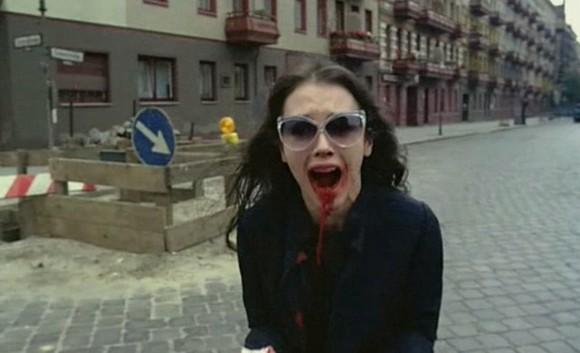 Possession is a hard movie to describe. So much about this movie is purposely ambiguous that I really can’t begin to recount a coherent plot. However, that is perfectly fine, because this movie is more about the experience of the character’s collective descent into complete insanity, than it is about telling a cohesive story.

Sam Neill plays “Mark,” a man who returns from working for some sort of secretive organization to find out that his wife Anna, played by Isabelle Adjani, has been cheating on him with another man. Their relationship goes south immediately and what follows is a downward-spiral of epic proportions.

During the first half of the movie Mark and Anna have wild fights -- one of which ends with them each cutting themselves with an electric knife, another of which ends with Mark beating Anna until she runs into the street, blood spewing from her mouth, where she causes a traffic accident. Mark confronts Anna’s eccentric new lover Heinrich, played by Heinz Bennent, who does his best to be friendly, but ends up beating Mark senseless.

In the second half of the movie things become increasingly more and more bizarre. Anna begins staying in another apartment with some kind of demon/creature. She starts having sex with the creature which I believe, although it is never directly stated, causes her to give birth to two doppelgangers. The first doppelganger is a copy of herself who begins taking care of Mark and Anna’s young son, and possibly has a sexual relationship with Mark.

Mark sends some detectives to find out what Anna is doing and when they get to her apartment Anna kills them and stores their body parts in her refrigerator. I assume they are some kind of sacrifice for the demon, as at one point it wallows in a bed covered in blood, but this is also never explicitly stated.

There is a lot to love about this movie. Each scene conveys either a sense of dark depression or deep anxiety that is palpable, but without being especially uncomfortable to watch. Visually "Possession" impresses. The movie is filmed in West Berlin and the drab, soulless architecture of the city reflect Mark and Anna’s empty marriage. The film’s score is equally impressive as it is filled with subtle flourishes that heighten it’s nightmarish atmosphere. Not to mention, the demon -- although it is only on screen for a few moments it looks absolutely amazing.

The performances are strong and for a large part of the movie delightfully over-the-top. They may also be, at their most exaggerated moments, the only real flaw of the movie. At one point Heinrich talks to Mark while spinning in circles, making wild gestures, and blabbing nonsensically about God. It’s a moment that is so ridiculous, that even in a movie full of crazy moments, it doesn’t quite seem to fit.

Many of the scenes are set in front of the Berlin wall, I suppose the message being that a failing marriage is a lot like a city divided against itself. If there is a much deeper message to this movie, I couldn’t really begin to tell you what it is. The writer/director Andrzej Zuawski claims to have written the script during the midst of a messy divorce so I would guess that many of less clear aspects of this film have personal meaning to him.

Even so, the movie does seem to be thematically a bit jumbled. There is a lot of talk about seeing God at the moment of death, and Anna’s entire obsession with having sex with spiritual beings, on top of the main thrust of the movie being a meditation on divorce. It is dense enough that I don’t think it is possible to tell if each element has a specific purpose or is just stream-of-consciousness craziness. Normally I would consider this a miss-step, but in a movie like this I think it only makes it stronger.

I’ve dug up a lot of older movies in the last year or so, based on listening to podcasts and reading movie reviews etc, and "Possession" has been among the most impressive and most rewarding. I absolutely love weird movies and, as far as I’m concerned, the more bizarre they are the better. What I find the most impressive about this movie specifically is not the extent to which it is strange, but the unbelievable level of insanity it reaches without falling apart. This is the absolute strangest movie I have ever seen that wasn’t a completely incomprehensible mess, which to me is a very real and impressive accomplishment. Underneath all the doppelgangers, demons, wild performances, and bodily fluids, there is a clearly understandable story about the disintegration of a marriage.

Although I did find this movie absolutely amazing, I realize that it hits a real “sweet spot” for me, that it won’t for other people. Crazy movies are my thing, and it's probably fair to anticipate that this movie wouldn’t do anything at all for many viewers. Also I would guess the director probably intended for this film to make the audience a lot more uncomfortable than it does. While I was completely rapt with joy, I would imagine most viewers would be a bit more confused than unsettled.

From what I understand the American dvd release of this movie has over half an hour edited out. I’m not sure if you can find the full version through Netflix, however the entire movie is available on YouTube, so if you are interested in checking "Possession" out, I would just recommend watching it there.