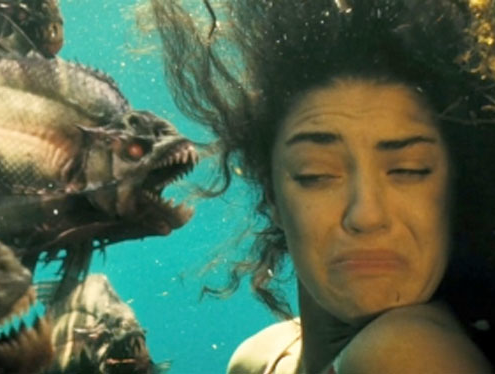 Alexandre Aja, the French cinematic wunderkind, has cut a wide swath through the American horror scene for someone just a few years past his 30th birthday. Bursting onto the scene with "High Tension," then tackling Craven's "The Hills Have Eyes" on his first Hollywood turn, Aja stumbled a bit with the original horror concept "Mirrors." For his fourth feature then, a return to safer (and likely more lucrative) ground with a remake of 1978's "Piranha" -- a film which had already been remade once in the 90s -- likely was an easy decision to make. On its face "Piranha 3-D" doesn't exactly mesh with the work that Aja has done thus far, but thankfully he manages to breathe sufficient life into what one can only imagine to have been among the most absurd scripts ever picked up for production. The director does so by taking an over-the-top concept and aiming for a place beyond the dementedness of even the most puerile teen horror fan's dreams.

The plot -- such as it is -- does not even bear description. It's Spring Break and co-eds descend on Arizona's Lake Victoria just as an earthquake opens up an underwater cavern that has housed prehistoric piranhas for over 2 million years. It's been a while since the little buggers have tasted anything but the meat of other piranhas, so they escape and decide to have a wild Spring Break all their own. Jake, the film's main character -- if "Piranha 3D" can truly be said to have characters -- is the son of the town's sheriff, played by Elisabeth Shue. When Jake is recruited by Jerry O'Connell, doing his best Joe Francis interpretation, to help film the next "Girls Gone Wild" knock-off, Jake and his family find themselves on the lake with a horde o' hungry fish.

To the extent that this can be taken as a complement, the closest cinematic brethren to "Piranha 3D" is very likely a film such as "Tremors" or even the more recent, and infamous "Snakes on a Plane." It asks the audience to take it seriously by not taking it seriously. Quite simply, "Piranha" can only exist in a post-ironic world -- a world where a film about the literal evisceration of hundreds of people, depicted in loving detail, can actually become so grotesque that it moves on into funny. Of course, the humor here is intentional, but that is not to say that the film is funny in any way that resembles a comedy. Sure there are sight gags -- as with the inevitable implants gag when the buxom Crystal, played by pornstar Riley Steele, is devoured -- but the film otherwise leans primarily on its gore to produce laughs.

That it works is a testament to Aja, who may have sensed that with the popularity of films like "Final Destination" and "Planet Terror," audiences were ready to move beyond the earnest, gritty gore of the "Saw" films to a world where several people are sliced in half or chewed to pieces only to produce laughs. Indeed, the presence of Eli Roth, who makes a cameo before summarily being beheaded, should be read as a wink to those critics and fans who have twisted this way and that over the gore issue. "Piranha 3D" feels, if anything, like an argument for a post-gorno world. Combining the zaniness of Syfy with the effects wizardry and glossy budgets of Big Studio Hollywood, Aja pulls us through the lens of a film like "Hostel" to a place perhaps more cynical, yet somehow more tolerable. That most of the actual violence and destruction is obscure in murky underwater shots helps, but even then the first couple of de-limbings shock. By the 15th or even 20th, don't be surprised if you're grinning along with Aja.

At this point, something should probably be said about the second half of this film's title. That is its 3D-ness. Among the dozen or so 3D films I've now seen in the last two years, "Piranha" is easily among the worst offenders of offering virtually nothing in the way of improved theater going experience. Though it has been announced as 3D for some time, it's nearly impossible to imagine that the technology could have been put to worse use. Aside from a handful of toss-it-at-the-audience moments and a couple of guns pointing out into space, 3D did little in "Piranha" other than to distract from the action and create difficult and awkward sight lines during some of the more gruesome death sequences. The shame is that if the film actually succeeds, it will be billed as a success for 3D, when if anything the movie would only be improved with a more traditional format.

"Piranha" may leave its most memorable mark as one of the better summer horror films in recent years. It can be a tough ask of audiences in the middle of August to sit through a more standard or frightening horror offering. "Piranha" never makes that ask, and pours on liberal debauchery and flesh to even out all the extremes in gore. It is also brilliantly paced, which only provides further evidence that Aja knows exactly how things work best in the world of horror. While it's unlikely to be cherished as a horror touchstone, "Piranha 3D" -- and its inevitable sequels -- will hopefully be remembered as brave combinations of B-movie zeal and high-end production value.