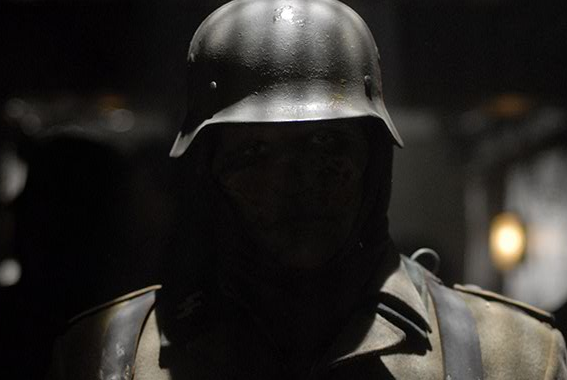 A mysterious business man meets with ex-marine "D.C.", in a seedy bar in war torn Eastern Europe. Promising high pay, the business man hires D.C. to assemble a crack team of mercenaries to escort him to a secret location. Enter the team; put together from a group of ex-soldiers from around the world, they all combine to represent a ham handed stereotype of at least six different nationalities. You have the redneck American, the dark and silent Nigerian, the loud and boisterous Scottsman… you get the idea. Not knowing what they’re looking for or who they’re protecting their new employer from, they head off into the woods to find an old and abandoned bunker. Upon their arrival is when they are finally clued in; the bunker is an old Nazi outpost thought to house a relic of the Nazi super scientists. A device thought to be so powerful, it was possible that it brought the dead back to life!

“Outpost” may lead you to believe that it is a Nazi zombie thriller, but tread lightly on that notion. There are dead Nazi’s, but not necessarily of the brain-gnoshing variety. Our undead this time around are more of the revenge ghost persuasion, but it still works out well. With a decent mix of action and spookiness, “Outpost” makes for a nice change in the overwrought ‘undead’ market. Some good old Nazi-sploitation is always fun too!

Where one would normally expect some in your face jumps and scares, “Outpost” specializes in claustrophobia, atmosphere and creep. Upon their discovery of the ‘scary German dude’ in a pile of long forgotten corpses and his ever vacant and menacing stare, it’s apparent that this flick will go light on the jump scares. I mention atmosphere a lot because it was truly the highlight of the movie; there are long stretches without any ghosts at all as they go through their paces systematically exploring the bunker, leaving you on edge as they round each dark corner.

There are times that the movie begins to run slow, but over all this slow pace helps to build a decent amount of tension throughout, and the underlying plot of this mysterious organization in search of Nazi technology is intriguing and keeps the movie engrossing. The problems lie in that they fail to tie off all the story lines at the end of the movie. We’re shown glimpses of the mysterious scientist ‘phoning home’ that he’s found the relic he was in search of. We’re given snatches of story of what the machine does and what he thinks it capable of. We’re given a huge hint that there is another group incoming to assist them at the bunker, but it is never capitalized on; while we do see the second group, we’re given zero insight to their meaning or origins. This gaping hole could have helped to cap this movie off with a much higher score giving us a highly original plot that was surrounding by good atmosphere. Instead we get a pretty decent movie with some confusion. There was a period in the second act that I had just as little knowledge as to who was shooting at the soldiers as they did, which was none.

The stereotypes of the soldiers making up the team of mercenaries are downright laughable. While all of the men managed to be mostly believable, their portrayals of their national traits were so over the top is was nearly distracting. They still provided a group of rough and tumble guys worthy of an action flick, and that’s just fine by me. Through in a couple of great shots of back-lit Nazi ghosts approaching from a wooded hillside, the movie makes its self memorable in an iconic way as well.

A nice little action/horror hybrid, “Outpost” isn’t going to win any awards, but it will entertain. Nazi ghosts are a caste that haven’t been visited here lately and it makes for a nice change of pace in the world of zombies, deformed hillbillies and vampires. Worth a rental in the Netflix queue indeed.

The Mummy: Tomb of the Dragon Emperor