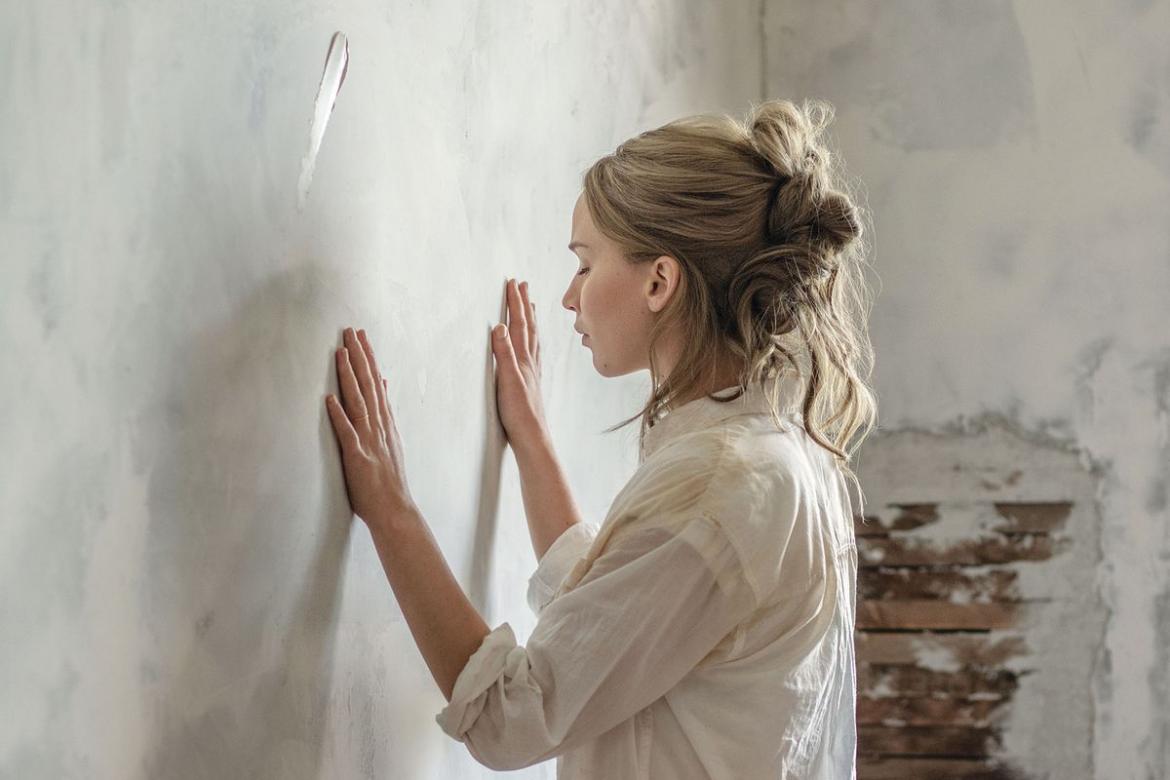 Darren Aronofsky isn’t afraid to take you to hell and back. Nor does he care whether you enjoyed the ride or not.

The already polarized reception mother! has received illuminates the perceived differences between art-house and mainstream audiences. Whereas one side is claimed to revel in philosophical mush, the other prefers explosive and expositive studio slop. Leave it to Aronofsky to embrace polarization and release a film that abides by each of these stereotypes and expertly demonstrates that neither audience is absolute.

Quite fittingly, mother! is both a Rubik's Cube and easily the most narratively linear film Aronofsky has made. When Mother (Jennifer Lawrence) awakens to find her husband, Him (Javier Bardem) missing from their bed, she wanders the halls of their desolate (but paradise-like) country house until Him returns to tell Mother he needed some time alone to work on his poetry. It turns out that Him’s introvert nature is nothing more than a ruse, as the arrival of Man (Ed Harris) and his wife, Woman (Michelle Pfeiffer), ignite Him’s ego. Man and Woman are devout followers of Him’s work; so much so, they’re willing to defy the house rules to gain a closer look at his skills. Mother is disturbed by their intrusion, frequently requesting Him to ask his fans to leave. When they don’t, the peaceful home Mother has built is thrown into chaos.

To say more plot-wise is to spoil the film; possibly the reasoning behind Paramount's wide release strategey instead of rolling it out through specialty markets. mother!, though, is a horrific chamber piece that deserves respect for its bold style and layered complexity.

Pfeiffer is chillingly present as Woman, commanding an outward aloofness that proves more sinister at her core. Aloofness, though, describes just about every character in the film – even Bardem’s Him who bursts with joyous angst and trembles at the thought of his fandom. However, the centerpiece is Lawrence, giving her finest performance to date. From the start, we never leave Mother’s side, and through Matthew Libatique’s cinematography (of Black Swan fame), we are subject to the claustrophobic torture she endures. We swirl and spiral with Mother, and only come to rest when she does, frequently to drink an amber colored powder that soothes her overwhelming anxiety. The closeness at which we witness Mother’s pain connects us to one of the film’s themes: the silencing of women by men. It’s a theme Aronofsky explored in Black Swan and Noah. In mother! he tackles it ruthlessly as she is expected to stay silent as she’s verbally assaulted by Man, or even sexually harassed by a fan of Him. Lawrence is exceedingly skilled at conveying unspoken emotions, but she’s dynamite in the melodramatic dialogue scenes, never letting her command on Mother reach a theatrically overwrought blandness.

No small effort went into Aronofsky’s apocalyptic vision, and the film's final 30 minutes is a testament to this near-perfect roller coaster ride. In a spectacular fever dream of technological precision, Aronofsky achieves what is arguably one of the finest literary adaptations through a mishmash of on-the-nose reference, to dizzying interpretation. Largely due, in part, to the help of set and sound design, the film’s finale is relentless and ugly, but it serves the detail Aronofsky deploys throughout the film. Every shot and set piece is deliberate, and it’s undeniably the most self-aware film Aronofsky has made; one that keenly interrogates what it means to be a creator and a destroyer, but mostly an auteur: a moniker that should not lightly be thrown around with Aronofsky. Some will call it pretentious, but for a writer/director that has spent his filmography deliberately trying to answer some of humankind’s greatest questions it’s refreshing to see Aronofsky this raw and open to criticism.

mother! is no easy feat to sit through and digest. There are a few hangnails that are apparent because so much detail was put into the film’s grandest moments, but on a whole mother! is a masterpiece. It warrants multiple viewings, not so much for its relatively simple plot (it’s fun to see Aronofsky poking fun at detractors who find his films too cerebral), but rather for its thematic explorations. Literary adaptation, genre, gender, and religion are all simmering under the surface in mother!, but like any good artist, Aronofsky only asks questions.