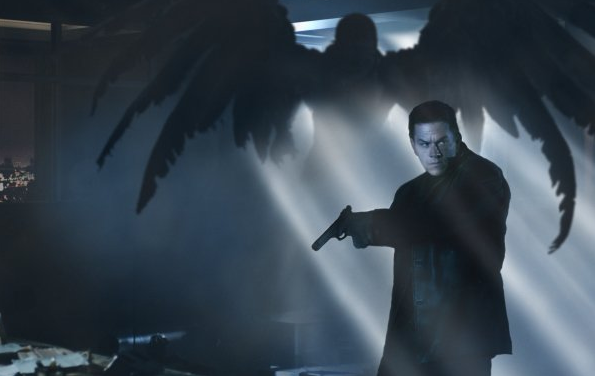 Loosely based on the 2001 video game of the same name, "Max Payne" stars Mark Wahlberg as the hard as nails detective hellbent on solving the mystery of his wife and child's death. Demoted to a glorified file clerk in the cold case department, Max chases any lead he can find in order to locate his wife's killer.

Supported only by BB, his dad's former partner and the closest thing Max has left to family, he fights his way through the city's dark streets and alleys in search of an answer. BB is now the head of security for the Aeris Pharmaceutical Corporation, the former employer of Max's late wife. As Max chases phantoms, brutal murders start to appear about the city; victims chopped to shreds and generally mutilated. Upon meeting the slinky Natasha, junkie and sister to Mona Sax, Max starts to see a pattern of angel winged tattoos in the cities underground that ultimately leads him close to the answer of the vicious murders, and the murder of his family.

Video game to movie translations come and go but seldom do they leave an indelible mark on the minds of their viewers. "Max Payne" is no exception. Promising a highly stylized action romp with the added element of supernatural flair, the movie looks glossy from the outside, but falls far short on the inside. Upon watching the well crafted trailer for the movie one expects to see many gun fights and instances of the game's trademarked bullet time. If you had played the video game, a first person shooter, one would expect the same. Instead the gunfights are minimal and little happens in the action vein. It is apparent that the film makers were shooting for a hard boiled noir feel but you get the sense that they lost sight of what a hard boiled noir entails. Instead of snappy dialog and a gradually unraveling mystery this movie feels more like a badly written drama with guns. The movie suffers from a lack of ending as well. It seemingly ends at least three separate times throughout the third act only to keep chugging away at the least likely moment.

"Max Payne" suffers heavily from pacing issues that make it an emotionless experience involving an hour and forty minutes of Marky Mark looking pensive and channeling his inner Jack Bauer. Instead of the gun shooting Max we grew to love in the video game, we get a Max that doesn't do much at all. Wahlberg as an actor is normally an okay thing, especially in the context of an action movie. Forced to rely too much on emotion and not enough on action star staples, the role falls short.

Perhaps it is a case of the script being at fault for Wahlberg's Max Payne; it was a chore to watch regardless. Beau Bridges role as BB, the enigmatic father figure to the family feels phoned in and a simple paycheck for the veteran actor. There's really not much acting going on for Bridges aside from showing up and talking a lot and that's exactly what it feels like; Beau Bridges standing around talking a lot. Mila Kunis takes another stab at showing range as the deadly Mona and while she looks great in form fitting leather outfits carrying a machine gun, they fail to do absolutely anything with the character.

At one point in the movie Mona utters something to the effect of, "you know what I do for a living. Don't piss me off or you'll end up dead." This a pretty standard villain line in most senses, one we've heard many times before. The problem is, we the viewer have no idea what it is that Mona does for a living! We can assume that it has something to do with arms dealing or assassinating but they do nothing to show us what this past contains. Forced to accept that Mila Kunis is a bad ass is a stretch and serves no other purpose than to sew confusion.

The CGI effects in "Max Payne" are impressive in their prettiness. Shadowy demons and scenes of hellfire enveloping are well crafted and stylized adding a nice flair to this otherwise flat movie. Unfortunately for us, while the trailers promise a supernatural bent to the shadowy protagonists of the film, the true origin of the creatures is a major let down and relatively uneventful, leaving this viewer wondering why he bothered to come in the first place.

"Max Payne" may have had visions of grandeur but in the end it only delivered visions of mediocrity. No one involved feels as if they were excited to be bringing this video game to life; nearly every single person from director to key grip felt as if they were merely collecting a pay check. Mark Wahlberg is a natural fit for the character in the looks department; unfortunately the filmmakers failed take advantage of this fact.