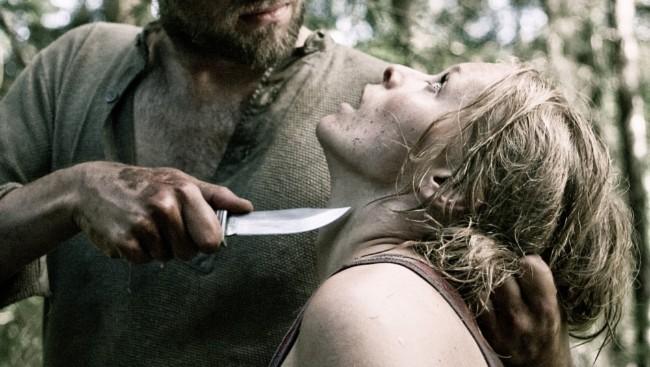 Although I'm not what you'd call an avid supporter of the proverbial slasher film, I can, at least, appreciate what the subgenre has to offer when all of the respective elements are constructed in a manner that doesn't seem contrived, convoluted, or overly calculated. If the film in question takes overly familiar characters, settings, and plot points and skillfully twists them in way that seems fresh and exciting, then I'm more than willing to overlook the borrowed ideas, paper-thin protagonists, and lackluster kills. Otherwise, chances are yours truly is going to spend the majority of picture whining, moaning, and unnecessarily picking it apart like a fat guy at a buffet who suddenly and unexpectedly loses the ability to properly control himself in a public setting. I really wish I were kidding.

Occasionally I'll stumble across a film such as director Patrik Syversen's 2008 backwoods survival horror outing "Rovdyr" (aka "Manhunt") which straddles the ultra fine line between generic rip-off and inspired reimagining. It's a great example of what I like to call patchwork cinema; somehow, against the powers of nature, the filmed entertainment in question actually manages to stagger around on its own two legs by utilizing components from classic, like-minded endeavors in a fashion that doesn't reek of outright theft. The end result, of course, is a cavalcade of mixed emotions and missed opportunities.

Stop me if you've heard this one before: Four individuals on their way to a wild and wooly weekend pay an unscheduled visit to rundown gas station in the middle of absolutely nowhere. They investigate the establishment's less-than-spotless restrooms, get into a verbal altercation with a handful of touchy, dysfunctional rednecks, and hit the road with a strange hitchhiker in tow. As per usual, this slightly annoying gaggle of youth will soon encounter a vicious group of blood-thirsty hunters who would love nothing more than to chase pretty kids around a densely wooded area for roughly 75 minutes before individually dispatching them in a number of unoriginal yet incredibly brutal ways. One survivor may or may not live to tell the tale, though this particular rule isn't necessarily set in stone.

As an exercise in lazy writing, we'll call "Rovdyr" the Norwegian "Deliverance." Or should we label it the Norwegian "Wrong Turn?" Either way you slice it, chances are you'll experience some seriously dizzying deja vu over the course of the picture. It’s a paint-by-numbers production; you know where, when, and how everything is going to happen. What's worse, there's really no plot to speak of -- just lots of running, dodging, diving, screaming, fighting, cursing, and stabbing, nothing more. Were it not for the decent production values and a few surprises towards the tail end of the feature, Syversen’s conventional endeavor could easily be confused with whatever direct-to-video atrocity is coming out next week. And no, that’s not a compliment.

The film’s saving grace, of course, is its liberal allowance of wicked torture and gore, of which there is more than enough to satisfy any unhealthy urges. Unfortunately, these admittedly uncomfortable scenes of realistic violence are ultimately ruined by our inability to care about a group of irritating tossers who spend more time griping and complaining than anything else. I’ll be the first to admit that watching annoying people die can be good fun when the tone is right. “Rovdyr” stark visuals and unflinching cruelty, on the other hand, almost begs for well-rounded characterization and emotional investment. The emptiness is noticeable, especially once the blood starts to flow.

I suppose a person’s own enjoyment of Syversen’s polarizing slasher depends on what, exactly, they’re in the market for. The film mimics its forefathers very well, right down to its plotless presentation and the knife-ready fodder we’re forced to spend the majority of the picture with. If that breed of horror is your thing, “Rovdyr” certainly delivers. Meanwhile, those of us looking for a hint of depth and a bit more substance may find ourselves writing mental grocery lists as our eyes joylessly consume the on-screen atrocities. The vehicle is certainly attractive, but the engine is nowhere in sight.