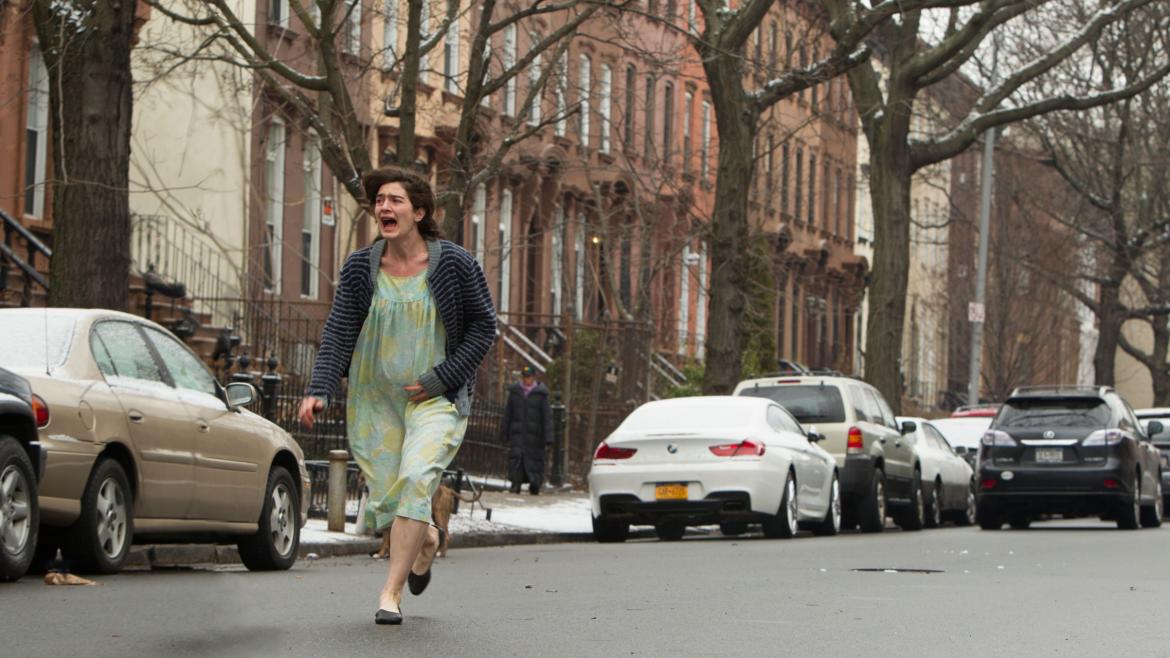 The pivotal moment early in Lyle--a child’s death--is seen over a Skype call. Importantly, neither participant is paying close attention to the girl, but more than that, we in the audience are. In a film that very deliberately and heavily borrows from Rosemary’s Baby, this is a swift and pointed dismissal of ambiguity. It happened, it was recorded, and the is-she or isn’t-she “crazy pregnant mother” didn’t even see it. Lyle may feel on its surface like too much of a do-over with not enough divergence from its predecessors, but director Stewart Thorndike’s psychological stage-setting is shrewd.

Leah and June (Gaby Hoffman and Ingrid Jungermann) have a lot to be happy about. In the film’s opening scene they move to Brooklyn with their daughter Lyle, find their dream apartment, and reveal that another child is already on its way. The cause for the move is June’s budding career at a record label, though exactly how successful she really is, and why, is a string that’s plucked early and often as the pregnant Leah grows increasingly isolated and overwhelmed.

While they’re still in the process of moving in, Lyle dies in an accident at home with Leah. It’s a preventable tragedy, but also a confounding and understandable one, and Thorndike and Hoffman plumb every advantage from these layers of Leah’s grief. No one blames her as much as she blames herself (June supportively heaps all responsibility at her own feet in a therapy session), but this soon turns outward as Leah begins investigating the oddities that have slowly accumulated around her family ever since they moved in: a creepy, baby-obsessed neighbor (Rebecca Street), a mysterious group of models who live the floor above Leah and June, their new building's secret history of children's deaths, even June's own evasiveness about her work and friendships.

With the exception of the soundtrack (all jangly bass notes and theremin whines) and some harrowing closeups of Hoffman’s anguished face, Lyle eschews the shortcuts that are foundational to so many other horror films. There are no jump scares, no surprising dangers seen suddenly in a mirror, or behind an open door, and most noticeably, there’s very little darkness. The effect is to get your guard down, to believe completely in the world’s reality as though it were any other drama, and it works: for the first several scenes you may not be sure how you feel about this indie horror web series turned 65 minute feature, but you sure will slip right in line beside Leah, making the same assumptions she does. It’s such an effective technique that you can’t question her perceptions of things without being forced to reconsider your own.

Polanski’s Rosemary’s Baby has been knocked for spoiling the fun with its unambiguous ending, and this is where Lyle is most distinct from that film. At just the right time, Thorndike pulls back the curtain to show us something shockingly certain, but it satisfies--psychologically, dramatically, and symbolically. Lyle gets under your skin because Thorndike understands what’s lost when horror movies put us at odds with a protagonist, and instead puts us in her place.