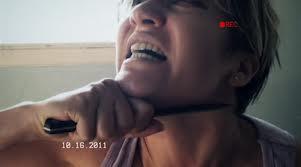 “Lovely Molly” is the latest movie from director Eduardo Sanchez of “The Blair Witch Project” and, like that film, relies heavily on found footage. With the fact that Sanchez co-directed "The Blair Witch Project" in mind, I felt another found-footage film was something of an odd choice. I would think having one’s name so closely associated with the movie that sparked an avalanche of found-footage horror movies, one might want to step away from that style. I can respect the fact that this may be Sanchez’s best option for getting to make more movies, however at this point, over a decade after “The Blair Witch Project,” it seems a little trite to ride the trend that you helped to start.

When I first saw “The Blair Witch Project” it was probably the scariest movie I’d ever seen, but at this point I’m so sick of found-footage that I really don’t care if I ever see another movie like it. I would love to write found-footage off as just another gimmick, but regardless of how burned out on it I am, found-footage will probably always be effective in horror movies because it removes one more layer between the audience and the movie. However, the fact that film-makers don't need to put near as much care into how the movie looks, and that it can be done on a tiny budget is probably the reason that there are a mountain of movies like these.

All that being said, “Lovely Molly” is a movie that starts out strong, and has some genuine potential, but unfortunately fizzles in the second half. The story follows a newly married couple, Molly and Tim, who move into the house of Molly’s deceased parents, despite the fact that there has been some type of negative history in the house.

They soon start to hear things going bump in the night and Molly becomes increasingly stressed because she is forced to stay in the house while her husband Tim is away most of the time working as a truck-driver. Molly is determined to prove there is someone in the house with her, by video recording every time she thinks she hears something, which is where the found footage aspect comes in. Thankfully “Lovely Molly” isn’t entirely found-footage, which is one of the strengths of the movie. Sanchez basically only uses it to build up tension and to set up scares, which is the only time the found footage is actually effective anyway. However, when a movie like this is only partially found footage it does make it seem more ridiculous that the events in question are even being filmed at all. At one point Molly’s husband finds her terrified and hidden in the closet, clutching her camcorder and filming away the whole while, which is a moment that is more than ridiculous enough to ruin the tension of the scene.

Molly’s mental state continues to degrade and her friends and co-workers start to take notice which where the movie really starts to get strange. Her boss pulls her aside to show video to Molly of her being raped on the stores video surveillance, but there is no one seen on camera doing the raping. This is a moment I thought was really creepy and genuinely inventive, but after this scene the movie takes a series of hard left turns that I felt ultimately soured the movie.

At one point Molly ties the carcass of a deer to the ceiling in her basement, and her sister finds her stabbing it repeatedly while she screams and blood pours all over her. Up to this point I felt the actress playing Molly, Gretchen Lodge, had been giving a really strong performance, but this moment is a little too ridiculous for even her to pull off. What follows the deer stabbing are a series of groan-worthy plot twists that I found completely unsatisfactory. Usually a movie like this has one twist, “Lovely Molly” has about three or four of them. However, this type of “the more the merrier” approach to twist endings doesn’t make up for the fact that there was never much of a story to build on to begin with.

The special features on the dvd include four or five documentary-style chapters about Molly’s relationship with her abusive father and the history of the house. I only watched for a few minutes but these just seemed all the plot behind the story that didn’t actually make the final cut of the movie. It appears when found footage movies are made there is a ton of filming, and the movie is edited way down, which may be effective when it comes to things like pacing and crafting scares, but seems like a really sloppy way to tell a story. Ultimately I understand you have to choose what is most important, and for most horror fans tension and scares are the main priorities, but I feel like for a really good movie you generally still need a good story.

The first half of this movie is actually pretty scary, and the second half seems like a total train-wreck, which makes it fairly obvious that from a director’s standpoint, it must be a lot easier to craft a scary scene where the danger isn’t on camera and something might happen to the protagonist at any moment, then it is to follow through with that tension when something actually is happening.