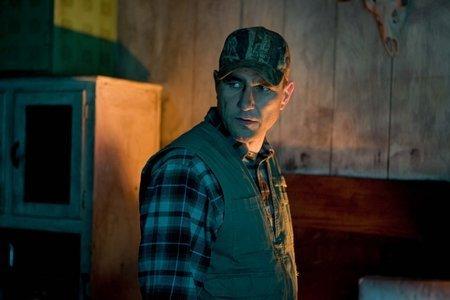 Legend of the Bog (Movie Review)

As a general rule, I tend to shy away from most cheap, slipshod, Sci-Fi Channel-esque monster movies featuring ugly, poorly-executed mutant creatures and a plethora of washed-up film and/or television actors looking for a quick way to pay the rent this month. It's not that I have anything against rampant cheesiness or those in search of a way to make ends meet, mind you, but my tolerance for calculated, intentional cinematic campiness is surprisingly low. Once upon a time this wasn't the case, but as my tastes have shifted over the years, I find this sort of empty-headed endeavor to be mind-numbingly monotonous.

In fact, the only reason I bothered to watch Brendan Foley’s woefully generic 2009 offering “Legend of the Bog” was to see professional athlete-turned-motion picture star Vinnie Jones lock horns with a monster from the titular location for roughly 90 minutes -- nothing more, nothing less. What I got, much to my oozing dismay, was a plodding, podunk horror film devoid of scares, action, and a creature worthy of my wavering attention. I've never seen a movie fumble the proverbial ball in so many profoundly different ways, especially when the core concept is so ripe with potential.

The story -- a tepid yarn about a group of strangers who are forced to confront a hulking brute hell-bent on vengeance deep within an Irish bog -- is fairly typical and wholly forgettable, languishing helplessly in that questionable universe situated between Stephen Sommers’ glossy remake of “The Mummy” and all of those microbudget "lost in the wilderness" hack jobs currently cluttering video store shelves at this very instant. With the right script, these inherently creepy corpses could be the tarry centerpiece of a really effective horror flick. Unfortunately, it would appear that writer/director Foley hasn't seen a classy genre film in a very, very long time. That’s my estimation, anyway.

In the traditional sense of the term, “Legend of the Bog” completely misses the mark as a full-on, balls-out monster movie. Instead of giving us a drippy, disgusting, visually putrid creature to stare at, we’re given a bald, grunting, lumbering hillbilly who seems to enjoy wandering randomly from one goofy set piece to another for a large portion of the film. To say this approach fails on every conceivable level would be an understatement of thuggish proportions. Truthfully, I’m not really sure what, exactly, Foley was aiming for. Given the tragic history of most bog bodies, was the film’s mean mistreater supposed to be sympathetic to the legend? Was I supposed to shed a tear or two as he mindlessly made his way through our confusing modern world? Since these moments are generally associated with some sort of graphic violence, I’m honestly not sure.

Scripting and directing issues aside, the cast is a very big problem. Nora-Jane Noone, a fine actress who is capable of great things (see "The Descent" or "The Magdalene Sisters" for proof), appears both confused and scared out of her gourd; she dryly spouts lines like a children's theater rookie on opening night, and often seems completely uninvolved in the otherworldly shenanigans which are unfolding all around her. Vinnie Jones, meanwhile, trudges through the material without much effort whatsoever. His character is just another variation of those he's played in other movies, though this one tends to scowl a bit less. I won't waste time with the others.

To be fair, I suppose there people lurking within the depths of this great big world who absolutely adore films like "Legend of the Bog," and more power to them. There was a time when I'd eat this sort of soggy, low-calorie bowel movement for breakfast, then, possibly, have leftovers for lunch and dinner. Since my free time has become increasingly precious, I can't, in good faith, recommend it to those who want solid, original entertainment. As a gesture of good faith towards both Vinnie Jones and Brendan Foley, I'd like to say that the director's debut feature, the 2007 thriller "The Riddle," is quality work. My advice: Investigate that title, instead.