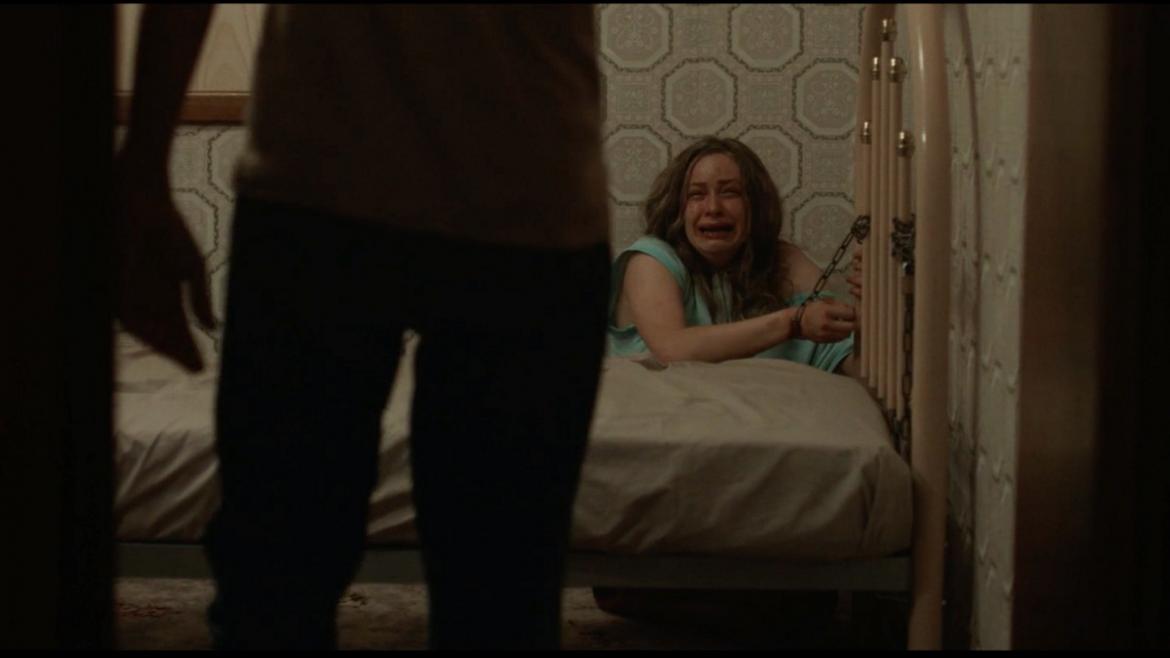 Set in the 1980s Perth suburbs, Ben Young’s Hounds of Love centers on a sadistic husband and wife duo, John and Evelyn White (Stephen Curry and Emma Booth), who kidnap, torture, and murder young high school girls. Vicki (Ashleigh Cummings) is the White’s latest quarry. Drugged and restrained to a bed she desperately searches for an escape while her separated parents search for her.

If that cheery lede is nearly enough to send you packing, know that Young’s film has much more up its sleeve than the blunt force of the plot. The setup, down to the era, is a riff on the true crime case of Paul Bernardo who, with his wife, committed the “Schoolgirl Killer” murders in and around Toronto and Scarborough, Canada. Bernardo also serially raped women in the late 1980s through the early 1990s, an insinuation applicable to John in the film. In the hands of a lesser filmmaker the harrowing setup and ticking clock propulsion would be adequate. Lurid brutality is certainly on display here but Young carefully crafts a film that foregrounds character relationships ahead of the viscerally unsettling material.

From the opening moments of Hounds of Love we know to be in the hands of a confident, thoughtful voice. The camera drifts across a sports field as a group of girls play volleyball. Depicted in slow motion, the camera cuts to close-ups of their muscles flexing as sweat beads on their bodies and a brooding score from Dan Luscombe fills the soundtrack. We then cut to Evelyn and John who sit in their car watching. It’s an instance that both recalls DePalma’s Carrie in its form but also puts us into the objectifying psychologies of the couple. We’re both implicated and detached. It’s a foundational sequence that signals not just technical prowess but a careful attention to mood, tone, and theme.

Young, who cut his teeth on a number of television series, depicts a sweltering environment that revels in these contrasts. Set during Christmas, the film highlights the discordant notion of being carefree on holiday and the setting’s southern hemisphere climate. Much like Killing Ground from this year, the holiday’s northern origins and iconography exist in stark contrast to the tropical, seaside landscape engendering a foundational unease that permeates the atmosphere.

These contrasts come to a forefront in John and Evelyn’s grotesque domestic routine. Rather than leave these two people as one-note psychopaths, Young reveals a codependency that has become increasingly twisted by John’s emotional and physical abuse of Evelyn who has a deep past with which she has not reconciled. Vicki begins to wedge herself between the couple, calling Evelyn to suspect John’s true motivations. By foiling this dynamic in Vicki’s separated parents, who have their own resentments, the film becomes an exploration of the fallout from fractured relationships within traditional domestic frameworks.

Hounds of Love may offer some of the genre’s grimmest subject matter but it’s Young’s ability to craft a unique tone while populating the film with characters we can empathize with that keep it from being a shock-filled slog. By the time the finale offers a sort of reconciliation, the resulting catharsis rings true for both victim and perpetrator.