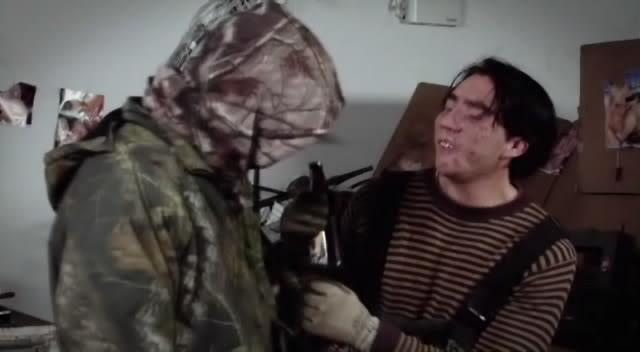 In a genre whose fans pride themselves on being able to stomach whatever is thrown their way, horror directors continue to push buttons in an attempt to leave a lasting impression. Many amateur filmmakers often choose to keep their finger on the shock button rather than craft an experience that truly sticks. Despite offering up the semi-memorable "Gutterballs" in 2008, director Ryan Nicholson falls headlong into the abyss of forced depravity with 2009's "Hanger."

"Hanger" begins in particularly stark fashion with Rose (Debbie Rochon) being attacked by her pimp Leroy while her friends "Trixie the Mangled Whore" and "Melivina the Tranny" (played lovingly by Troma's Lloyd Kaufman in drag) watch on. Leroy is intent on terminating Rose's pregnancy by any means necessary so she can get back to work for him. In this case, "by any means necessary" means a very, very graphic abortion scene that leads to Rose's death. If you've already taken note of the film's title, I don't think I need to explain any further. Fast-forward 18 years, and the baby that survived the previous scene's proceedings has grown into a scarred, grotesque adult that lives with a homeless man. After being ousted by his friend, the monstrosity that comes to be known as 'Hanger' is picked up by his true father, a trucker named "The John," who gives Hanger a place to live and a job at a local garbage plant.

At the plant, Hanger makes friends with fellow outcast Russel, the most outrageous Asian stereotype in recent memory, who also has a thing for a female coworker's 'special time of the month.' The conversations that take place between these fast friends are usually about beer, porn, or any number of sexual perversions, and are so consistently foul that they become white noise at a certain point and fail to shock in any lasting way. In one of their late night porn-watching sessions, Hanger sees his mother on the TV screen and vows to avenge her death despite her checkered past. "Hanger"s tagline ("Payback is a bitch of a whore," cute) would lead you to believe that this is an over the top film about violent revenge, and that Hanger would leave unending chaos in his wake as the viewer delights in buckets of glorious gore. Unfortunately, aside from the random mauling of a hooker and a Jahova's Witness, there is little violent revenge to be had.

Instead, the unfortunate viewer is treated to over an hour of such titillating scenes as Russel making tea with a certain stringed feminine product, Hanger's boss pleasuring herself with an oversized pen as co-workers listen over the PA system, and a hooker farting in The John's face after he is captured and tortured by Leroy, among other various unmentionables. There are a few genuinely funny moments sprinkled throughout, but it's a major challenge to remain paying attention for long enough to catch them. Viewers expecting a reward for their perseverance are also guaranteed to be disappointed when Hanger gets his "payback" in the end, which is no more over-the-top than the conclusion of any given Lifetime network thriller.

If Nicholson focused a bit more on the story and turned off his inner 14 year old for a few minutes, he could have crafted a fun little exploitation flick. Instead, "Hanger" just left me with a bad taste in my mouth, and not just because I made the regrettable decision of drinking during the tea scene. Unless pride yourself on suffering through any film no matter how difficult, or pride yourself on being an abortion joke enthusiast, I would skip the one entirely.