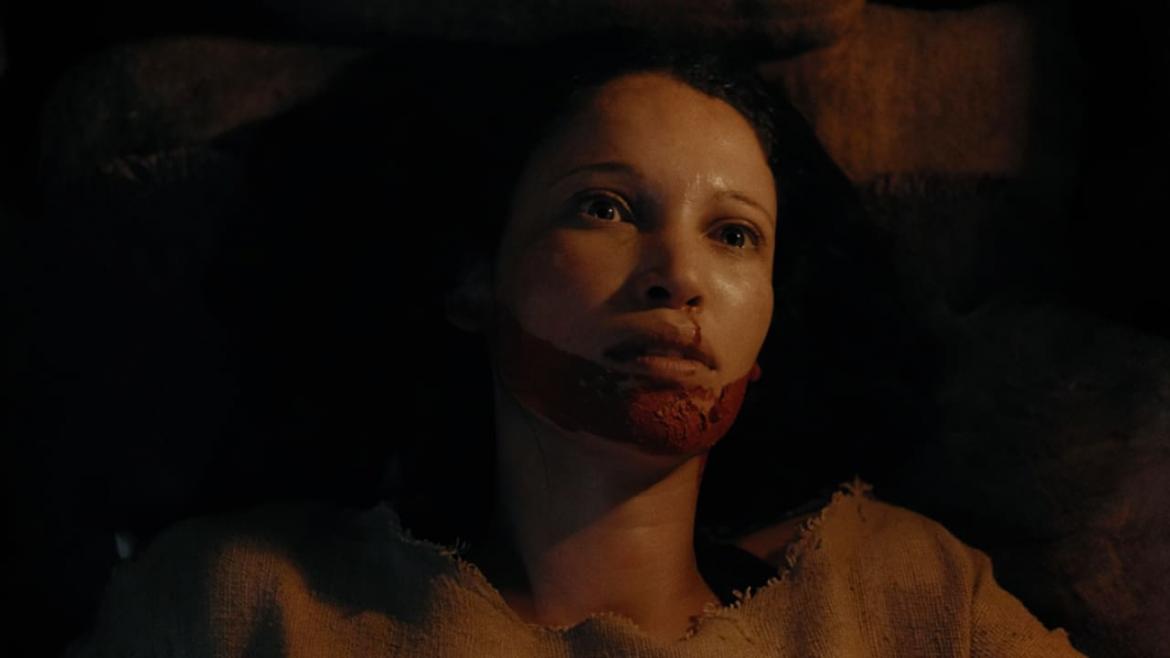 As we live in a world increasingly wracked with skewed climates, unprecedented weather patterns, and deadly viruses burning through the population, it’s not hard to imagine that this is all a product of the planet’s immune system finally fighting back against its most destructive parasite--humanity. This idea is considered--and not entirely dismissed--in the South African eco-body-horror fungal fever dream Gaia.

The film opens with two park rangers canoeing into the primordial wilds of the South African brush to do some routine maintenance on their equipment. One of the rangers, Gabi (Monique Rockman), treks off on her own to recover a crashed drone and is maimed by an animal trap set by a pair of father and son survivalists who live a primitive existence far from the modern world. As Gabi recuperates in their shack and attempts to contact her partner for rescue, she learns that the father, Barend (Carel Nel), is a former scientist who has turned his back on civilization after discovering that beneath the jungle canopy lives the largest living organism on the planet, an immense, possibly god-like, fungal life form which he tends to and communes with as a god while he writes a Unibomber-esque manifesto about the imminent extinction of mankind. Meanwhile, as her fellow park ranger searches for her, he encounters the strange flora and/or fauna that live among the spores that float throughout the forest.

The two inescapable cultural touchstones that Gaia brings to mind are Alex Garland's Annihilation and the PlayStation game series, The Last of Us. In fact, the blind, clicking, mushroom-headed monsters stalking the jungle are so reminiscent of the creature designs from Naughty Dog’s game that it feels like the movie exists in the grey area between a cease and desist order and being an unauthorized prequel. Also like the game, the creatures are only secondary antagonists that end up being a much smaller-than-expected part of the film as it becomes clear that the far greater danger to the characters comes from their fellow humans.

In line with Gaia’s shroom-centric concerns, the visuals are simultaneously surreal and hyper-realistic. The film bursts with earth tones as it dances between the micro and macro with close-ups of human skin, plants, and fungi that begin to not look so different from the wide shots of acres of jungle foliage. As things dive headlong into psychedelia in the third act, director Jaco Bouwer even starts playing with aspect ratios to make it even harder to hold on to an objective reality. The story resolves with several unanswered questions and un-pulled-upon plot threads which render the whole affair somewhat inaccessible and perhaps not completely satisfying, but the eukaryotic body horror plus the existential dread of the central environmental allegory add up to a film that truly breaks the mold.