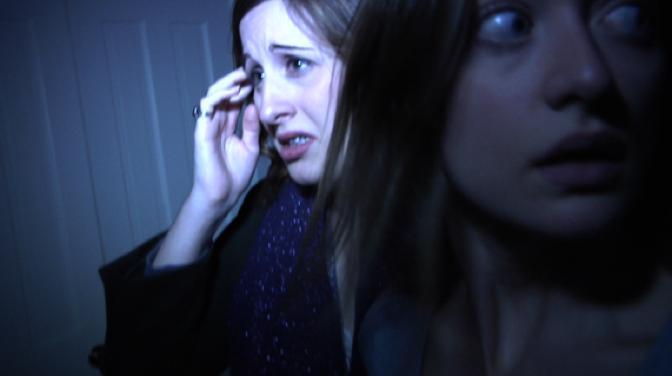 Previous to receiving the screener for Dominic Perez's 2009 "lost footage" thriller "Evil Things," I hadn't heard anything about the film whatsoever. Regardless, my curiosity was immediately piqued, as the disc containing the preview copy of the movie was fashioned to resemble a highly classified video rescued from the depths of an FBI evidence room, complete with criminal lab identification numbers and an official-looking stamp which proclaims this movie to be "confidential." While initially intriguing, a little voice in the back of mind kept repeating the same phrase over and over again, subconsciously preparing me for the experience I was about to have.

That phrase, unfortunately, was "The Blair Witch Project."

"Evil Things," while interesting and, at times, downright frightening, resembles the iconic horror movie in more ways than one. Over the course of the feature, you're presented with an inexcusable amount of camera shakiness, a collection of whiners in their early-to-mid twenties having extended conversations about absolutely nothing, and an extended sequence which finds the entire cast wandering aimlessly in the woods. In fact, the similarities are so numerous that most jaded viewers may have a hard time seeing the forest for the trees. No pun was consciously intended.

The first twenty minutes are truly captivating: A group of mildly obnoxious New Yorkers, including a goofball who intends to painstakingly film every last detail of their journey, decide to spend a few festive days at a cozy little house nestled in the snowy region of absolutely nowhere. However, their joyous adventure is soon met with impending peril when a mysterious van piloted by a faceless driver takes an unhealthy interest in them, resulting in a particularly tense encounter at a roadside diner parking lot. Instead of agitating their stalker to the point of physical violence, the creep simply drives away, allowing our heroes to continue on their merry way. It's around this point that things begin to take a turn for the worse.

After arriving at Aunt Gail's house, everyone reluctantly joins the alpha male for a leisurely stroll in the woods. The cold, snowy woods. The confusing, nondescript woods. Naturally, they become completely and hopelessly lost, resulting in a tidal wave of childish bickering and teary-eyed complaining. As these ill-prepared city slickers attempt to find their way back to the warmth of their borrowed home, they encounter an array of strange, unexplained noises, lots of trees and shrubbery, and, of course, deer piss. All of this nonsense ultimately amounts to absolutely nothing; the group somehow manages to find their way out of this distracting ordeal safe and sound.

You may think that I have spoiled the entire movie in just a few short sentences, but you'd be absolutely wrong in your assumption. That's because "Evil Things" doesn't really find its footing until the last fifteen minutes, which are, much to my pleasant surprise, extremely effective and downright scary. Problem is, you'll have to wade through over an hour of missed opportunities and lame conversations to get to the good stuff. Had the characters been given a bit more depth, perhaps the audience would found their inane banter to be somewhat endearing. As it stands, most of the interactions are as fun as reading a Twitter page belonging to a compulsive bore.

And while the finale does manage to raise a few hairs on the back of your neck, chances are you won't be able to shake the feeling that you're watching yet another "Blair Witch" knock-off perpetrated by an indie director with a fair amount of promise. Truth be told, the home invasion sequence in "Evil Things" is far more terrifying and atmospheric than anything in Daniel Myrick and Eduardo Sanchez's genre classic, which, I think, is a testament to Perez's directorial abilities as well as the talent of his cast. Sadly, sticking around to see the final act requires the sort of patience most individuals simply do not possess.

As a director, Dominic Perez is certainly off to a good start. "Evil Things" isn't necessarily a bad film -- it just bares an unfortunate resemblance to a movie most people are painfully familiar with. What's more, its hard to champion a motion picture that has seemingly borrowed all of its positive elements from a similar, more competent production. With the excision of ten minutes, the restructuring of a few key scenes, and the removal of the final sequence in New York City, "Evil Things" would, in my humble opinion, be a much stronger film. If you're going to mimic a movie that literally paved the highway you're traveling on, at least try your best to make it as strong as humanly possible. Even if it's considered a knock-off, at least it's a solid, well-directed knock-off that can stand on its own two feet.