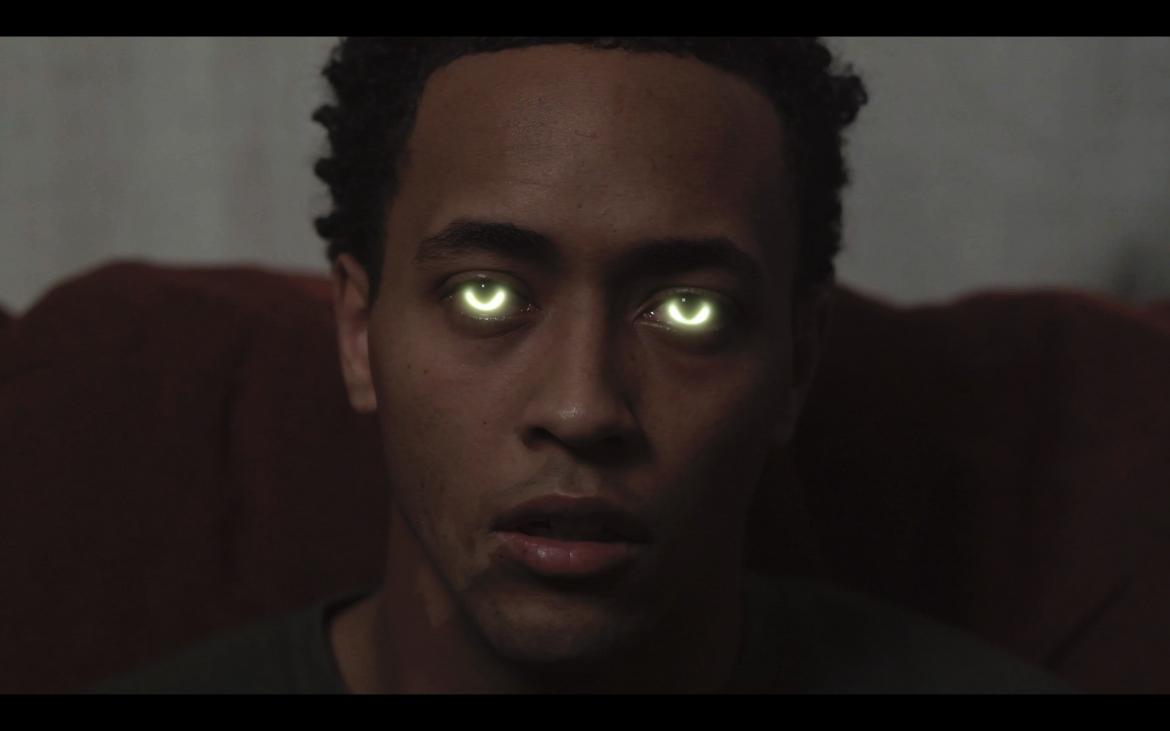 For decades Brooklyn has been the major cultural touchstone for the impacts of gentrification at the presumed hands of white hipsters or the inequities of property ownership. The New York borough has come to signal a short hand for the homogenizing forces of trends flush with capital. In filmmaker Josh Atkinson’s Displaced, the writer/director takes a look at this process of gentrification through a horror lens.

Nathan (Phillip Jayoni) is a social worker currently attempting to find a crack in the walls of a young boy who has suffered a past trauma. Nathan lives in a brownstone with his grandmother Loretta (Hope Harley) and we learn they are one of the few black families who still own property in their community. It is Loretta’s intention to pass the property on to Nathan. While Nathan may have a strong social connection to his clients, he can’t muster the same abilities with his neighbor Jasmine (Shaquanna Williams) whom he has an increasingly unhealthy infatuation with, provoking him to put hidden cameras in her apartment. After one of the tenants moves out, a young white couple from the Midwest move into the vacant unit. Lucas (Atkinson) and Heather (Megan Fitzgerald) seem nice enough -- they won’t “last long here”, says Loretta -- but they also remind Nathan of his own past trauma. Is the couple just too wholesome for their own good or is Nathan’s life and birthright at risk?

Displaced is an ambitious feature debut for Atkinson. The film does not shy away from its subtext and as a result has several poignant sequences especially between Jayoni and Harley. The actors have a very lived-in, natural relationship that feels completely earned and their chemistry results in some tender and funny moments. The temptation to dive headlong into the weighty subject matter is kept mostly at bay in these early sequences. Loretta knows their ownership of the brownstone is essential to building intergenerational wealth in the face of a community that’s about to push them out. As Nathan makes his way in the world we watch as he is viewed as a sexual object and as an immediate threat. He knows no place where he is able to be himself other than their family home, a retreat to inside himself that feels necessary to Nathan though it also allows him to indulge in his darker fantasies.

There is a rather unfortunate shift in tone as the film progresses and Lucas and Heather become more integral to the plot. Much of the humor leading up to the film’s second act is based in character histories and their charisma. However, the film makes a substantial redirect in its humor style and how it handles the new tenants. Suddenly most of the scenes involving the couple come off as whacky sketch rehearsals that feel like complete non sequiturs to the action at hand. When the film attempts to course correct, refocusing on the horror and supernatural elements, it suddenly becomes too earnest. Exposition is dolled out in extended medium shots or close-ups against bland backgrounds as the actors are made to detail complicated mythologies about a cult and a reincarnated anti-christ. It is in these competing impulses where the film’s seams become most apparent.

In spite of film’s limited resources a great many of its sequences work, thanks in large part to the performers involved. Displaced has its heart in the right place and you get the sense those behind it are attempting to make a socially conscious piece of satire. Indeed, its final scene earns back much of the pathos it had in earlier scenes. Unfortunately many of the tools at the filmmakers’ disposal are not up to the task that has been set up.