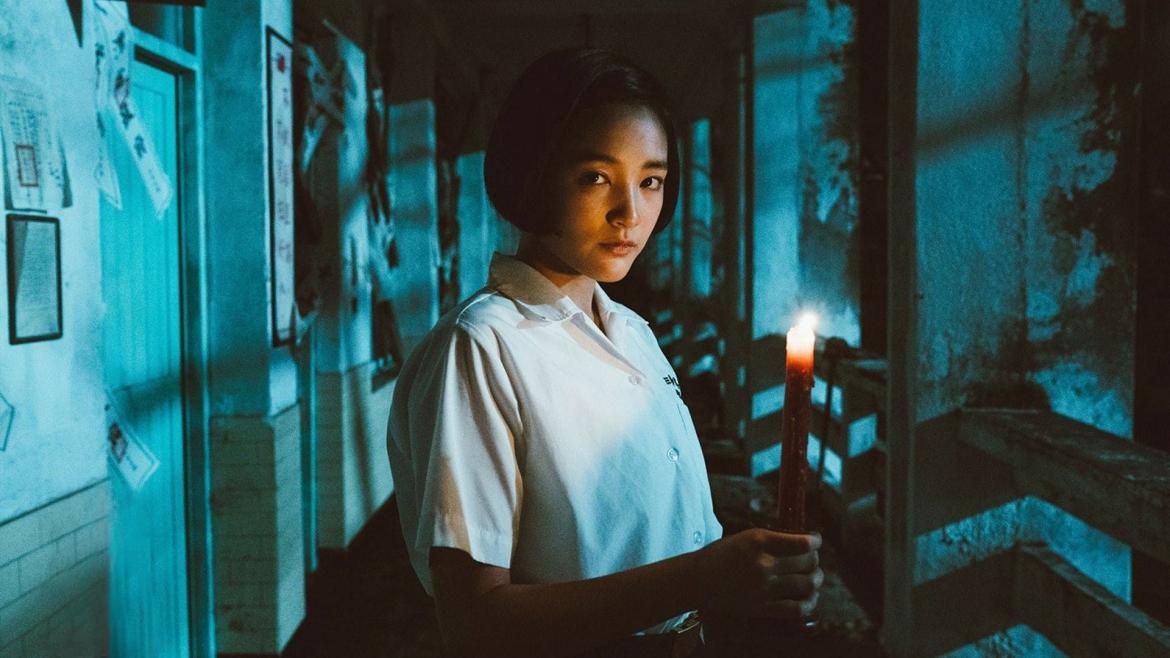 The 'White Terror' was a period of martial law imposed in Taiwan for 38 years, from 1949 to 1987, with the intent to suppress political dissidents critical of the ruling KMT party. 140,000 Taiwanese citizens were imprisoned and 3-4 thousand were executed after being accused of spying for the Chinese communist party. This tragic chapter in Taiwanese history served as the backdrop for a popular 2017 video game called Detention, which in turn was the inspiration for John Hsu’s debut feature of the same name.

The story follows two high school students in 1962. Wei (Jing-Hua Tseng) is a member of an underground study group that meets in a storage room to share and transcribe banned books. The group is organized by two teachers, Mr. Chang (Meng-Po Fu) and Miss Yin (Cecilia Choi). Wei has a crush on a girl in his class named Fang (Gingle Wang), who in turn has a flirtatious relationship with Mr. Chang. One day, Wei and Fang awaken to find themselves trapped in a haunted, apocalyptic reflection of their school. They’re faced with ghosts and monstrous militant faculty members as they try to piece together what has happened to their friends, their teachers, and themselves.

Even if, like me, this is your first exposure to this story, it’s not hard to see that the foundation and structure of this movie is built on video game logic and tropes. The movie ping-pongs between the POVs of Fang and Wei (the two playable characters in the game) and jumps between flashbacks, the “real” world and the haunted world at a disorienting pace reminiscent of the Silent Hill games. There are even parts of the movie that feel like fetch quests, where a character is given an item and launches into a monologue that is essentially a cutscene. It’s almost overwhelming, especially if (also like me) you don’t know much about this period of Taiwanese history. This is a movie where it might not be a bad idea for anyone coming in cold to at least skim the Wikipedia article about the White Terror.

The good news is, Detention is worth any extra effort required. In the third act the movie snaps into focus to a degree that seemed unlikely during the perplexing dream logic of the middle and it becomes absolutely clear what and who the movie is really about. It’s hard not to compare this movie to Guillermo Del Toro’s two Spanish Civil War movies, Pan’s Labyrinth andThe Devil’s Backbone. Like those films, Detention is set in a very specific time and place and uses the trappings of horror movies to explore real world terrors and trauma on the national level. The historical context might not be familiar to Western audiences, but facing the nightmares that follow the suspension of civil law is a universal  lesson that should not be ignored.

Lady in the Water