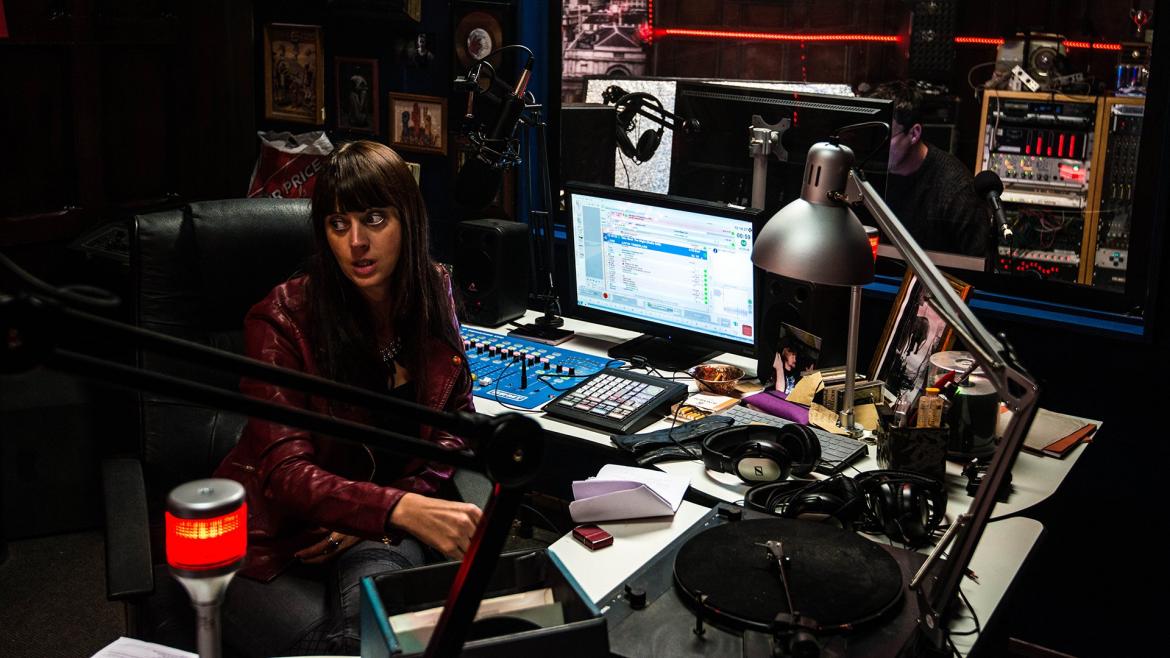 In the era of the #MeToo and #TimesUp movements, it is pretty hard to stomach a movie like Dark Signal. As women everywhere are standing up to talk about the violence, abuse, and harassment that has been done to them by men in their lives, how can one sit down and watch a movie that is so incredibly violent and hateful towards women?

Dark Signal has two different story lines working in tandem. At the heart of one we have Laurie Wolf (Siwan Morris), a no-nonsense radio DJ whose show is being cancelled. The final program will feature a spiritual medium, much to Laurie’s chagrin. The other story focuses on Joanna Ignaczewska (Kate Komisarczyk), a single mother who is struggling to make ends meat (though we never actually learn what her job is). The two stories circle round and round each other until they collide for a finale that can only be called, frustrating.

Now, you might see a movie with three prominent female characters, written and directed by a man who counts The Descent among his IMDB credits and think that you’re strapping in for a movie that may very well be feminist in its leaning. Alas, you would be wrong. I’m not clear what his specific role in The Descent's sound deparment was, but it’s a clear that the lessons of film's portrayal of women did not stick with him.

The cold open of the movie sees a young woman alone in her secluded home in the British countryside. The news drones in another room about a serial killer who has been targeting young women and cutting off their ring fingers after brutally murdering them. Lo and behold, this very killer finds his way into her home, bashes her in the head before cutting her finger off as she screams and wails. Before anyone accuses me of making an argument that I’m not; I am not insisting that any violence against any woman in any context makes a movie problematic. It is the fact that [SPOLIER ALERT] every other woman in the movie is treated to the same fate for crappy reasons and with little redemption or empathy for any of them that has my hackles up.

Women in this movie are treated to horrendous violence over and over again. As the ghost of the murdered woman attempts to warn others and help them to find her killer, she is no more than a voiceless jump-scare machine. And when the film finally shows its hand and reveals the killer’s identity it is neither surprising nor interesting. It was Laurie’s editor and long-time partner the whole time. He tells her that he’s been luring women off the internet and then murdering them before admitting that he was the reason she had a miscarriage years before (I think, I seriously rage-blacked out a lot of this movie as soon as the credits started). Even when Joanna, our defacto final girl, has her “triumphant” show down with the killer the fight scene features an already wounded and weakened Joanna repeatedly being punched in the face and thrown to the ground.

As a film that went straight to VOD and is currently available on Netflix I think that some might argue that our standards should be adjusted, and maybe in some cases their right. But as the models for horror distribution change and expand, and when Britain also gave us the small, indie, A Dark Song, I think it’s only fair to ask more of our movies. At the very least, I feel entitled to expect to watch movies that don’t make me feel personally devalued for my gender. As the hashtag says, Time’s Up.