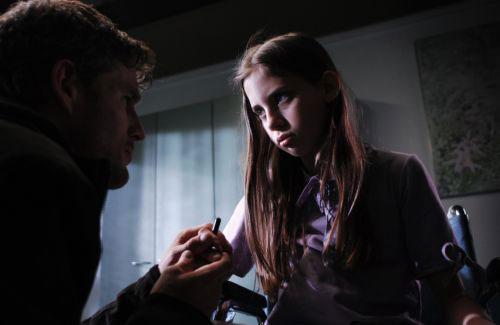 Fantasy based films with costumed rock stars playing the characters that they play onstage form a small and often unintentionally hilarious subgenre. Anyone that has picked their way through ‘Kiss versus the Phantom of the Park’ or John Mikl Thor’s “Rock and Roll Nightmare” will tell you that the results of such endeavors is usually not good. Watch one of the two titles I just mentioned and the reason for the genre’s dearth of films becomes evident pretty quickly. Dressing as a hulking beast and standing in front of thousands of well wishers with a Jericho-sized wall of sizzling amps behind you is cool. Replace the amp stacks and the fans with a camera and a script and looking cool becomes a much bigger challenge. In fact, some would say it is a virtually impossible feat to play it straight dressed in outlandish rock ghoul attire. I concur, unless we are counting the cortex-fucking, creepy brilliance that is “Sergeant Pepper’s Lonely Hearts Club Band”. Three words, Frampton, Bee-Gees, Satin.

The latest entry into the subgenre comes to us courtesy of Finland’s Eurovision darlings Lordi. Far from being an expert on Lordi, I’ll just say that to me, they seem to fall somewhere between Slipknot and Gwar in the looks department, and musically the sensibilities impress as a combo of Tristania and Alice Cooper’s ‘Raise Your Fist and Yell’ album. The nice thing is that having Lordi knowledge is not necessary for deriving something of value from their feature film debut “Dark Floors”. It may actually be to your benefit not to be familiar with them.

“Dark Floors” tells the story of an autistic girl named Sara who is hospitalized and undergoing tests of some undisclosed diagnostic nature. When we meet Sara she is being shoved into an MRI machine which subsequently goes haywire and starts billowing smoke. Sara’s father Ben is understandably upset and decides to pull her out of the institute that evening. A sympathetic nurse gets into the elevator with them trying to talk Ben into staying.They are joined by a nattering businessman, a decompensating homeless man and a security guard.

The elevator stalls between floors six and seven then opens up to reveal a completely empty hospital that is being overrun by dark forces. The group realizes soon enough that they are trapped and eventually they are beset by a quintet of ghouls bent on tearing them apart.

This is easily the best film of the monster band subgenre. But as indicated before the competition here is both sparse and limp, even if it is fun at times. “Dark Floors” is among the most expensive Finnish movies ever made. In the states that might suggest a bloated mess of a horror film, but the price tag here was a modest 4 million dollars. At least some of this money went towards making the film more internationally marketable by having an English speaking cast and an unembellished cultural setting. The rest of the budget seems like it was smartly distributed to things like sound design and art direction.

The film has some significant problems to go with its upside. The characters are thin, stereotypical, and mostly forgettable. Dream logic prevails over so much of the story that the purpose of many details is either unclear or glossed over. And not be mean, but the Lordi track written specifically for the film; awful.This criticism dovetails nicely into the least successful part of the movie, the band itself.

While Lordi are much better suited to their roles than was Kiss or The Bee Gees or Prince in “Under a Cherry Moon”; there is nonetheless a cartoonish and distracting quality to their appearance. The lone exception is Lordi or Mr. Lordi whose big biker overlord look works well for the final showdown. That the calculated, garish goofiness of the band is out of step with the tone of the film, is both an error in aesthetics and a testament to what director Pete Riski and writer Peka Lehtosaari have done well in terms of atmosphere.

A copier spits out images of a screaming face locked in blackness, stairwells are blocked by corpses and charred bodies crumble as the corridors of doom start to echo the characters’ actions back to them. The early moments of “Dark Floors” manage some slow, scraping dread. This mood is largely due to the directorial restraint shown throughout the first act and a half of the film. Add to this some nice editing and the viewer is quickly submerged in the fractured world of the hospital gone to the demons. The texture is further enhanced via some impressive sonic layering with a nice array of bassy thumps and garbled transmissions that maximize the tension before the monsters start to appear.

Alas the monsters do appear and they are a let down. This reason alone keeps me from pushing more praise onto the film. For while it may be the greatest cosplay rock and roll monster movie ever, ultimately this vehicle and its drivers suffer the same flat tire that hit both Kiss and Thor. Namely that most of the good stuff comes in spite of the band, not because of them.

In fairness I should probably say that because of my familiarity with Lordi it was difficult at times not to think about the campy absurdity of their songs and videos while watching them play it straight in the movie. Perhaps if the viewer is not up to speed with the group’s personas their appearance in “Dark Floors” will seem less incongruous. The good news is that if you can’t get beyond Lordi, you can always go back and watch Peter Frampton and the Brothers Gibb have the mother-of-all slap fights with Aerosmith atop a stack of gold coins. Sgt. Pepper’s the movie… that is true horror.