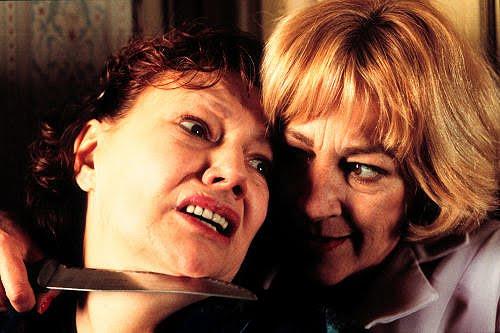 Maybe it’s a symptom of my scorn and disdain for my fellow man, but I’m a sucker for movies populated with low and petty people. Unambiguous good and evil works fine in fairy tales and American Westerns but there’s something about a movie where the protagonist and the antagonist are both on the dark side that makes my Grinch-sized heart swell with schadenfreudic joy. Today’s study in poor moral character is Spanish director Alex de la Iglesia’s dark comedy/thriller “Common Wealth” (aka “La Comunidad”).

Aging, down-on-her-luck temp real estate agent Julie has just lucked into an unbelievable opportunity. Her latest assignment is a surprisingly grand apartment hidden away in a somewhat shabby building. The apartment is so nice, in fact, that she decides that the thing to do is for her and her boyfriend to move in until she can find a renter. When the reclusive old man in the apartment above her dies, she soon finds herself pitted against a long-standing conspiracy of greed conducted by the oddball assortment of characters who also live in the building.

It turns out that the old man hit it big on sports betting and unbeknownst to the tax agency or anyone except the residents of the building, has a huge sum of money hidden away in his apartment. The old man had good reason to become a recluse: the residents had been waiting years for him to die so they can take his money and divide it up between them. Their long-standing plan is ruined, however, when Julia finds the money first and takes it for herself. What follows is an increasingly deadly battle of wills between Julia and the tenants, who will stop at nothing to get the money they think of as rightfully theirs.

The residents of the building are a colorful assortment of misfits and scoundrels ranging from a rico suave Cuban dance instructor, a socially retarded peeping tom in a Darth Vader costume and a variety of crotchety old ladies who wouldn’t be out of place in a Monty Python sketch. Their interactions with Julie come to a slow boil as each side raises the stakes in their attempts to claim the money as their own. When Julie sees through their false friendliness and outright trickery they raise the stakes and resort to more lethal schemes.

“Common Wealth” is very much a love letter to classic Hitchcock films, from the darkly humorous style to the double cross-laden plot to the Bernard Hermann-esque score to the sweeping cinematography. The climax even plays out on a public monument high atop the city streets. While succeeding as a dead-on ode to the Master of Suspense, the film also shows elements of other influences such as the lurid color palette of Pedro Almodovar and a John Waters-like obsession with grotesque humor. Less successful are the Star Wars and Matrix gags that might have been fresh at the time but after ten years of nonstop lazy parodies haven’t aged very well.

Carmen Maura’s performance as Julie is the anchor of the film and earned her the Spanish equivalent of the Oscar for Best Actress. For most of the film she is just as conniving and petty as the building residents and there’s a great deal of fun to be had in rooting for the lesser of two evils. For that reason the ending feels like a bit of a cop out. After an hour and a half of cheering on nastiness, a moral message rears its ugly head and Julie has a not entirely convincing change of heart. It feels like an unwelcome dose of medicine hidden in the last bite of an otherwise delicious steaming bowl of misanthropy. It’s the kind of crowd-pleasing ending that can usually be expected in movies like this but it feels a bit out of place after such an uncompromisingly fun romp through the dark side of humanity.