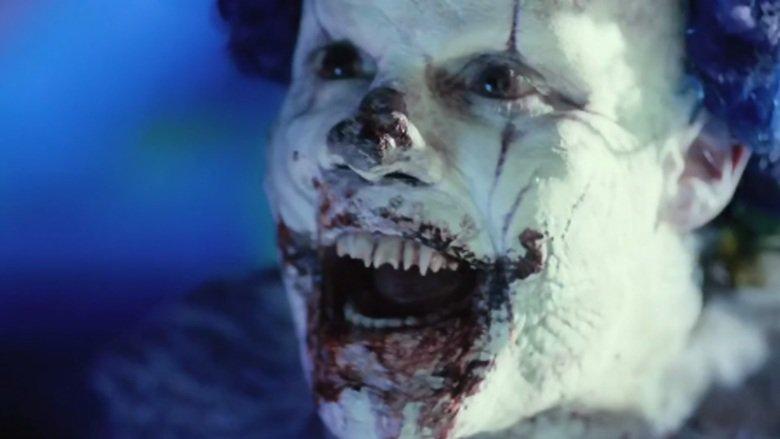 Blame it on Pennywise or John Wayne Gacy, but clowns revolt so many people, so much, that it’s a wonder they’re so underused in horror (and so overused at children’s birthday parties). Maybe Clown explains why: the makeup is terrifying, but it’s a pretty tall order to successfully blend goofiness and fear.

The movie begins with a strange piece of dumb luck: when the clown he’s hired for his son’s birthday doesn’t show, realtor Kent McCoy (Andy Powers) chances upon a dusty old costume in a house he’s selling and decides to play the part himself. After accidentally falling asleep in it, he discovers it has become impossible to take off: blades break when he tries to slice open the fabric, the wig has grown into his own scalp, his face has permanently taken on a chalky hue. Most memorably, his bulbous red nose is grafted to his skin, and when his wife puts her full weight behind wrenching it free, she rips off a sizable chunk of his own flesh. He is literally turning into a clown.

Kent’s physical transformation continues (turns out clown shoes are big for a reason), but the more troubling development is psychological -- he soon develops a sickening compulsion to kill children. Desperate for help, he tracks down a man named Karlsson (Peter Stormare, always welcome) the brother of the clown suit’s late former owner, and learns its sordid history: it isn’t a costume at all, but the actual skin of a centuries-old Icelandic demon called the Cloyn that possesses anyone who wears it. The curse can only be lifted in two ways: decapitate the wearer, or let him kill five children.

Clown’s production values, from photography to the body-horror effects, are solid, and if you’re looking for a C-grade gorefest with an original idea or two that won’t skimp on the kills or bore you stupid, you’ll be satisfied. But because we follow the story from Kent’s perspective for the first act--a straight-faced black comedy--he’s too familiar to be actually scary. Even when the POV shifts to his wife Meg (Laura Allen), Kent never feels like a threat that’s pursuing the viewer, just a monster you’re watching be unleashed on anonymous strangers (a scene that takes place entirely in the interconnected plastic tunnels of an arcade is an unsettling exception).

The movie’s leap from comedy to horror is clumsy, and the filmmakers seem squeamish about their own subject matter (and I can’t really fault them for this) once Kent starts killing children. Their solution--to suggest that some of the kids are asking for it--would be a high wire act even if they nailed the tone, but they plummet right off. There’s plenty of gruesome effects work and gallons of gore, but the director never gets the audience properly in the mood to be terrified. With too much time spent trying to understand Kent’s predicament when you’d rather be rooting for the people running from him, Clown is the origin story of a monster that thrills and disgusts without ever getting under your skin.