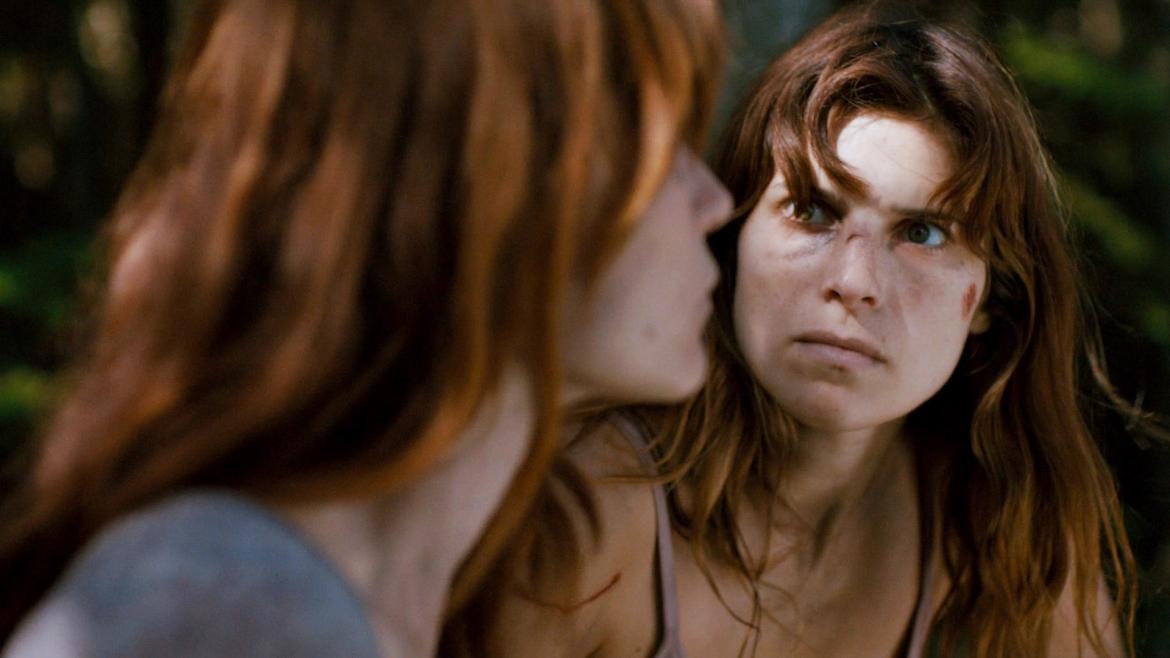 Stories of rape and revenge are common enough that they has become their own genre within the greater pantheon of horror. The typical story of a rape/revenge horror can generally be gleaned from the categorical label; someone, usually a woman, is assaulted and then seeks revenge, in all sorts of horrifying and gory ways, on her attacker(s). Black Rock has been labeled by many as just another addition to the overall pile, but it isn’t simply that. With its subtle subversions of the rape/revenge trope, Black Rock ultimately tells a much different story about violence and survival.

Sarah (Kate Bosworth) is torn between her two best friends, Abby (Katie Aselton) and Lou (Lake Bell). Determined to get her group back together, she tricks the two women into a trip to a secluded island off the coast the Pacific Northwest where the three spent many of their childhood afternoons. The rift between Abby and Lou runs deep, and while they are willing to put on their nice faces for Sarah, the competition and sniping between the two is ever-present. When the three meet a group of hunters that Lou recognizes, Abby invites the men to join them for the night and begins flirting with one named Henry, seemingly to piss Lou off.

As the fire burns low and the group grows more intoxicated Henry and Abby both wander off into the woods under the guise of collecting firewood, leaving their friends to continue chatting. Here, the two scenes continue simultaneously, intercut with one another to maximum effect. As Henry and Abby find each other and begin to fool around—their passion slowly escalating—his buddies begin to tell Lou and Sarah that they all met during a tour of duty in Iraq. They say that they have only been back for a few days after leaving with a dishonorable discharge, hinting sinisterly that sometimes you can’t follow protocol and that the government didn’t like how they did things. As the men's story becomes more dramatic, so do Henry's actions towards Abby. When she ultimately decides that she would rather go back to the camp fire, he starts to become aggressive towards her, his face contorting from flirtatcious to horrifying in a matter of seconds. What sets the attempted rape scene apart—not only from many others in similar films, but from many people’s conceptions of rape as well—is that it isn’t some monster who attacks Abby, but rather the guy that she has been flirting with and beckoned to join her in the woods. This situation was consentual and fine, unitl it wasn't. None of these points, however, are used to in any way mitigate the fact that what Henry does is wholly unacceptable. The audience is not meant to feel even the slightest empathy for him as he becomes aggressive toward her. Rather, we feel horrified and threatened with her. Not an ounce of blame is placed at Abby's feet, and by doing this, the film questions a common narrative about what consent looks like. Henry's friends, who call Abby a slut, saying she urged him on and refusing to even accept the possibility that he did anytihng wrong, represent a broader narrative within our culture when the story comes down to the word of the victim against the accused. When, in an attempt to free herself, Abby accidentally kills Henry we see the film really take off.

Once the other two men realize what has happened, they lose their minds, threatening to kill all three women before beating them to the point of unconsciousness and tying them up on the beach for execution. This clear and pronounced plot shift propels us into our next act as the women have to fight for their survival against two trained killers, and acts as another subversion of the typical story. The event to be avenged here has shifted from the attempted rape to Henry’s death. The "revenge" that Abby wrought on her would-be attacker, wholly by accident, becomes a catalyst for further violence as the fragile psyches of the two men snap. Instead of women going to extraordinary and often extreme lengths for revenge, our protagonists are left struggling to stay alive. The rest of the movie plays out accordingly, with Abby, Sarah, and Lou processing and then accepting the circumstances of their living nightmare.

Coming in at a trim 82 minutes, Black Rock is a quick, but powerful film. While the action doesn’t start immediately, the first act squanders none of its time, allowing the audience to observe the characters and get to know them. With a micro cast and a small budget, we get three very well-drawn female characters with male counterparts who, though not quite as finely and distinctly formed, are still decidedly different from each other in their respective presentations. The screenplay comes from indie darling Mark Duplass, a striking departure from his earlier credits-like The Puffy Chair and Jeff, Who Lives at Home-while his wife (and star of the movie) Katie Aselton directed. This is a movie concerned not only with what one would do for survival, but with gender dynamics, female friendship, and resilience and, despite its lukewarm reviews from a critical standpoint I think it is much more interesting and intense than it's given credit for. Each decision within the movie feels intentional and most seem to fit, even the song that plays both during the opening and closing credits, bookending our story. The song is "Future Starts Slow" by The Kills and though none of the lyrics are played in the film itself, they seem a perfect fit for the story. Black Rock deserves far more credit than it has gotten for doing what it does and I intend to give credit where it's due.

In the recent past, rape/revenge has largely fallen by the wayside or been mitigated to remakes of genre standards (a la the 2009 remake of The Last House on the Left and the 2010 remake of I Spit on Your Grave) which tend to fall short of their originals while losing some of the power carried by their predecessors. Furthermore, this category of horror has long been one that is held in contention by many who argue that some come a little too close to glorigying the attack itself (think the poster for both iterations of I Spit on Your Grave). It is into this atmosphere and history that Black Rock walks triumphantaly and stakes its claim. Here is a film that does feature female nudity, but not in the situation that audiences might expect from such a film. With its statements about rape, consent, and survival, Black Rock is a movie that should be viewed and engaged, particularly by horror fans who don't consider themselves fans of the subgenre as a whole.