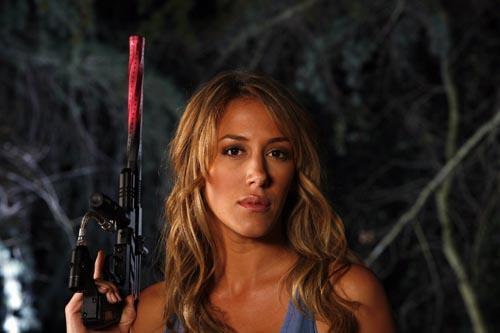 A group of programmers take a trip into the wild woodlands of Ventura County for a team building weekend of paintball and beer. The gang is a mixture of tired, straight to DVD level toadies. They are the kind of people who immediately make you question why you would invest time in watching individuals who are less interesting than the average disaffected teen working the prize counter at a local family fun center. The cast is headed up by Hilary Duff’s decidedly less enthralling older sister Haley and fleshed out with actors you may recognize from commercials and canceled TV shows. This covey of human-ish dolts plants their paintball party on the turf of a fanatical group of Calvinist, “Handmaid’s Tale”, Doomsday thumpers. Before you can say ‘no cell reception’ the techies are killed, captured or sexually enslaved by the commune, and the surviving programmers must fight their way back to civilization.

From the opening credits there is a sense that all we will see has been seen before. The titles mix WWE production values with stock time lapses of rotting animals and a pounding but non-descript latter day metal song. Technically it is the kind of thing that will get you an ‘A’ on your Edit 1a final in film school. Stylistically, it is not only gauche as all hell; it is the first of many missteps that form the mangled aesthetic spine of the film. This movie is tonally barren. Nobody took time in pre-production to actually figure out how to fuse script, shooting style and performance in a way that would allow for consistent atmosphere and audience immersion.

“Backwoods” is about as phony as it gets in the horror realm and even the casual fan will sniff out director Marty Weiss’ lack of respect for the audience within the first 10 minutes. Weiss was also the mastermind behind the unwatchable “Vampires: The Turning”. If you suffered the abuses of that film then you should have a pretty good idea what awaits you within the “Backwoods”. If a film’s merit were measured in snores and drifting attention this would rank as a masterpiece. Forget the idea of scraping deeper to find value; this film fails on the basics. The characters, plot and tension are all so underwhelming that early on the viewer will start to pin their dwindling hope on gore and nudity and then you remember, this is a TV movie (Actually I found that out a little late in the game). In its ability to disappoint this film does not disappoint. No bare party parts male or female, no redeeming surfeit of gore ala “Laid to Rest” and no earthly reason to endure the last 70 minutes of this 84 minute wedgie.

To be fair, there are exactly two praiseworthy moments in the movie; a well done arrow to the neck and a very impressive swan dive suicide stunt. Beyond those short shots there is a whole lot of derivative, cowardly filler. It is “Frontiers” meets “The Forest” executed in the style of “The Famous Jet Jackson”. Somewhere near the end of the film when I started counting up the indignities heaped upon me by this mess, I realized I had been spared completely in the region of bad CG. Ah but Marty Weiss was holding that little trick as the final ball-peen to the knuckles of his long suffering audience. During the last big kill we are treated to a full frame splatter of the lowest imaginable quality.

“Backwoods” might have been enjoyable if the producers had figured out that just having access to a creepy house, a forest, and a bunch of people to kill off doesn’t make a film horrifying or entertaining. If they had decided to pull a “Cabin Fever” styled freak out and populate the landscape with odd characters instead of Killbilly clichés and dumbass paintballers, it might have attained a watchable level. This movie was ripe for a “Crying Game” moment, a syphilitic bear man with cataracts, a seven layer dip of feces and fingertips and a reappearance of the Penisaurus from “Flesh Gordon”. None of this happened, I would have remembered it if it did; right now I am having a hard time remembering anything that took place in this film. It is slipping from memory without as much as death whimper. If you happen to see “Backwoods” I pray the film gods grant you the same tender release.