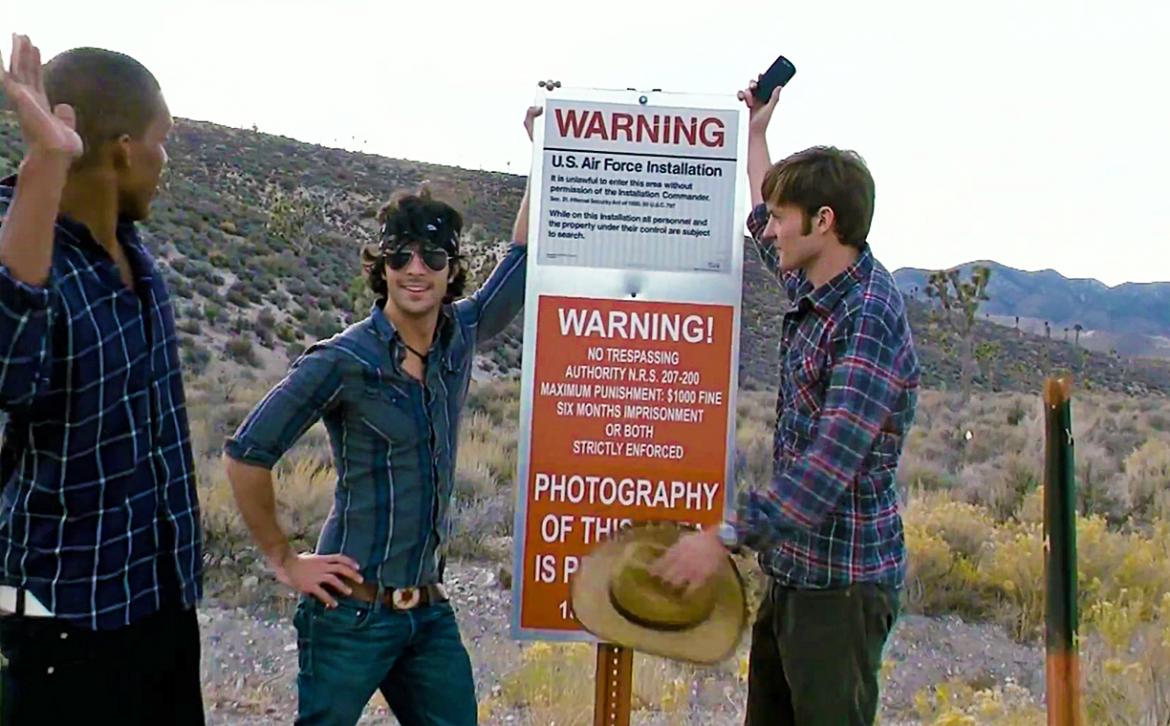 SIx years we've been waiting for Oren Peli's follow-up to Paranormal Activity.  Six years of anticipation and speculation spent wondering Area 51 would ever see the light of day. In that time Peli has been ‘fine tuning’ his found-footage alien flick, making it the best movie it could possibly be. And what a disaster that movie must have been from the beginning. The mind now boggles as to why the footage in Area 51 wasn’t just filed away forever.

Peli’s film follows a group of buddies led by Reid (Ried Warner) who have made the bold decision to break into (you guessed it) Area 51. Reid, explains that he has experienced blackouts and chunks of missing time that he’s convinced is related to Nevada’s top secret government facility. Armed with lots of James Bond gear that they’ve inexplicably acquired the guys’ plan is to expose the secrets inside the facility that the government is hiding from the public.

Keeping the plot simple is easily the best decision that Peli made when making this movie. However, there is no excuse good enough to use 60 minutes of a 90-minute found-footage horror movie for setup- you read that right, a full hour before anyone steps foot inside Area 51. Beyond that, if you are going to have 60 minutes of setup then that last half hour better so ‘butt-clenchy’ that it’s tough to walk normal for hours afterward. As is the first hour of Area 51 is so excruciatingly boring and utterly void of tension that no amount of scares in the last act could ever redeem it.

Had the first hour spent time helping the audience build a connection with the characters much of what happens would have had more weight. Instead the characters aren’t even unlikable, just hollow shells being lead to the slaughter. Once the break-in is initiated Peli is able to build tension in the wide scale of the base’s security and echoey halls. The glimpses of alien technology and use of sound in the final moments are a reminder of Peli’s once promising career. When the chaos finally starts, the typical found-footage pitfalls are on full display and topple any goodwill Peli had crafted like a Jenga tower.

Oren Peli’s ‘less is more’ approach helps to cultivate a mysterious final act, but an hour of shallow setup, an ending that can be seen from a mile away, and clichéd found-footage flaws unravel any potential Area 51 might’ve had. Six years of tinkering created a mess of a film that's six years too late as many filmmakers have come since and beat Peli at his own game. In the end, Area 51 personifies a sophomore slump to the nth degree.