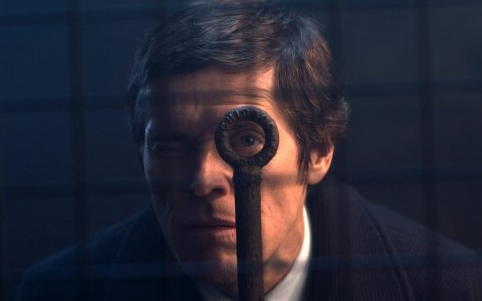 “A psychological thriller based on the concept of anamorphosis, a painting technique that manipulates the laws of perspective to create two competing images on a single canvas.”

Willem Dafoe’s Stan is a highly skilled detective. Five years before the credits roll on 2007’s “Anamorph”, Stan closed the case of a notorious serial killer. Skip to present times and Stan is now an instructor at the police academy. He gets drawn into the force again when it begins to appear there is a new copy cat killer duplicating the murders of his famous capture, serial killer Uncle Eddie. As the clues unravel, so does Detective Stan as he finds himself drawn closer and closer to a possible truth; he pinned the former crimes on the wrong man.

“Anamorph” has been compared to both “Se7en” and the “Saw” series with good reason. The comparisons to “Saw” are thinner as there are elaborate setups that involve death here, however most happen post death, not as the actual death itself. The comparisons to “Seven” do ring true however as we dive into the dark and gritty world of Detective Stan and Uncle Eddie.

Standing far above as the highlight of the movie, Willem Dafoe steals the show as the trouble Detective Stan. An obsessive compulsive who insists on order, his unease as he feels his former case work unraveling, causing his world to unravel as well, is a master of his craft here. He makes you nervous, he makes you sympathetic towards him, he makes you curious.

Scott Speedman however, manages to nearly wipe out all the atmosphere that Dafoe had worked so hard to setup. Seen formerly in the “Underworld” series, Speedman gives us an antsy and antagonistic partner who seems both confused and uncertain on his final goals. He’s dead set on breaking this new serial killer case to set himself up for a future of cop glory, yet he’s easily distracted by trying to prove Stan as a fraud. Often times tripping over himself in trying to do so, he frequently fails to keep you smoothly in the flow of the movie. Often times he’s both jarring and annoying spoiling the whole setup. SEXEDATE

For the first hour of “Anamorph”, we’re treated to a pretty engrossing crime thriller. (This is where the “Seven” comparisons come in) Dafoe and the writers combine together to give us a crime to be solved as he Stan struggles with his past. Often times we are thrown even more subplots to keep us guessing. Stan’s obsession with furniture and fabric shows his attention to detail and single mindedness; and his continued visitation of former hooker Clea Duvall who (the roommate of Uncle Eddie’s last victim) shows his compassion and sorrow for leaving this girl on her own. The problem lies in the final half hour of the film where what started out as solid and gripping, slowly fizzles out into a confused mass of extra plot threads that are never fully tied off.

“Anamorph” is a great serial killer crime thriller for the first hour. Watching Willem Dafoe do his thing is worth the price of admission alone. Unfortunately, too much confusion and artiness manages to take away precious points.