A Conversation with Shroud Eater

Working in the sweltering clubs of Miami and the surrounding area, Shroud Eater has been an undeniable force in underground, DIY metal since the release of their newest creation, "ThunderNoise." Taking time out of the hectic schedule of daily life and promoting the band, the three members of Shroud Eater, Jeannie Saiz, Janette Valentine and Felipe Torres sat down to chew on some of our questions, as we talk about life, music and doing it on your own.

So, what's been keeping you busy since "ThunderNoise's" release? How do you balance your everyday lives with work for the band?
We just finished up a 4 day mini-tour through Florida, and have been keeping busy booking shows and tours well into May, as well as fleshing out some new tunes. Next up we are touring with our friends in Hollow Leg through Georgia, Mississippi and Louisiana for a 5 day mini-tour.
How does it feel to release an album entirely on your own?
It’s a lot of work, a lot of things to take into consideration and always a learning process. It can be daunting and stressful at times, but really it’s a matter of keeping the goal, to finish and release an album, within sight no matter what delays or roadblocks we may be experiencing at the time.
How do you feel about "ThunderNoise" as a complete album? Did it turn out better than you expected or are there aspects you would change if you could do it again?
There are always aspects you wanna go back and change. I think it’s just human nature to feel that way about things that we create.
What freedoms do you gain by releasing music on your own?
Well I suppose we don’t have to worry about owing a label or something a bunch of money, since we pretty much paid for our stuff up front and on our own. While that’s initially a hefty chunk of change, as we started touring in support of the album and getting the collective “word” out there for it, we also started to make that money back with no middle man to worry about. Essentially, releasing music on your own can leave a resourceful band acting as their own record label- it’s a lot, A LOT, of things to consider and put your energy into, but it can be done. Even without the support or the “cred” you get when you’re on a label.
What are the difficulties when producing and releasing an album all on your own? Is there something in process that you never anticipated?
There will always be difficulties producing and releasing an album, whether it be independently or through a label. I wouldn’t say that the band ran into difficulties, I mean we all went in and did our little song and dance and got it recorded. That was possibly the easiest aspect. It’s all the stuff I had to do after the fact - the artwork, figuring out casing for the CD’s, how to get it printed, buying supplies, contacting people to get the word out about the release, setting up websites so that the album could be listened to and bought, etc... That’s the stuff that can be daunting when you’re doing things independently. You don’t just record and then magically everything comes together and your band has a finished product and press, reviews etc. You have to work - and balancing that much work with “real” day-job work, relationships, and just trying to keep your head up through all of it is really the biggest difficulty.
Would you prefer to have the backing of a major label for the album's release?
Yeah, it woulda been nice, sure. As I said it’s a lot of things to take into consideration when releasing an album, and having the help, credibility and backing would have been cool. However, we’re a relatively new band in a sea of awesome bands, so I never really thought that anyone but the band would be putting it out.
Do you believe it's possible to be a huge success without major backing?
I believe you can do anything you want and go as far as you want to, it’s a matter of personal dedication, sacrifice and perseverance. Oh and money. Money always helps.
What inspires the music of Shroud Eater? Where does the energy come from?
Injustice, anger, the human condition, the stupidity of others, the laws of universal entropy. Out of the three members, I’m definitely the pessimist so my energy for songwriting tends to come from a darker place.
What other artists/musicians do you look to for inspiration? Where does that sludgy sound begin?
Generally we all have our main influences that we usually fall back on. For me personally I find inspiration from not just music, but reading poetry, myths and things like that. I try to recreate what I hear or feel through monstrous amp wattage and take it from there. 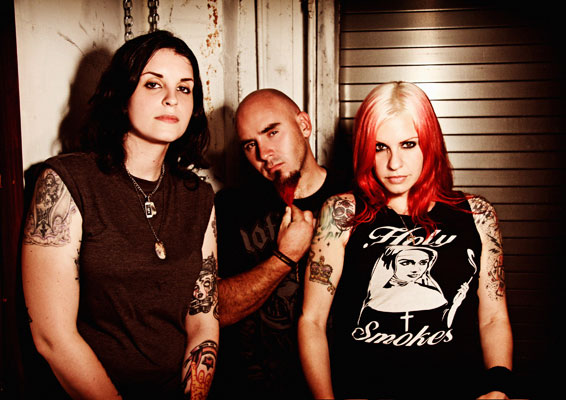 How much credit for your success do you give, if any, to the instant exposure generated by internet word of mouth?
Well just because something is exposed on the internet doesn’t necessarily mean someone’s going to think it’s any good or give a fuck about it. I would say that traditional “word of mouth” - i.e., people who have seen us play live tell their friends, who tell their friends and so on, is still the primary way people hear of us. We have fans and friends who have only heard our recorded stuff online and who really like what we do, which is awesome, but I think a lot of people need to see and hear something in the flesh to really be affected by it. Those are the people who will, after seeing us live, find us on the internet and keep in contact with us, or keep up to date on what we’re doing, where we’re going, if we’re doing any new releases etc.
Janette, do you let your music feed into your photography, or does it work the other way around?
My photography is really the opposite of what we do musically. What I do with my work is centered on being lavished in femininity - we giggle and talk about shoes and makeup. But that's not 100% who I am. The band and music we create helps me to stay stabilized.
Felipe, describe the path you took to end up in Shroud Eater.
I moved to the U.S. from Colombia and lived with my family. Back home, I didn’t have enough money for a drumset, so I played and learned on buckets, boxes and pillows. When I moved here, I got a job, saved up some money and bought my kit. I wanted to get out of Florida for a while and see what else was out there so I grabbed my things, my drum set, and drove and drove on I-10 until it ended. My destiny took me to the boardwalk, to Venice Beach, I saw all these people, playing music, making necklaces or dancing and doing different things along the beach, so I got a spot and set up my drums and would play there everyday, all day. I didn’t have a place to live so I would put all my drums locked up in my truck, and then sleep under the lifeguard houses on the beach at night. After like 7 or 8 months of that, I got a job through a friend and was able to get a place to stay, but I was still not really liking L.A. and the bands and scene there. I moved back to Miami, because my family is here and I felt like it was the right time to do that. I jammed with a few bands but it didn’t feel right, they wanted me to play drums from a computer and I didn’t like that. Then one day I hooked up with Janette and Jeannie, and they told me “play whatever you want, let’s just jam,” which is what I had been wanting to do all along anyway, and we just kept playing as a band.
What keeps a man going when he's in that predicament, and how rewarding is it to be in a band with an album?
It feels great to be where we are right now - I have experienced many obstacles in my life, and now, being in this band and playing this music, following my heart it’s led me to the right place. It shows that if you want something bad enough, life will give you the opportunities, it’s not always easy, you have to work for it, but it pays off.
What's the ultimate goal for Shroud Eater? Do you dream of being the biggest band in the world, or are you more inspired by the DIY nature of the work you're doing now?
The ultimate goal for us is to be able to live our lives and keep doing what we’re doing musically. Being on the road, playing music, recording music, meeting new people is wonderful and we definitely want to be doing a lot of that in the future.
Critical reception has been pretty solid for "ThunderNoise." Did you have an expectation for how it would be received? What's the most flattering thing in your mind that someone said about it?
No expectation, really. Actually I guess I always half expect a review to say the record is terrible, so if it doesn’t, I’m pleasantly surprised.

Making it look easy since the release of "ThunderNoise," keep your eyes and ears out for one of the (literally) hardest working bands in the business. The music is great, the attitude is great, and with luck, Shroud Eater will continue to grow. Special thanks from me to the ladies and gent of the band for taking a moment to talk, and special thanks also to all who helped make it happen. You can, and should, check out more Shroud Eater here.