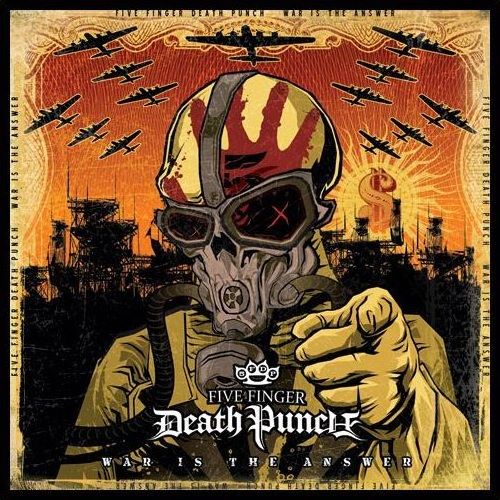 The first and most important thing about Five Finger Death Punch's album "War is the Answer" is that it is steadfastly honest. There is no dense allegory, no convoluted metaphor, nothing that makes the listener strain to understand the album's intent. This is pure, unadulterated American heavy metal, with no sidebars, no apologies and no layers. This is the album's most redeemable quality and its strongest cornerstone.

"War is the Answer" does have one important dichotomy, though. Zoltan Bathory, the band's organizer and guitar player, is born and bred in Hungary, and twists the American formula on heavy metal as a result. The end product is an album that endeavors to be layered like a European power metal band, but lands punches like a Western one. There are circumstances under which that would logically produce the greatest album in the history of heavy metal. This is a good album, but it falls short of those possibilities.

Part of the difficulty in trying to represent both the dramatic, orchestrated nature of European metal and the never-say-die hammering attitude of American metal is that it's terribly arduous to do both at once. Five Finger Death Punch gives it a serious effort, but in a song like "Dying Breed," the unceasing pounding of the razor-edged verses leads to a clunky, cumbersome transition to the arcing, melodic emotion of the choruses. “No One Gets Left Behind” is a solid song, but struggles with the same issue.

As this continues, the album ends up being more scientific mixture than solution. It can lead to some aimless tracks, where the two fail to meet in the middle. It's almost as though these songs could be separated into their distinct halves and then condensed to be two entirely different songs. “My Own Hell” falls into this trap a little.

The album loses some steam in the middle, as they delve into softer, more muted melodies like “Crossing Over.” I’ve come to regard softer metal songs from bands like Five Finger Death Punch with a more cynical eye. Not to insult, but bands of this nature don’t often possess the subtlety or sublime artistry necessary to craft a truly memorable melodic song. The end result too often ends up being album filler.

“War is the Answer” works far better as a shotgun than a scalpel anyway. Precision is put aside for thundering, vicious percussion (the title track,) and assault rifle gallop riffs like the ones in “Burn it Down.” Staying within those boundaries, Five Finger Death Punch has an album they can be proud of. They even manage a rarity in today’s metal universe, which is getting by with an album that does not showcase high-flying, twisting, crunchy guitar solos. With the exception of the title track, those devices are kept to a minimum, and instead the untiring beat and drive are kept moving.

Instrumental tracks are very hit or miss for me, but “Canto 34” is an excellent piece of music, and explores the band’s metal themes without wandering into unsafe territory. Rare that an instrumental on the B side would be a strength of the album, but it really comes through nicely.

I liked “War is the Answer” more on the second pass than I did on the first, and I suspect that it may continue to grow on me over time. While there’s nothing singularly explosive about it, the album just possesses a certain infectious something. The beats are addictive, the guitars are distorted and powerful, and the album as a whole is simple and unforgiving.

I like “War is the Answer” much more than I thought I would. It might not stray too far from convention, and doesn’t push the songwriting or lyrical envelopes, but it’s a fun, energized listen, and is irrepressibly honest. Really, that’s what I walk away with. Five Finger Death Punch has done a lot to distinguish themselves from the din of “edgy” radio metal, and this separates them from the crowd a little more.