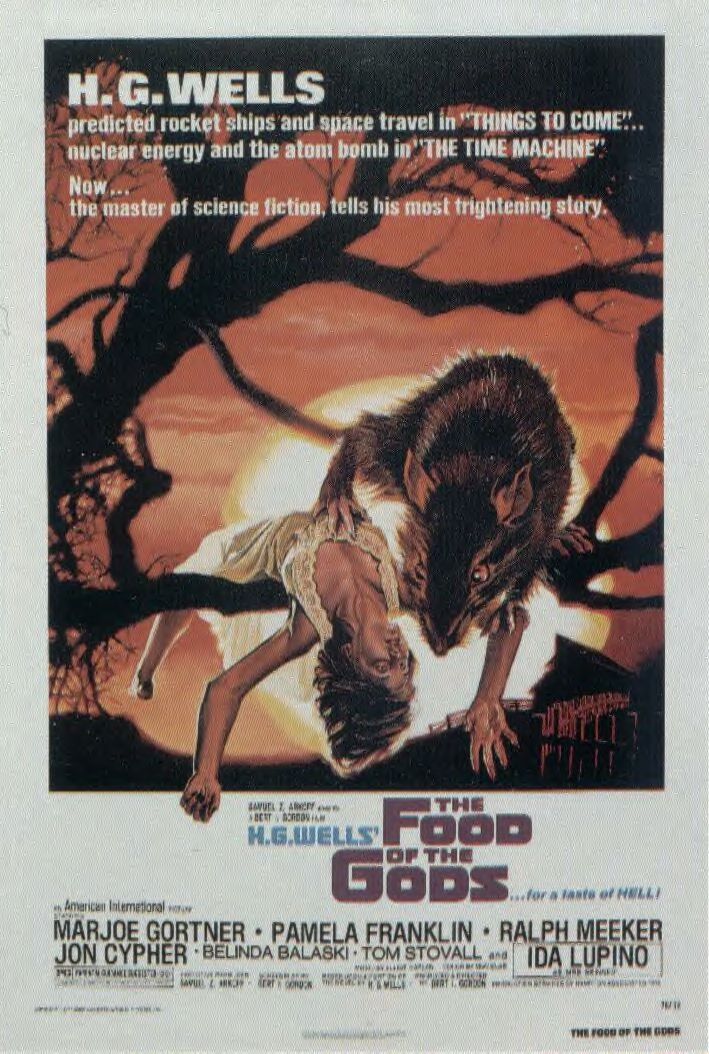 Final Girl Film Club: The Food of the Gods

This is another entry in the always exciting Final Girl Film Club. Click the link to see what all the other cuckoo nutsos are saying.

Earlier this week, after a hard day of gunning down wolves from a helicopter and drilling for oil up a polar bear's ass I was reminded of something my father used to say. He would say, “Morgan, one of these days the earth will get even with man for messing her up with his garbage. Just let man continue to pollute the earth the way he is and nature will rebel. It's going to be one hell of a rebellion.” Of course I never took him seriously, but I still remember the way he looked at me when he said “You'll never know when and where it's going to happen and once it starts you'll never know how and when it'll going to stop.” I began to question myself. What kind of earth am I leaving behind for my children and/or clones? What will happen to society when the fossil fuels run out? Why did my father call me Morgan?

It was then I realized that my father had never said anything so blatantly batshit crazy to me and I was once again confusing reality with shitty movies. This is my problem and I must own it. I still have to remind myself that that mannequin I “dated” in high school never really came to life.

The shitty movie in this case is 1976's “The Food of the Gods” directed by Bert I. Gordon, a man responsible for almost a season's worth of MST3K episodes. The film is “based on a portion” of a novel by sci-fi founding father H.G. Wells, in this case the “portion” consisting entirely of 1) the title and 2) ZOMG giant ratsss!! On an interesting historical note, this film is often believed to have started the rotation of H.G. Well's corpse that later caused thousands of pounds of property damage to a historic London cemetery in 1996 upon the release of “The Island of Dr. Moreau”. This review is dedicated to those injured and maimed on that horrible day. Never again.

The titular “Food of the Gods” is not, as one might believe, a slab of ribs from Dreamland BBQ, but some white goo that makes giant-sized animals. One day on a remote and vaguely defined island a farmer was a-shootin' at some food, found the goop and made the logical leap that it would be a great thing to feed his chickens. At this point as a public service announcement I'd like to remind everyone out there reading this that if you come across some unidentifiable goo in the woods, don't eat it, don't poke it with a stick, don't make a superhero costume out of it and don't sell it by the pint as an alternative to ice cream. Just leave it be.

After eating the goop infused grain, the chicks grow to unbelievable sizes and while enormous coc...erm, roosters might not seem so bad, the farmer and his wife carelessly leave the miracle slop in an uncovered jar (helpfully labeled “F.O.T.G.) where it's easily accessible to the vermin in their shockingly unhygienic house and soon the island is overrun with giant wasps, maggots and rats. Thankfully, the farmer didn't have a cat, as the combination of a giant puddy tat and and an oversized male chicken would pose too much of a temptation for the crass joke inclined reviewer.

Fighting the giant rat menace are a mixed bag of 70's hero types and obvious victims. There's a football player, a pregnant woman (guess when she goes into labor!) and a “lady bacteriologist” all up against the twin terrors of giant rat head puppets and forced perspective rats climbing on matchbox cars and dollhouses. The special effects are primitive to say the least, but they don't really look any less believable than modern-day bad CG. Well, okay, that's a lie. They look a lot worse. They wouldn't fool an infant these days but if they remade this movie the rats would have tribal tattoos and Slipknot would play every time they were on screen so I'll take forced perspective over forced extremeitude any day.

Calling “The Food of the Gods” a good movie would be like sticking a candle in a Twinkie and calling it a birthday cake. One thing about Twinkies, though, is that while they're never really good, they also never go bad. You could bury this movie and a few Twinkies in a time capsule and in a hundred years time when mother nature has happeninged all over us some little guy riding on the shoulders of a dimwit will find it while rummaging for some old tires to make a loincloth out of and the film and the food inside will be every bit as fresh as they were they day they were made.

That's meant to be a compliment, by the way.