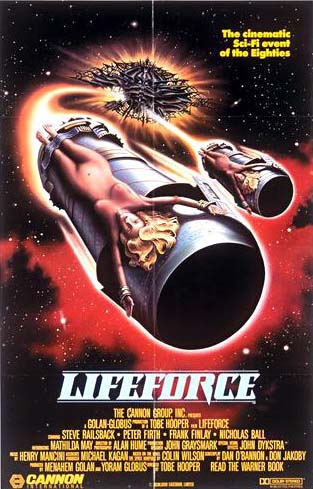 At some point during the production of Lifeforce, Tobe Hooper must've realized that he was making a Golan-Globus movie about naked space vampires who turn their victims into exploding zombies and that the premise was a pie pan UFO on a string away from being Plan 10 from Outer Space. The way I see it, Tobe had two options: either go for the tongue-in-cheek, self-aware path that ruins so many movies today by constantly winking at the audience to assure us that the filmmakers were fully aware of the ridonkulous nature of the film or to play it straight and shoot for the "hard 'R' adult” (AKA manchild) market by pumping up the nudity and gory special effects. Pardon my knuckle-dragging, but if there are two things that'll keep my attention in a movie it's gratuitous nudity and 80's special effects. Neither one can make a bad movie good, but they sure as hell can go a long way to making just about any movie watchable.

Watchable is a pretty good adjective to describe Lifeforce. Like a lot of guys my age, for me sex ed didn't come in school but in the video store and on Cinemax. Back in those days, Lifeforce was spoken about it reverent whispers by horny but clueless pre-adolescent nerds everywhere. It had the shining, eternal life-granting holy grail of cinematic nudity: full-frontal. And lots of it. In fact, the lovely Mathilde May spends about 90% of her screen time completely nude. Lifeforce would've been a hit in the 12-year-old boy demographic if the entire movie consisted of nothing but Mathilde May walking around London naked while she pays her water bill and orders a combo meal from Subway, but it went the extra mile by having her occasionally seduce dudes while Ark-of-the-Covenant-opening-Nazi-face-melting-style animated lightning swirls around and turns her hapless paramours into animatronic zombie puppets that totally flip out and kill people until they explode. High five, Tobe, up top.

The screenplay, by legendary genre screenwriter Dan O'Bannon, starts off cribbing pretty heavily from O'Bannon's earlier hit Alien. In a batcave tucked away in the tail of Haley's Comet (how 1986 of them) a group of astronauts find three crystal coffins containing the bodies of a naked woman and two men (also nude, but knowing his target audience Tobe thoughtfully obscures their bathing suit areas with objects in the foreground, Austin Powers style). When the ship's escape pod returns to Earth only crewmember Steve Railsback is still alive. Before an autopsy can be performed on the presumed-dead naked people, a government operative with some forbidden love on mind accidentally awakens the woman, who then proceeds to dehydrate him like a night of beer and pretzels and easily escape from what is presumably a highly fortified British military research facility. Before you can say “Kneel before Zod!,” the two male vampires also awaken and escape from the facility, which apparently has less security than your average public high school.

After two separate instances of losing the first proof of the existence of life on other planets, the British military comes to the wise conclusion that maybe they should cut their tea breaks short and actually do an autopsy on the dessicated corpse of the necromantic officer. According to horror movie autopsy rule #773, the corpse comes to life during the autopsy and sucks the titular substance (man, that sounds dirty) right out of the doctor, which reconstitutes the corpse to his full and juicy human state. It turns out that the ramen noodle reconstitution process only lasts for a short time, though, and if they don't get more life force soon the dehydrated zombies explode in a cloud of dust. This is confirmed when a female dehydrated corpse bearing a striking resemblance to Lindsey Lohan is found and tied to an examination table to explode. We can only dream that someone would do that to the real LiLo.

The crack team of fumblers who are for some reason entrusted with the survival of humanity finally come to the part of their bassackwards plan where they think to ask ol' Crazy Eyes Railsback what actually happened on the shuttle. While admittedly it was nice of them to give Railsback a few days to chill and catch up on Knots Landing before they inconvenience him with a debriefing, in retrospect maybe they should have made it a bit more of a priority. Then again, hindsight is 20/20, especially when naked space vampires are running amok. In the debriefing we learn that Mathilde May's boobs have the power to cloud men's minds (a power which, if I'm not mistaken, pretty much every pair of boobs shares) and Steve Railsback, being her first human conquest, has a special connection with her.

Using this special connection, Crazy Eyes learns that the space vampire has begun body-jumping in some vaguely defined, off-screen way and he and the fearless vampire killers track her down her most recent host body, a young woman. He barges into her house and shakes her around a bit before ripping off her dress and shoving his tongue down her throat. Hey, don't hate the player, hate the game. It turns out she's body-jumped again and is now in the body of mental asylum director Patrick Stewart. The film then lines up a dozen sharks end to end and sets them on fire before jumping them, with a scene of Railsback questioning the space girl inside Patrick Stewart, who now speaks with a woman's voice and makes nookie-talk. In a twist that totally hasn't been used in a million other sci-fi stories, we learn the vampire took her shape from Railsback's mental image of the perfect woman (which does raise some questions about why the other two vampires, on encountering an all-male shuttle crew, took the form of men). Then Professor Jean-Luc Xavier himself tells Steve Railsback to “touch me” and the two of them slowly and agonizingly make out, an unholy union which causes disorder in the universe and results in the death of one of the vampire slayers.

On the way back to London in the most exposition-filled helicopter ride ever, our heroes get a call from the Van Helsing of the group who has killed one of the naked space men off-screen and reveals that (shock!) they are fully stakable vampires. Right on cue the bodies of Patrick Stewart and the dead vampire hunter start spewing blood from every orifice to make a floating blood baby. In a scene that manages to be a major special effect that has zero impact on anything in the story, the blood baby turns into naked Mathilde May for one second before splattering to the ground. This causes Railsback to come clean with the fact that while on the shuttle he fell under the spell of the vampire girl and that he was the one who sabotaged the ship. But, wait, the exposition's not over yet (the third act's not going to kick off itself, people). Steve and the gang get a call that there's mayhem on the streets of London because the space girl is the Gatekeeper and Steve Railsback is the Keymaster and a giant vampire spaceship (we'll call it Zuul) has entered Earth's atmosphere and is beaming up souls. Sound familiar to anybody, maybe like a major release that came out the summer before this? Yeah, total Cannonball Run II rip-off.

The big finish has zombies, more swirly blue animated lightning and Mathilde May finally putting on a shirt. There are also a few scenes of chaos on the streets of London as depicted by 20 extras running into each other while pieces of paper blow in the wind and a few metal barrels burn in the background. When society breaks down why is it that we always first take it out on the metal barrels? The remaining male vampire is dispatched with a half-hearted staking and Mathilde May and Steve Railsback get naked and make whoopee in the middle of the soul beam to space. After asking her “What are these feeeelings? Why do I feel so close to you? Needing you?” Steve catches a vampire slaying stick from his buddy and runs the space girl and himself though with it. They disintegrate and their souls are sucked up to space, presumably to start a new race of naked space vampires.