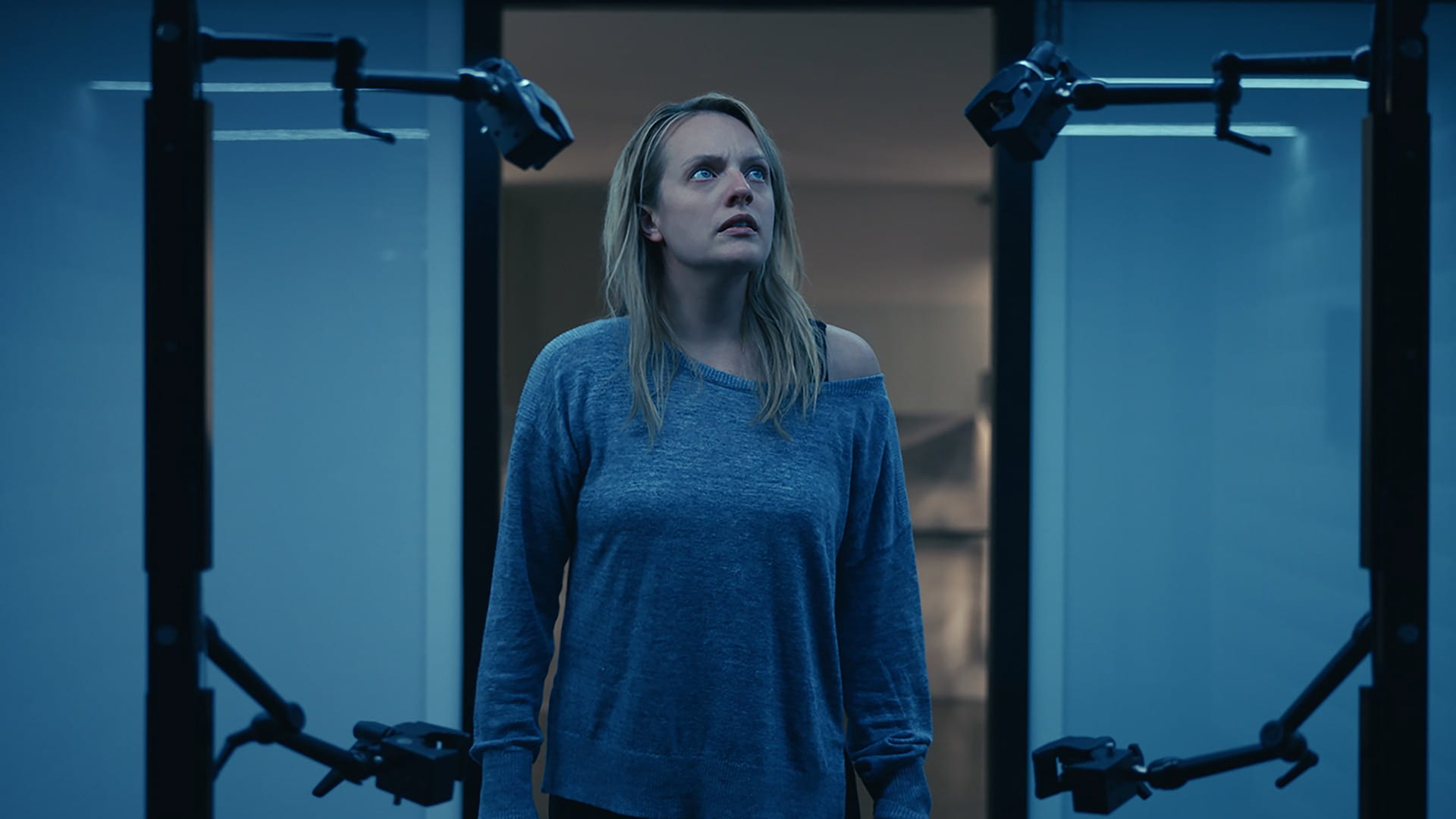 Dead Hand Control and Abuse in The Invisible Man

Disclaimer: The following is an analysis of The Invisible Man (2020) by our mental health correspondent Natalie and our legal correspondent Adam. Unlike the characters in this film, we implore you to seek independent legal and clinical advice and treat our observations as entertainment. Also please watch this film before continuing, as we don’t want to ruin the SURPRISE.

Leigh Whannel’s 2020 incarnation of The Invisible Man uses scifi and horror tropes to illustrate the realities of surviving an abusive relationship. Even the title references the reality of many abusive relationships in that the perpetrator’s behaviors are often invisible to almost everyone but their victim/partner. That’s certainly the case for Cecilia (Elisabeth Moss), as her abusive partner Adrian (Oliver Jackson-Cohen) is seen by most of the world as a brilliant scientist. It isn’t until Cecilia makes her carefully strategized escape from their home that her sister, Emily (Harriet Dyer), starts to see the reality of Adrian’s narcissism and control. Once she has fled, Cecilia is still so frightened of Adrian’s reach that she will barely leave the house or use her laptop camera for fear of him being able to find her.

When Adrian gaslights Cecilia (and the world) into thinking he has ended his life via suicide, she begins to relax. However, even though she cognitively “knows” he is dead, her nervous system clues her into the fact that she is still being watched by him. Her brain and nervous system are in conflict, with the latter in hyperdrive as it senses Adrian is still around her.  Cecilia is not believed, like many abuse victims, and Adrian continues to taunt and harm her from behind the shield of his invisibility bodysuit. As an abusive narcissist, Adrian wants to control what Cecilia does with her time and body. Accordingly he sabotages her job interview and physically assaults a friend who suggests she & Cecilia relax by eating cake together. 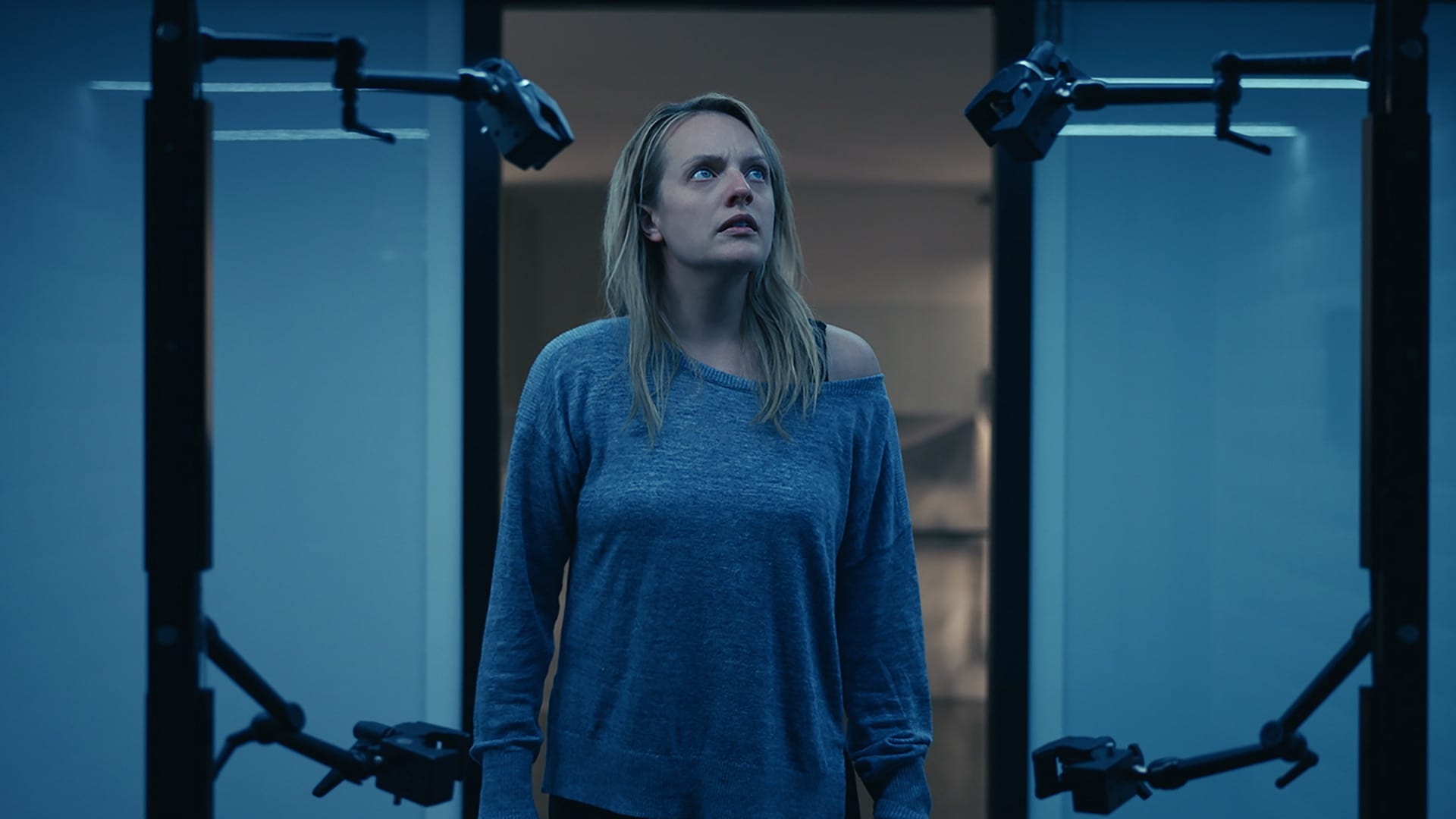 Once Cecilia discovers the bodysuit that allows Adrian to be invisible, she tries to explain everything to her sister. But Adrian murders Emily and Cecilia is framed for it. Cecilia laments that she caused Emily’s death by bringing Adrian into her sister’s life, and it’s common for victims to blame themselves for the abuser’s behavior in this way. Cecilia enacts a plan designed to have Adrian reveal himself to her so she can harm him, and their fight spills out into a hallway. In a literal depiction of what so many abuse victims experience when trying to take legal action against a perpetrator, the cops that come running to restrain Cecilia cannot see her abuser even when he’s right next to them & she’s shouting his location. Instead Adrian has the upper hand over those who are supposed to protect victims like Cecilia, and he disposes of each of the cops with physical violence.

Finally Adrian’s master plan is revealed. He framed his brother Tom for his “kidnapping” and faking his death. Earlier scenes revealed that Tom was another victim of Adrian’s abuse & control throughout his life. In framing his brother, Adrian has played out the classic DARVO tactic used by many abusers - Deny, Attack, Reverse Victim & Offender. On the heels of this, Cecilia decides to seek her own justice. She meets with Adrian and tries to get him to confess to framing his brother & being behind the attacks on her.  He again employs DARVO, telling Cecilia that Tom controlled him. He then tells her, “You’re the only person in the world who gets to see my hands shake. That’s why I need you, Cecilia.” Adrian believes that being allowed to witness his weakness is a gift, and that his “love” for Cecilia is based on his own selfish needs.  It is at this point that Cecilia uses the invisibility bodysuit against Adrian, killing him in a way that looks like a suicide. Like many victims before her, Cecilia had to resort to extreme measures due to the invisibility of the abuse she suffered. 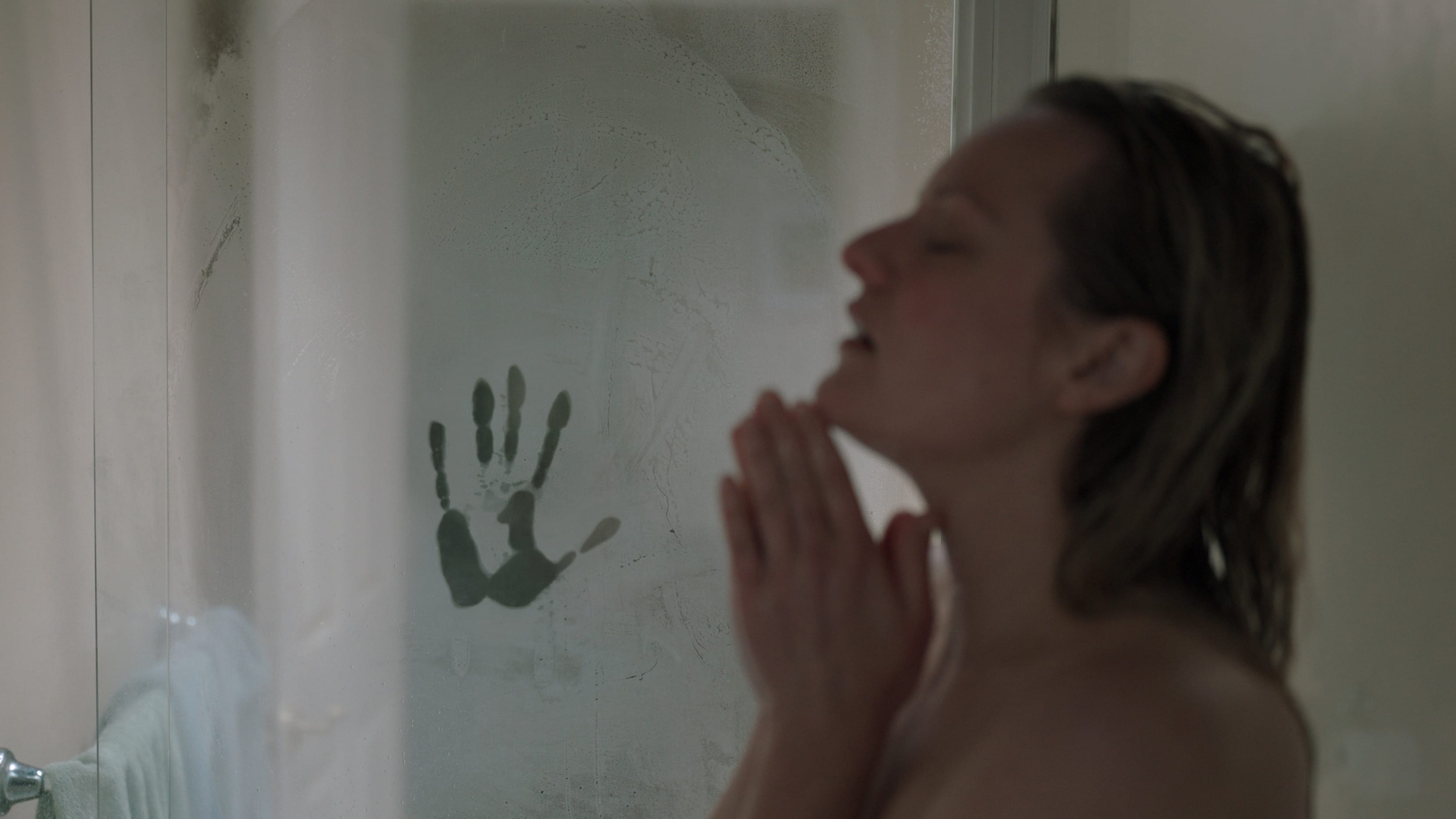 In Extremis: The “Dead Hand” and The Invisible Man

While The Invisible Man reflects many of the realities of an abusive relationship as Natalie’s analysis demonstrates, it sure had a lot of issues with the law. I looked forward to the film after the first trailer when I heard Tom say “per his final wishes, you’re getting five million dollars, contingent of course on the fine print. You can’t be ruled to be mentally incompetent.” Now, to the average person that is just the set up to this gaslight manifesto horror flick; but I began to consider the question, “Can you put that in your will?”

The film takes place in San Francisco, California. which is the law we will be applying. The referenced “dead hand” in my title is a concept in the common law that refers to the ability to control people’s actions from beyond the grave. This is done by a trust or a will that gives someone a gift contingent on their actions. California, like many states, has a rule that a will cannot contain contingencies that violate public policy, e.g. kill someone to get my money. However, what is against public policy is often litigated in the courts.

For example, in the case In re Estate of Max Feinberg the Illinois Supreme Court found that a clause that disinherited grandchildren that married outside the Jewish faith was not void for public policy.(1) The clause was restricted to who they could marry as opposed to discouraging marriage and was therefore accepted. In Canada, a clause in a charitable trust was struck down because it could only be accessed by "a student or pupil to be eligible for a Scholarship shall be a British subject of the White Race and of the Christian religion in its protestant form [in need of financial assistance]".(2) Yikes. The court of appeal held that it is against public policy to find any race or religion as greater than any other in our pluralistic society and used its inherent power to vary the trust. Public policy is defined by statute in California, however I did not find much in the way of test cases.(3)

Unlike in the trailer, the first time Tom meets with Cecilia and her lawyer/sister Emily, the condition to receive the trust is that she is not allowed to commit a crime. This would not be void for public policy as society wants to discourage people from committing crimes; however it is ambiguous as it is unclear if she needs to be found guilty. Since she is seeing an invisible man that she attributes her crimes to, her lawyer could argue insanity/not-criminally responsible as she does not understand the consequences of “her” actions. If she is found not-criminally responsible, she would not have committed a crime and could continue receiving under the trust. 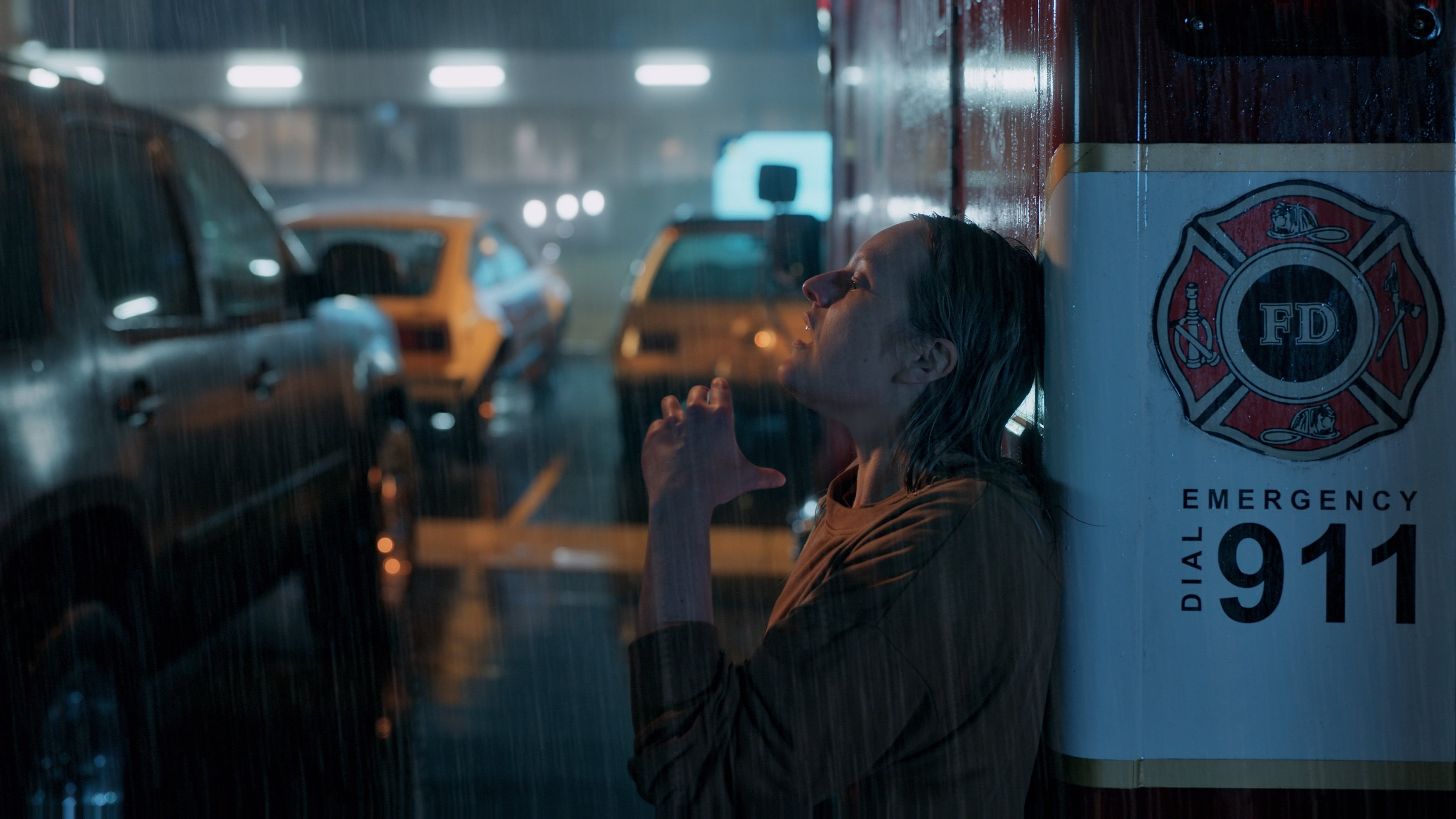 The second time Tom appears he mentions that the trust also specifies she cannot be found mentally incompetent. There is no specific answer for whether this would be found void for public policy. On the dead hand we have the wishes of the deceased, but on the other hand the court may wish to protect against discrimination based on mental capacity and may appoint a power of attorney or guardian on Cecilia’s behalf to administer the money.(4) Either way Tom has a problem - he is not his brother’s lawyer, he is the lawyer to the trust. He owes her a fiduciary duty as she is the trust’s beneficiary. He would be required to pay for her legal fees to litigate whether or not the trust falls to the residue (Adrian’s estate) or if she can still receive under it.

Second, he just committed fraud as he tried to coerce a person who is not mentally competent (actively in a forensic mental health facility) to sign a legal document which would not be binding as she lacks capacity - while acting against his client (Cecilia’s) interest. He probably is unconcerned since he also falsified a death and would have several attempted murder charges. Oh and I do not even have time to discuss the police officer whose daughter was just assaulted by a suspect and yet he was somehow allowed to interrogate her ALONE. That case is going to run into many constitutional challenges for breach of due process. Overall, I liked The Invisible Man a lot, but the law was short-circuiting like an optical suit. 8/10 film, 4/10 legal realism.