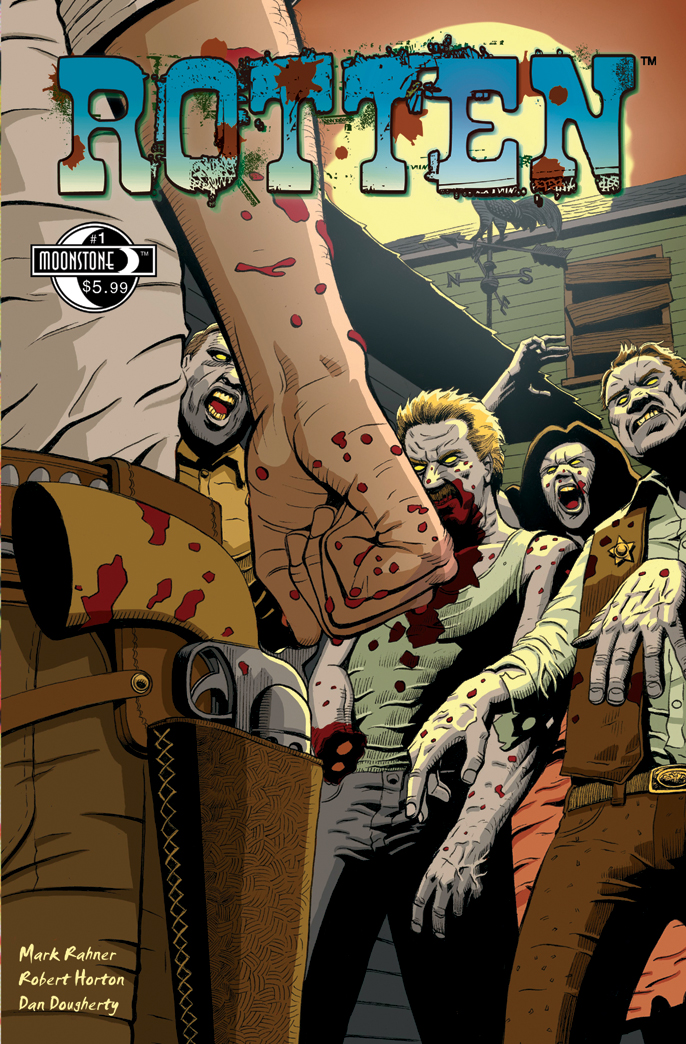 The zombie plague has been re-written over and over again as of late. This time around, Rahner and Horton decided to give the story a spin and set it in the Wild West. The story focuses on a man traveling the west, en route to Tuscon in search for work. He's known only as C.O. Jones; at the start. As he stops for a drink in a run down mining town, his horse is shot out of nowhere and he's beset by an angered townsman. The town of Shimmer has a couple of problems; a heavy handed money man that rules the roost and owns the local mine, and a plague of undead that have started to appear from the depths of said mine. The towns folk have rallied together in the local bar to try and fend of the zombies that shamble in from time to time...and continue to work the mine of course.

"Rotten" starts out pretty standard for a zombie story. with random attacks and scared townsfolk huddled together, fearing to step foot outside. It's a good story with its new set dressing, but overall just standard fare. The first issue weighs in at 52 pages, which can be daunting at first, but it doesn't take long to find out though there's a lot more to the story. There's also some political intrigue as we find out the truth about C.O. Jones and the strange man they discovered dissecting zombies in the hotel. There's some heavy strife on the town already as the face an oppressive mine owner after an attempt to unionize, zombies of unknown origin, and some good old fashioned cowboy ass kicking. There are also some good twists packed in which caught me off guard and left me pretty excited for more in the on-going series.

If you're looking for something new in your zombie addiction, you can't go wrong with "Rotten". There's plenty of familiar territory to feel at home and some intrigue to keep it interesting.

The new book should be hitting shelves in three weeks from Moonstonebooks.