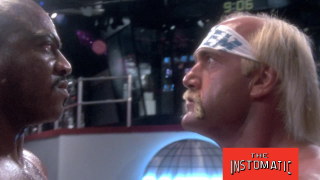 The Instomatic Episode 16 - "No Holds Barred"

People hate reading, it's a fact. Unless of course the words are written by a sarcastic little scamp in New Jersey and they include images of giant apes who run the world. Luckily for the world I'm here and there's also these new "Planet of the Apes" comic books which tell a lovely story that takes place before the original 1968 classic. You're welcome world.

David Koepp has been brought in to do major work on the script of "Men in Black III" which apparently is a bit of a shit show right now. Apparently the original script had a full on hardcore sex scene between Will Smith and Tommy Lee Jones. Rumor has it it actually called for close ups of penetration and everything. Shocking. Oh I'm kidding there was just some light necking and I guess that's staying in.

Sometimes you read the description of a film and you just say out loud on the bus "Yes, this makes sense!" Then the people on the bus look at you weird and you lose your bus pass rights. But it's worth it because the world is going to get "Black River" which stars former wrestler Hulk Hogan as a serial killer. Need more? "Diamond" Dallas Page is coming along for the ride! Just feels right doesn't it?

I've got to say, this new film from Canada titled "The Corridor" looks pretty freakin good. I know! From Canada of all places. Little America did something good that didn't include maple syrup! The movie focuses around a group of friends who reunite after loosing touch for a weekend in the woods. A strange happening though has them turning on each other and questioning reality. And drinking a lot of maple syrup I'm guessing.