In its 3rd week, "Paranormal Activity" -- shot for 18 cents on a crank-operated super 8 in an abandoned house (probably foreclosed upon!) -- has tallied over $7 million at 159 theaters. That, as they say in the business, is absurd. Per theater, we're talking over $44,000, which is just about three times the film's actual budget (Wikipedia says $15,000, but obviously, don't quote me on that). Those are tremendous numbers by any measure, but for reference, let's talk benchmarks: last week, the new Coen Brothers film "A Serious Man" did about $42k per theater in its opening weekend (down to a measly $22k this week); in its record opening weekend of $150 mil, "The Dark Knight" did over $36k per screen; with a quick scan, the best per theater I could find for the year, at $57k, were for "Capitalism: A Love Story," which opened on only four screens; finally, this week's top film, "Couples Retreat" did about $12k per theater.

Now it's time to make the monstrously obvious comparison. "Paranormal Activity" shares an inordinate amount of similarities with another small horror film that blew up huge ten years ago this past July. That film, of course, was "The Blair Witch Project." Picked up by Artisan out of the 1999 Sundance Film Festival, "The Blair Witch Project" has become a case study in indie success. It did so by running up a domestic box office gross of $140 million on a budget of $60,000. Rather than run down the whole story, let's go to a side-by-side comparison of "Blair Witch" and "Paranormal Acitivity" at the box. 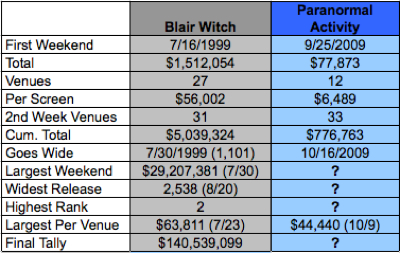 The one key difference between the lives of these two films thus far is that Paramount -- who eventually ended up handling the "Paranormal Activity" distribution -- originally intended to have the filmmakers re-shoot the film on a bigger budget. Instead, they've begun testing the waters for the original in theaters around the country, and the response has been so positive that they will officially be rolling it out to a wide audience next week. "Blair Witch" on the other hand, was seen as a potential breakout from day one, and Artisan made sure a release narrative was crafted around the film. This effort, which included things like websites that today are standard operating procedure, created a fever pitch of anticipation and contributed directly to massive early returns.

"Paranormal Activity"'s own story is really just beginning, but considering the road that the film has walked, it's already a refreshing success. It will be interesting to see how Paramount plays its hand from here on out. We're coming up on Halloween, which has been "Saw" territory for the last several years. But if "Activity" follows the "Blair Witch" path -- that film went to 1,100 theaters in week three, before opening up to over 2,100 in week 4 and 2,400 in week 5 -- it could be looking at a Halloween showdown with Jigsaw. There's also the question of promotion. Will we see some massive media blitz, something that frankly might counteract the film's "cult" cliche, or will Paramount hang back and really let this thing grow organically?

In other box office news, "Zombieland' had a second strong week, as we discussed on this week's podcast episode. To get the full scoop on that, and the rest of the horror releases for this year, check out the Horrors at the Box spreadsheet. Next up, "The Stepfather," the first PG-13 release since May.