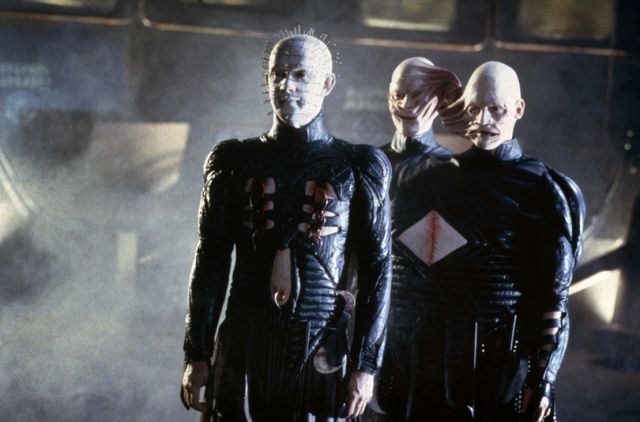 Over at BGH headquarters we have found ourselves in the midst of Pinhead's pain and blood filled world. Pain seems to be the operative word for this retrospective. The BGH New Class tackled Hellraiser IV: Bloodline which was so crazy that writer Ben wanred us of the insanity we were about to step into while live tweeting. Picture a film set in space but also nodding to a life wearing powdered wigs. Add a plot to that idea and the movie essentially takes form; oh, and don't forget to take any logic out. We did manage to survive this week due to the love and support of BGH followers. Here were the highlights of the night.

The ever present and powerful Den Mother, Sophie, got us all whipped into shape.

Spencer was being warned by Netflix to not continue.

"Are you sure you did not mean Bloodline, starring Kyle Chandler and Linda Cardellini?" -- Netflix to me, right now. Sadly, no #TweetWithBGH

Here I come right out of the gate ready to attack the poor actors in the movie.

Speaking of actors, Sophie pointed out that the fantastic Adam Scott was in it. This gave us all a shred of hope.

Spoiler-Alert: Adam Scott is going to be in this movie. This night just got sexier. #TweetWithBGH

The movie started in space but instantly jumped back to the 1800's where Spencer had to point out the food issues.

She just NOW saw the worm cake? I don't know about yall, but the first thing I do when I sit down to dinner is look for cake #TweetWithBGH

Apparently the mystical box that ressurrects and kills Pinhead was made by a white male.

When I was watching part one of #Hellraiser I definitely thought "Hmm, I bet this box came from a man in a powdered wig." #TweetWithBGH

Back to actors, we didn't forget to mention the lovely work from a Nightmare on Elm Street alumni.

Acting discussion was definitely the theme as Spencer illuminated what we were all thinking.

Clearly I couldn't handle what was really happening in the movie.

Does anyone else think John's chest is hairier than expected? Yup. This what I'm focusing on. #TweetWithBGH #HellraiserIV

By the end of the movie none of us knew what was really happening.

Why does almost every scene change leave me feeling like we are missing a lot of scenes in between? #TweetWithBGH

Sophie made sure to correlate the event of the night with the VMA's.

Again, the ending didn't even wrap up the right way.

Can anyone explain to me what happened in the last, like, fifteen minutes of that movie #TweetWithBGH #Welp

The ending involved an explosion of Pinhead. This did not impress me though since I saw a better one as a child.

Still not as great of an ending villain explosion as Hocus Pocus. #TweetWithBGH #HellraiserIV

Overall we had a great time as always! We have to give Ben props here because he watches these movies alone first to do the written reviews each week. We at least get to watch them all together and have the support. Make sure to give Ben the support he needs by reading his reviews every Friday, and make sure to check back in with us next Sunday for the next Hellraiser film.