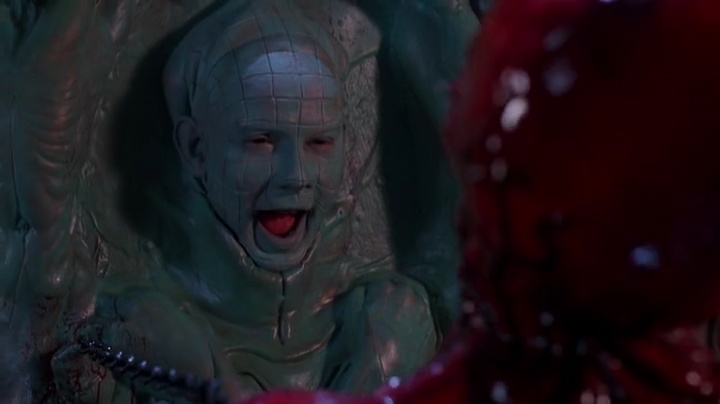 Welcome to "BGH The New Class" where the young blood of Bloody Good Horror takes the internet. Heading into week three of Ben's reviews of the Hellraiser franchise, Sophie, Spencer, and myself jumped onto Twitter with the hash tag "TweetWithBGH" at the ready during a viewing of Hellraiser 3: Hell on Earth. Surprisingly the title of this iteration was very fitting to the real world experience of watching part three in the adventures of Pinhead and his never ending need to dominate the earth. Here were some of the highlights of this live "hell on Twitter" experience:

Spencer kicked us off with a comparison to 1987's Broadcast News. You decide who fits into the Joan Cusack, Holly Hunter, and William Hurt roles.

T-minus 3 minutes! This is how I feel every week just before we #TweetWithBGH https://t.co/d2ihpQRYkt

As always, I'm more focused on what people are wearing/look like rather than the actual plot.

That nurse is wearing a fake wig. Just saying. #TweetWithBGH

Thankfully Sophie had a good way to tie this all in.

@benecker @evanslead This feels like a perfect time to mention that I know the costume director for this movie! #TweetWithBGH

Being the twins that they are, Sophie and Evan also jumped at the chance to complain about the random settings of this movie.

THERE'S A FANCY RESTAURANT ATTACHED TO THIS RAVE CLUB?!? Yeah, see ya #Hellraiser3. We're in a fight now. #TweetWithBGH

IS THIS RESTAURANT ATTACHED TO THAT NIGHTCLUB?! I AM SO CONFUSED!!! #TweetWithBGH

Spencer had found a new sense of entitlement within the story.

Unlike Elliott, I demand that everyone refers to me as Capt. Spencer #TweetWithBGH

Of course when the all out murder spree took place at the dance club, I was quick to find a solution.

Just call Buffy to take care of this. She's probably over at The Bronze right next door to the Boiler Room. #TweetWithBGH

Captain Spencer, in his infinite wisdom, brought in a real world example to back up this Hell on Earth.

Oh my gosh. If Joey getting tortured here is the origin story for Mankind I'll be so stoked. #TweetWithBGH @MarkBGH pic.twitter.com/kgbPnAXR30

Even when the movie was about to off the final girl, Sophie managed to call out what we were all thinking (especially Mark).

By the movie's end, all three of us had varied responses.

But truth be told, that was not the worst horror movie I've seen this year. #TweetWithBGH

This movie was so bad that Regina George felt personally victimized by it. #TweetWithBGH #Hellraiser3 @bghorror

We managed to survive this slump in the life and times of Pinhead and his "Cinna Bite" buddies, but can we get through the rest of the franchise? Watching every Sunday and following all of us on Twitter will definitely keep us striving and thriving for that goal. Reading Ben's weekly reviews on Friday's would also keep our heads above the water. The sexy water. (Cause everything in these movies is sexy. Right?)