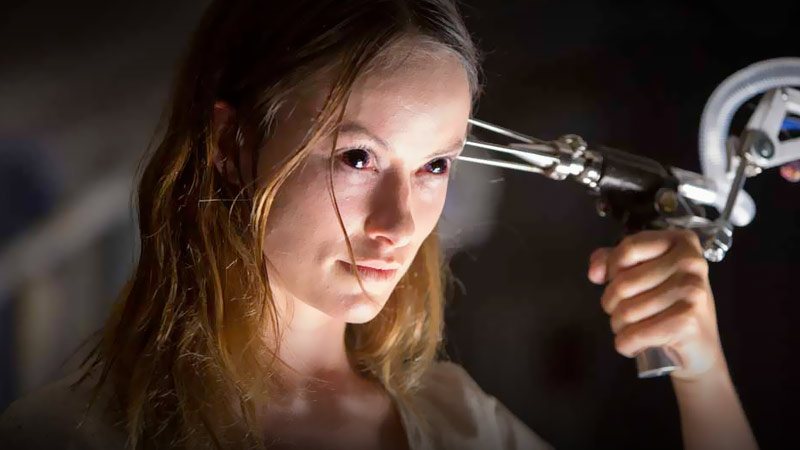 Something about this year certainly lent itself to horror comedies. I don't know, maybe it was fiction doing its best to outpace the absurdity or real life horrors. Regardless, Deathgasm had gained some buzz, but I went into it not knowing quite what to expect, other than it involving death metal somehow. I was pleasantly surprised; the film strikes a pretty ideal balance between comedy, horror, gore, and heart.

This was a real hit or miss year for Eli Roth with me. Literally. There was one hit and one miss. Green Inferno fell flat for me, and I honestly wasn't expecting much from Knock Knock. I don't know how much of my appreciation for the film can be rested on the dependable yet underrated shoulders of Keanu Reeves, but it doesn't really matter, because I ended up thoroughly enjoying the movie. Roth's take on the subject matter is a bit anachronistic, but in the end I feel that that's okay and actually leads to the film raising some interesting questions. Beyond that, the film is also just a wonderful slice of home invasion cinema with a few interesting twists thrown into the formula.

We continue with the theme of films that surprised me this year. I went into Spring knowing nothing about it but its title, and, honestly, I think that the film is strongest in this context. I don't know if it would have been as effective if I hadn't been assuming that it was just going to be a romantic dramady after the first 15 or so minutes. Given that, I am curious to see how it holds up for me on repeat viewing. In the interim, I think it's a wonderful film that does some intriguing things with conventions of the horror genre, even though I do have some issues with the manner in which the ending of the film plays out.

Throwback films abound in the horror genre right now. Everything that's old is new again. It can get a bit overbearing at times, even for those of us that are being catered to. So, the fact that The Final Girls does such a stellar job at being the meta send-up of 80s slasher films that it does is amazing. And it does it while also managing to have an incredibly strong emotional core. All the actors are on point and hilarious here, and the film has its fair share of quotable lines. The PG13 rating in the slasher film setting makes things feel a bit odd and tv movie-ish at times, but the film succeeds in spite of that potential setback.

An instant holiday horror classic. First Trick r Treat and now this; I'd love to see Michael Dougherty do a horror film for each and every holiday at this point (although I also want him to get Trick r Treat 2 out at some point. He's going to be a busy man in this imaginary world I've built). The film brings a pitch perfect tonal balance to the table that certainly merits the comparisons to Gremlins that it's gotten. It's equal parts hilarious and horrific and I even appreciate the streak of sadism that Dougherty imbues it with. This is definitely going to be a staple of the post-Halloween/pre-Christmas period.

On the surface there's not a lot going on in Bone Tomahawk. Some guys go on a trip to save some people and bad bad things happen. But there are layers of this movie that really burrowed under my skin. The recurring theme of denied fulfillment is at the top of that list. There are certain conventions that most of us are indoctrinated to expect while watching movies. For instance, if we are specifically shown that a character picks up an item, we automatically assume that they're going to use that item at a pivotal moment later in the movie. Much of what's horrific about Bone Tomahawk is that the movie basically sits there saying, "You fool, real life doesn't work that way. I'm going to show you how it actually works." The answer is, of course, horrific.

This movie is possibly the most Gothic literary thing EVER. When most people think of Gothic lit they turn to stuff like the Universal and Hammer monster films based on the works, but, ever the auteur, Guillermo del Toro really went back to the works of the late 1800s for his inspiration here. Presenting his story without that lens of Lugosi, Karloff, Lee, Kushing, Price and the rest that we're all used to viewing gothic tropes through certainly led to confusion about what the film is, and I find that a bit tragic. Crimson Peak is a wonderful, gorgeous work of romantic gothic fiction, and I'm excited that it's one of what seems to be more and more films using horror elements for more than just jump scares.

3. What We Do In The Shadows

I absolutely love this movie. It's just so joyously hilarious that I find myself grinning ear to ear as a I watch it. The humor here is a perfect blend of referential and original, and the characters are insanely endearing (which is not an easy thing to accomplish with this level of absurdity, rather than crossing over annoying). As I said back at #10, this certainly seemed to be the year for horror comedies, and What We Do In The Shadows was at the head of the pack on that front, in my opinion.

My top two were neck and neck for a long time. There's so much that It Follows does exceedingly well. From the constant overwhelming dread, to the score, to the performances, to the subtext, the film is amazing. This is also what it looks like when filmmakers referential homage right. It Follows owes so much to Carpenter and Craven and tons of 70s and 80s horror, but it would be difficult to try to claim that it's anything but a revelation. It's certainly one of the best horror films of the last decade, and would have been my #1 pick if not for a few odd choices made in the latter third of the film and the existence of...

I feel that every moment in this movie is perfect. For much of the movie the audience is so in the dark about exactly how things are going to pan out, but the unshakable, claustrophobic sense of foreboding indicates that, whatever happens, it's going to be tragic. There's an orchestrated quality to what Alex Garland creates with this film that pervades each scene. Even seemingly superfluous moments, such as the dancing scene, somehow feed into the wave of paranoid momentum that Garland obviously wants us to be swept up in. The film is also shot beautifully and each of the actors gives a stellar performance. In addition to all that, there's layers of subtext to dive into for those who choose to do so.