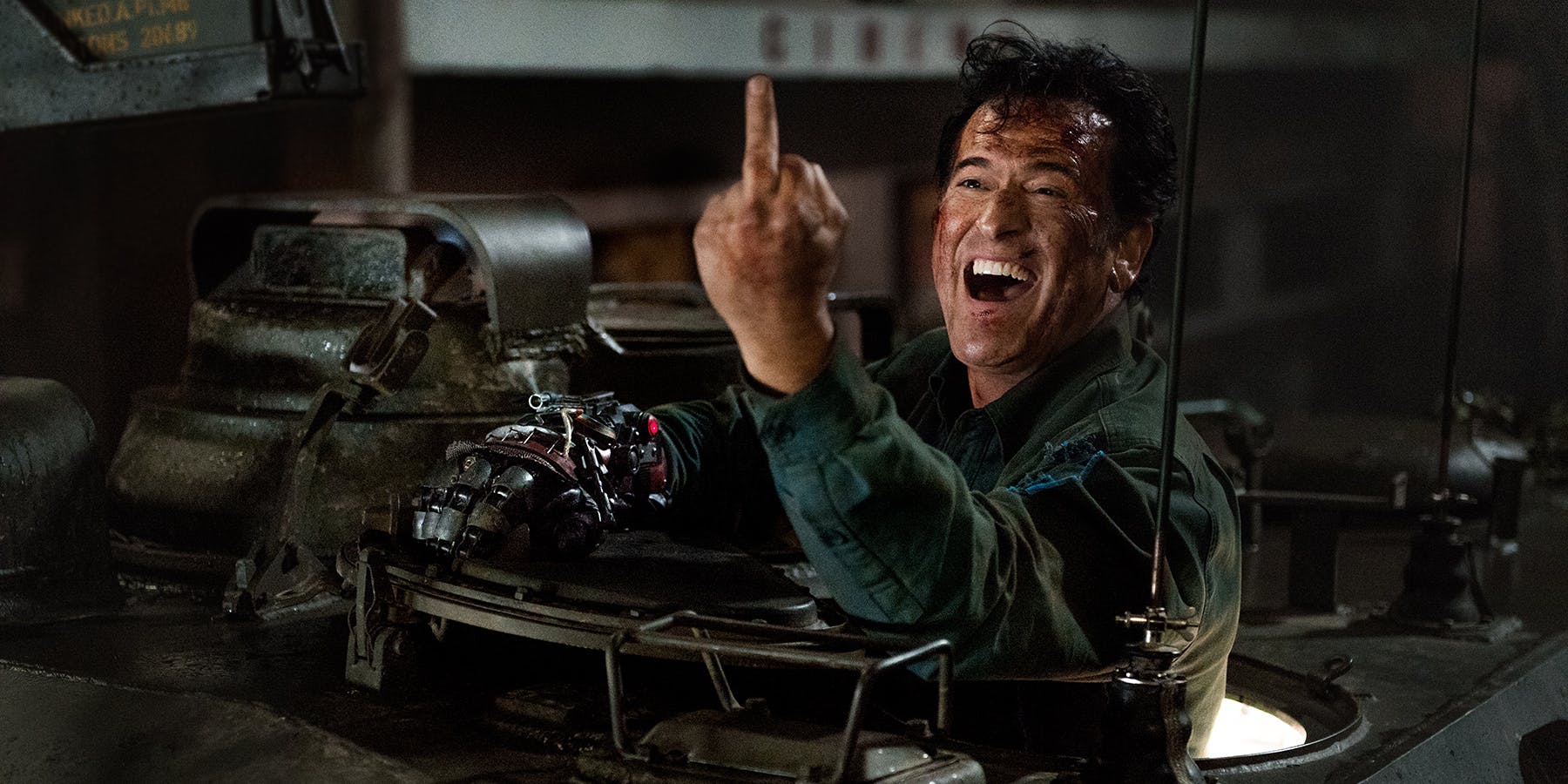 With less than a half a season left to go, Ash vs. Evil Dead found itself in a predicament that too many good shows have encountered. Suddenly they could be counted among the list of shows which have been cancelled mid-run. Starz announced they would be pulling the plug on Ash despite the show’s relatively solid ratings. And so, with only two episodes left to go this season, the show was forced to barrel on towards an ending that had suddenly become its series finale.

It was with trepidation that fans sat down to watch this last episode. The end of the previous episode had seen the small town of Elk Grove, MI effectively become ground zero for what was starting to look an awful lot like an apocalypse. Ruby and her body-stealing pal had been quickly dispatched by the Dark Ones, but now Ash and company had the Dark Ones to contend with; not to mention Kelly was still a lifeless corpse in our present while her soul fought for her life in the hell dimension.

Despite its posture as an episode that had taken on a great deal more weight than it was originally written to carry, “The Mettle of Man” plays nicely as a goodbye to the show and to a character that fans love fiercely. We get to see each member of our favorite band of misfits fight and sacrifice bravely; Brandy has to battle an anthropomorphized phone that is inhabited by a deadite version of her Mom, Pablo saves a little girl, and Kelly gets to take out some of her righteous anger with a really big gun. Meanwhile Ash, who is presented in the show’s premier as a washed up, selfish degenerate, sacrifices himself to save Brandy, Pablo, and Kelly, along with the rest of the world, almost as though the arch has accidentally come full circle. He graduates to a much heftier boomstick (namely a tank cannon) and takes on Kandar itself.

The episode is a strong one, and it pulls all the right heartstrings, but I think for some fans what will really make or break this episode, and the end of this franchise, will be the epilogue. After being trapped in the tank by Kandar’s falling corpse, Ash is dragged, unconscious from the wreckage and put into what looks like a makeshift coffin by unseen actors. When he wakes up, it appears to be years later. Ash has gone stylishly and cartoonishly gray-ish in a way that only Bruce Campbell could pull off. There is an android woman waiting for him with a souped up Delta and very little in the way of details. We know we have time jumped but we don’t know the state of humanity or whether the rest of the gang is around (but the world appears to be toast).

It is hard to objectively review or talk about this episode, and so from here on out, I’m not going to. I felt myself coming away from this ending wanting desperately to see what this new world would be like and where Ash would fit in it, but also feeling completely content with this as an ending. Let me be clear, I know that not everyone is going to feel this way. I think this episode accidentally created space for fans to grieve the end of a franchise and say goodbye to a character, while allowing us to believe that though everything is different, nothing has really changed. The world as we know it may be over, but Ash is going to keep fighting, like he always does. He has taken two ill-fated trips to a quaint Tennessee cabin, he has travelled back to the MIddle Ages and fought dancing skeletons, he has fought Evil in high-school gymnasiums, sperm banks, and his own mind. And he will keep fighting.