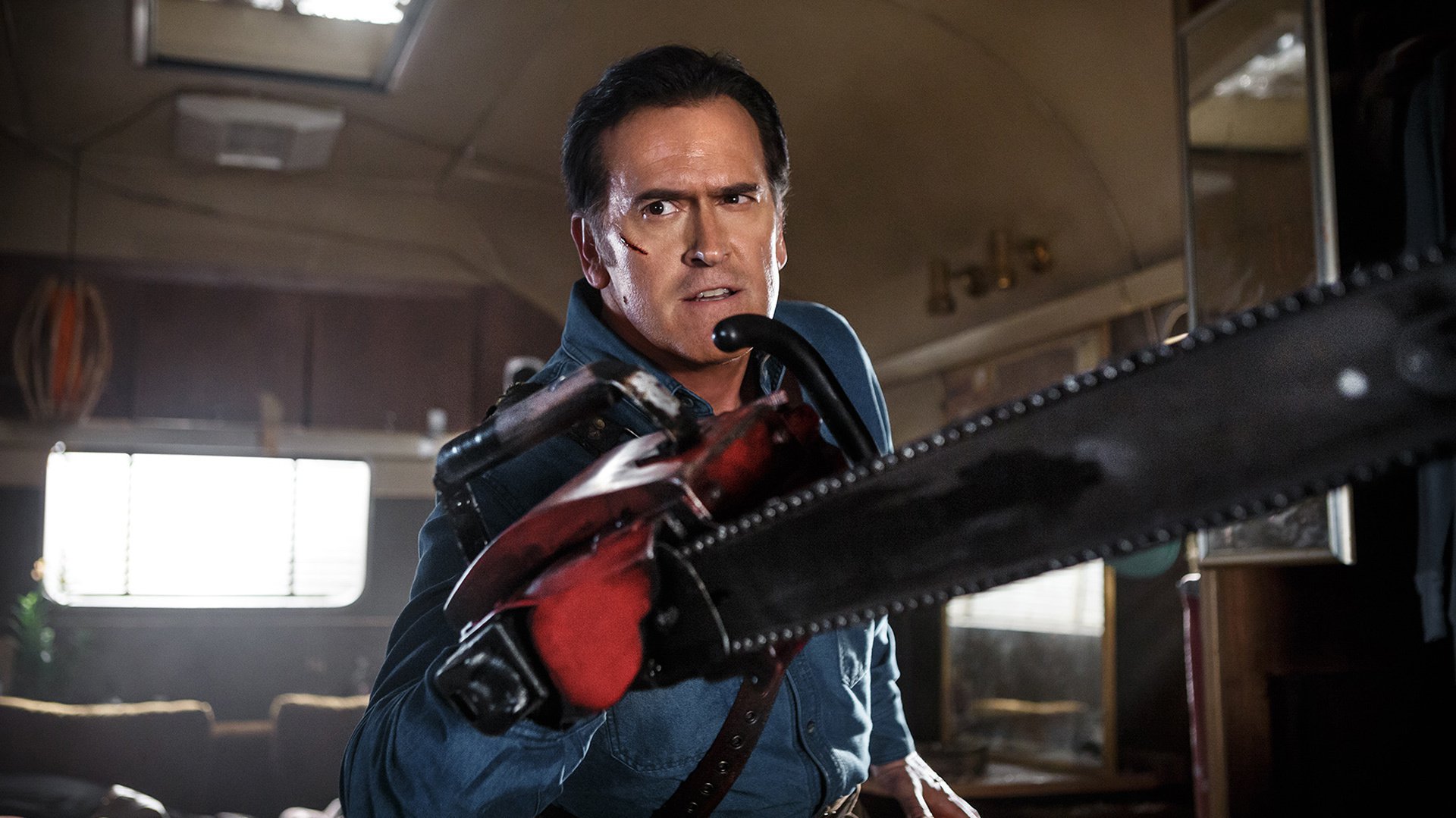 This year has seen more than a few transformations of movies into TV shows. From Limitless and Minority Report to Scream, there have been a dearth of adaptations from the silver screen and many of them suffer in the ratings. Audiences and filmmakers know that recreating or retelling a well-worn story is hard enough when the format stays the same, but the challenges seem to multiply when the medium shifts. Not only do you typically lose the actors and creators that made the story what it was to begin with, you also have a drastic change in pacing and storytelling that some writers seem to think they can overcome, only to fall flat on their face when they reach the first hurdle.

But from the start, Starz’s original Ash vs. Evil Dead looked like it could be a winner. Not only does it follow on the heels of a very successful remake (that I am on record as loving) but it returns Bruce Campbell to his role as hammy hunk Ash Williams, and reunites him with the genius behind it all, Sam Raimi. With this show, fans were getting what many wanted from the remake all along, and when it premiered on Halloween, the moment of truth had finally come.

Ash vs. Evil Dead picks up thirty years after the fateful night when Ash and his friends took a trip to a secluded cabin in the woods (although whether that’s thirty years after the first or second trip, is unclear) and has just about everything one might have hoped for. Catching up with a beloved character thirty years down the road could be a challenge for any writer, but the audience’s reintroduction to Ash is anything but stilted. Not only is Ash back, but so is his big yellow car, chainsaw, and of course his boom stick. After our dashing hero decides to read parts of the Necronomicon aloud while under the influence in order to impress a date, the Deadites are back and looking for revenge.

In the style of the movies that came before (particularly the latter two) Ash vs. Evil Dead gets started quickly and ramps up the craziness without wasting much time. We get Deadites and racing shots through the woods in the first half of the episode as well as a fantastic fight scene where Ash is attacked by a possessed doll in the store room that falls right in line with the skeleton soldiers in Army of Darkness. When Ash, with the help of two young fellow employees, finally comes face to face with the titular Evil Dead the ensuing blood bath is both goofy and gory in perfect measure.

This show does very little to change the overall formula, and that puts it in position to continue to be successful. The Deadites still rely heavily on the original aesthetic, without falling into the common modern pitfall of way overdoing the visuals when remaking a story (*cough* Teenage Mutant Ninja Turtles *cough*) and the Necronomicon looks about the same as it always did. From start to finish, “El Jeffe” has an exuberance about it that was infectious. There are references to the films left and right, and action that just won’t quit. I don’t know about you, but I think we’re right on track to have a groovy season.