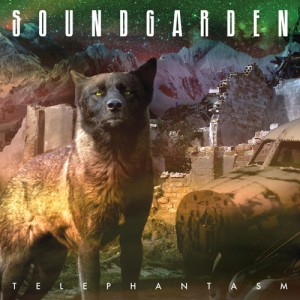 Normally, greatest hits albums, whether they're masked as "career retrospectives" or some other convoluted term, go unnoticed by me. I remember coming to the conclusion at a younger age that most greatest hits albums are simply shams by record labels to perpetuate sales of a band that might have gone stale. This was the principle reason that Soundgarden's "A-Sides" release in 1997 garnered no interest from me, even though it contained the previously unreleased (and pretty solid) track "Bleed Together."

With that in mind, allow me to present "Telephantasm," the two-disc career spanning collection from Soundgarden, one in the handful of bands that really made me love music in the first place.

There's something about this collection that makes it stand out, and I think that stems from which songs were selected to be a part of it. The willingness to combine both the underground and mainstream chapters of Soundgarden’s career, and in the process eschew a more radio-centric collection, serves to better capture the entire arc. It took guts to include a song like “Big Dumb Sex” on “Telephantasm,” but the story of Soundgarden in that moment in 1990 can’t be fully related without it. The compilation does a fantastic job of bringing together stand alone moments when the band was at their most unique, and the kind of radio superhits that cemented their legacy.

Furthermore, the songs from the less-than-moneyed recording days when Soundgarden was a little known band on forever-struggling Sub Pop Records are presented without any sort of remastering, and that’s critical to “Telephantasm’s” authenticity. Songs like “All Your Lies” and “Hunted Down” serve as snapshots of the band not just during that musical phase of their careers, but as references to their career progress to that point as a whole. Not to mention the kind of space that grunge was operating in during the mid to late 80’s.

There are a handful of songs that are rightfully included on the compilation, but are represented by alternative versions from the ones made famous. The hypnotic and infectious “Flower” is brought to bear with a throatier, deliciously bass-y BBC Session cut, and “Room A Thousand Years Wide” is present with an echoed, distorted “single” version that never saw the light of day. Throw in the expected hits, a couple live versions and the SNL performance of “Pretty Noose,” and you have a full experience. Worth noting is the spooky, hollow version of “Blow Up the Outside World,” performed for MTV, that gives the song a whole layer it didn’t have on record.

From a personal standpoint, I love it that “Telephantasm” keeps the three song set of “Rusty Cage,” “Outshined,” and “Slaves and Bulldozers” intact and in order. Those three songs in conjunction illustrate the three best parts of Soundgarden’s songwriting, from radio friendly riff-rocking to down and dirty heavy metal to grunge that’s dragged through the sludge and comes out broken on the other side.

Two nice additions for fans and collectors alike are the pummeling “Birth Ritual” and the never released outtake “Black Rain,” so if nothing else you can fill out gaps in your collection.

To be fair, and in talking with other Soundgarden fans, we all have personal favorites that we feel are absent from “Telephantasm,” (for myself, “No Attention,”) but the one that we are all in agreement is an unforgivable omission is “Gun” off of “Louder Than Love.” How that dire, thundering piece of grunge metal craftsmanship didn’t make the cut is beyond our collective ken. As a footnote, nothing from the very rare “SOMMS” EP made the cut, either.

“Telephantasm” is a nearly peerless chronicle of, for my money, the best grunge band who ever lived. If you have holes in your Soundgarden collection, or want to be familiar with their entire catalogue at a glance, pick this up.

Despite their obvious multi-platinum and worldwide success, Soundgarden will always be shadowed with a hint of “what could have happened?” In particular, what could have happened if “Badmotorfinger” hadn’t been released the same month as “Nevermind?” There are persistent rumors and reports (in “Rolling Stone” for one,) that Soundgarden will reunite with a new album and a new tour. I sometimes find these reunions altogether hokey or contrived, but not in this case. As the last grunge band standing with their famous lineup conceivably intact, I would be very curious to see what the band comes up with now that they have nothing to prove and no larger act looming over their legacy.