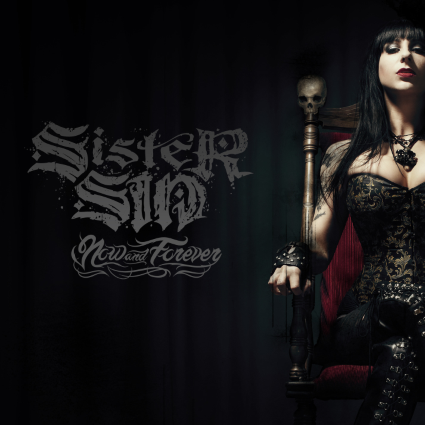 Not so long ago on these very pages, I remember thinking that Sister Sin’s “True Sound of the Underground” was far too calculating for its own good, attempting to capitalize on the broad and easy target of teenage angst without really offering a solution or an alternative. It was a highly marketable album, but one that failed resonate for anyone of college age or greater.

So it was with appropriate anxiety that I delved into the latest offering of Sister Sin, this time titled “Now and Forever,” if nothing else a title that offers a less saccharine promise of the content within. There is no denying the competency of Sister Sin as musicians; if they could simply show some wherewithal and a little forthrightness, it was more than possible that “Now and Forever” could overshadow the band’s previous efforts and become the cornerstone of their legacy.

To cut to the verdict quickly, “Now and Forever” is halfway there. With only a couple exceptions, there aren’t the vague calls to arms that revel in misguided anger like there were on “True Sound of the Underground,” which immediately lends the album a more mature and thoughtful appeal. Certainly, there’s a song called “The Fight Song” (you can guess what that’s about,) which throws back to the band’s previous efforts, but on the whole, pieces of this nature are much fewer and farther between.

Sister Sin has musically evolved from the simplistic chords and drum cadences of their last album to…well, more of the same, but this time it’s much better orchestrated and arranged. The production sounds more full and robust, giving “Now and Forever” a sort of Motley Crue Jr affect, which could be either a compliment or an insult depending on who you are (and which era of the Crue you’re talking about.) A song like “Hearts of Cold” might have been impossible on “True Sound” or the band’s two albums prior to that, but works here as a result of the harmonious layering and well-placed solos.

It’s probably just an impression on my part and likely not a reality, but this album feels better paced and more thoughtfully assembled than Sister Sin’s previous full-length effort. Where that album went to the wall on each and every song, “Now and Forever” has a better sense of the moment, which leads to a rousing fist-pumper like “The Chosen Few” secretly being the best track. It might get buried amidst the pomp and vigor of the other songs, but don’t miss it if you pick the album up.

Still, I did say “halfway there,” didn’t I? Yes, “Now and Forever” is only halfway where the band wants to be. There are still too many moments where Sister Sin gets lost in the repetition of their message. The constant need to lyrically be angry about everything and encourage anarchistic rebellion is all well and good, and has helped dozens of bands over the years in the quest for relevancy, but even a band thoroughly flooded with that message like Rage Against the Machine would turn the lens on different specific causes of their anger (or cover an Afrika Bambaataa song, but that’s neither here nor there.) Sister Sin still gets tied up in their basic routine of dissension, and it means the band’s maturation, while evident, has only come so far.

As a corollary effect, the music has also only matured accordingly. While the musicians themselves are still talented and capable, and Liv Sin tirelessly offers one heartfelt, gravel-laced exhortation after another, Sister Sin hasn’t pushed the musical issue and expanded into unfamiliar territory. It’s absolutely true that “Now and Forever” is the band’s best produced and most well-arranged album to date, but it’s also true that it’s a better production of the same basic thing.

As a quick aside, I would be remiss if I didn’t mention that “Running Low” reminds me a lot of Bonnie Tyler’s “I Need a Hero.” It took me days to figure out what it reminded me of, and it seems impossible, but it’s true. Take that for what you will.

Let me be clear. “Now and Forever” is Sister Sin’s best album so far. It has greater depth and musical orchestration than any of their previous efforts and fans will just go bonkers for it. Still, Halestorm may have beaten Sister Sin to the punch this year, and those who are looking for the latter band to take the next step will only be partially rewarded. The album is certainly “Now,” but I’m much less certain about the possibility of “Forever.”