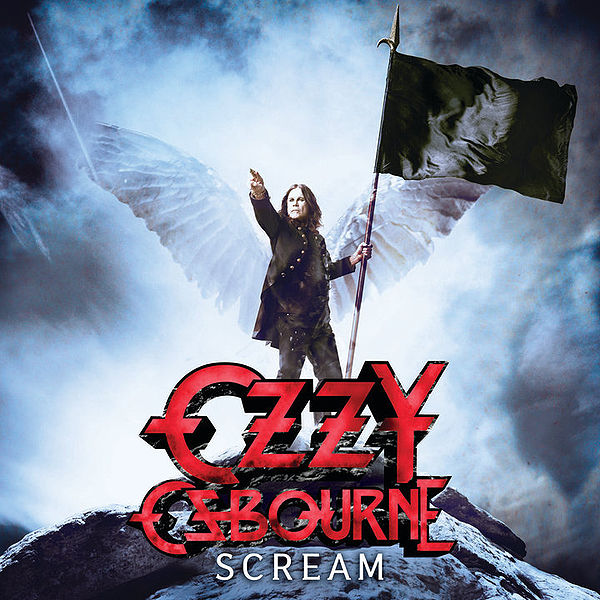 I'm faced with another possibly ill-advised Ozzy album. Honestly, I'm not sure "Scream" should exist. In truth though, who am I, who are any of us, to tell the father of heavy metal as we know it that he should stop? So, "Scream."

Similar to Danzig's recent release, "Scream" leaves me with mixed feelings. Ozzy recruited practically a whole new band, beginning with guitarist Gus G in favor of longtime Ozzy conspirator Zakk Wylde. At this point in his career, I don't know that Zakk would bring anything new to the table for Ozzy, so this was likely an attempt to find some new niche, or recreate the kind of high-octane virtuosity that so characterized the Randy Rhoads era. To further the aim of finding a more contemporary sound, Ozzy retained the services of Rob Zombie alumni Blasko and Tommy Clufetos to fill out the rhythm section. (Parenthetically, whatever happened to Jake E. Lee?)

The end result has a lot of Zombie-esque flavor, as songs like "Let Me Hear You Scream," “Diggin’ Me Down” and "Let it Die" positively drip with the kind of pedal-down chugging that made "Hellbilly Deluxe" such a hit. What comes as no surprise is that Rob Zombie would have been better served singing these songs as a result. Ozzy can’t (and never could,) demonstrate the kind of gravel-laced vocal menace that it takes to pound out a song at this low range (for further evidence, see “Iron Head” on Zombie’s “Sinister Urge.”)

It comes as no small irony that “Scream”’s most egregious crime – its inability to sound idiomatically like an Ozzy Osbourne album – is a product of Ozzy’s greatest modern asset. Through being a gracious man who remembers his friends and gives thanks when he can (no one except Tony Iommi has ever said otherwise,) Ozzy has a singular ability to attract any number of talented musicians to his side. In doing so for this album, their influence in songwriting was much in their own style, which left Ozzy’s part in an ill-fitting lurch.

The album's musical construction comes into direct and battered conflict with its squeaky clean production. As with all Ozzy products since his departure from Black Sabbath, "Scream" is polished to high Heaven, but the riffs lose their teeth in the effort. There's plenty of raucous noise, but it’s grit-free for the most part.

It is also readily evident that the producers Ozzy and Kevin Churko went to incredible, superhuman lengths to hide deficiencies in Ozzy's voice. His vocals are set back from the music, and even at that have been layered, echoed, tweaked and affected to a hospital caliber of antiseptic sterility. Not until the latter half of “Scream” does any single vocal line sound characteristically like Ozzy.

There are some singularly Ozzy-esque moments, but they come mostly in the form of the ballads that Ozzy has been writing for two decades. The metal community gives Ozzy a lot of leeway to write these songs, where most musicians might not be given the benefit of the doubt. The fact that he’s only hit a couple of times in those attempts seems to be enough for Ozzy to keep trying. “Life Won’t Wait” is grandiose and loud to the rafters, but lacks the certain charm that “Mama I’m Coming Home” channeled so long ago. Songs like “Crucify” are good but sound a touch out of date, and some others like “Fearless” work to a better degree. Each song seems to have at least one section where Ozzy tried to create a thundering piece to tie it all up. Some of them fit better than others. Still, while there are bright portions, there’s nothing that made me stand up and shout.

“I Want it More” is the album’s best offering. It possesses many good qualities, from a high-octane distorted galloping riff, to a flying, over-the-top, hop-in-the-time-machine-and-enjoy-the-memories solo from Gus G. Really, it sounds like what Fireball Ministry’s latest album should have sounded like.

Let me single out Gus for a moment. He does nearly nothing wrong from beginning to end. His playing is precise, rising from the mix with virtuosity one moment, and then seamlessly blending in the next. His accents are sharp, his riff selection superb and his soloing out of this world.

I feel like I’m being too harsh on “Scream.” I urge you not to discard it out of hand for being an album from a man who perhaps doesn’t have the chops he used to. If you’re prepared to accept its faults, “Scream” can be an entertaining listen for the quality of its guitar work alone. The music in its best moments is honestly captivating. The album lacks whatever immaterial quality it was that made “No More Tears” work so well, but that quality could have been made unattainable simply be the passage of time, and the changing of eras. In any event, “Scream” is superior to “Black Rain,” “Under Cover” and possibly “Down to Earth.”

If Ozzy’s worst fault is that he has too much pride to give up doing what brings him so much joy, is that really so deserving of disdain? It doesn’t mean that we as listeners have to give our time and money to it, but we also can’t fault the man for trying.