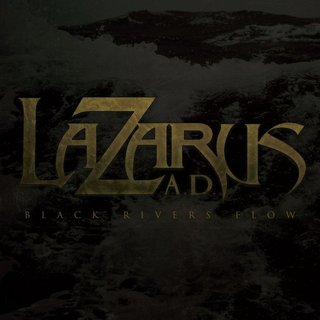 "The Onslaught," the debut from Wisconsin thrashers Lazarus A.D. was, to speak plainly, brilliant. So it was with great anticipation that the metal universe greeted the coming of the band's follow up, "Black Rivers Flow." This new effort is similar but ever so different from its predecessor and equally masterful in its own right.

The first sacrifice in the learning process from the band's magnificent debut is musical "fat." "Black Rivers Flow" trims out the wandering that made "The Onslaught" get lost in spots and streamlines the entire production. The result is a punishing, gleefully concussive effort that finishes off cleanly at a sleek forty-one minutes. The new slimmer presentation keeps intact "The Onslaught's" feeling of chewing on nails, which is an absolutely essential piece of the Lazarus A.D. puzzle.

“Black Rivers Flow” may not have the proverbial pedal to the floor at all times, but the trade off is an increase in refinement. For better or worse (and on this new album, it is both depending on which track,) the band has learned how to contain their fury into shorter, focused bursts. This makes the verses more intelligible and accessible, rather than keeping the volume up full bore all the time. The verses as a result can occasionally lack immediacy, but only studious and attentive metal fans will notice. John Q. Headbanger is unlikely to sense so subtle a shift in the band’s composition style.

Not so different from Keyser Söze (or the Devil,) the greatest trick Lazarus A.D. played on the world was convincing everyone that they are just a speed metal band. This is not nearly the case. Strip away the swirling maelstrom of noise and what remains is the deep soul and riff-centric, fist-pumping nature of the writing. What separates Lazarus A.D. from the quagmire of modern speed metal is their ability to recognize and compose a riff that is not just fast, but based on a precise cadence and peerless timing. That, coupled with the band's talent for layering harmonies and guitars inside a blistering sonic assault and "Black Rivers Flow" is far more than just another brainless thrasher.

True to form for Lazarus A.D., the songs on “Black Rivers Flow” unfold further with each new listening, as the permutations of beat and structure blossom after the first impression. “The Ultimate Sacrifice” and the title cut seem at first to be sort of stock thrash songs, but then they develop into multi-faceted concepts with contrasting percussion and guitar lines. Just like “The Onslaught,” this new effort is tremendously addictive and possesses an incredible, meaty constitution.

At first blush, the melodic vocal interjections seem a touch off-putting. However, as the songs featuring them such as “Casting Forward” evolve, they lend the pieces a depth and ability to gear down that the band’s first album lacked. It’s an effective contrast and speaks to the same shadow of a shift in style that was alluded to earlier.

Dan Gapen is not the type of guitarist who can solo at the drop of a hat. He needs a running start and has to be launched from some type of breakdown before he can fly free. In this regard, the music is granted a very organic feel, because the listener can almost see Gapen in his or her mind's eye as he hears the rhythm and decides his own soloing sequence in accordance. Gapen is a calculating player who sprays notes with precision, particularly in the solos for "Light a City (Up in Smoke)" and possibly his most impressive effort on the album, "Through Your Eyes."

"Eternal Vengeance" begins with a curious, peaceful guitar medley that is just slightly reminiscent of Alice In Chains' "When the Sun Rose Again." It seems ill-advised at first, given that the band has no reason to try and expand into a softer style of song-writing. Still, faith is quickly restored as the track launches into a brutal downbeat, followed by the now trademark ferocity.

"Black Rivers Flow" is equal to the game-changing achievement that "The Onslaught" was, and is a more than excellent companion to that effort as well as a second stellar entry from an incredibly talented band. There are no bad cuts on this album. Lazarus A.D. is clearly established in the vanguard of American heavy metal and seems outfitted to stay there. “Black Rivers Flow” is genius, and it gets better the louder it is when you hear it, so turn your speaker to 11.